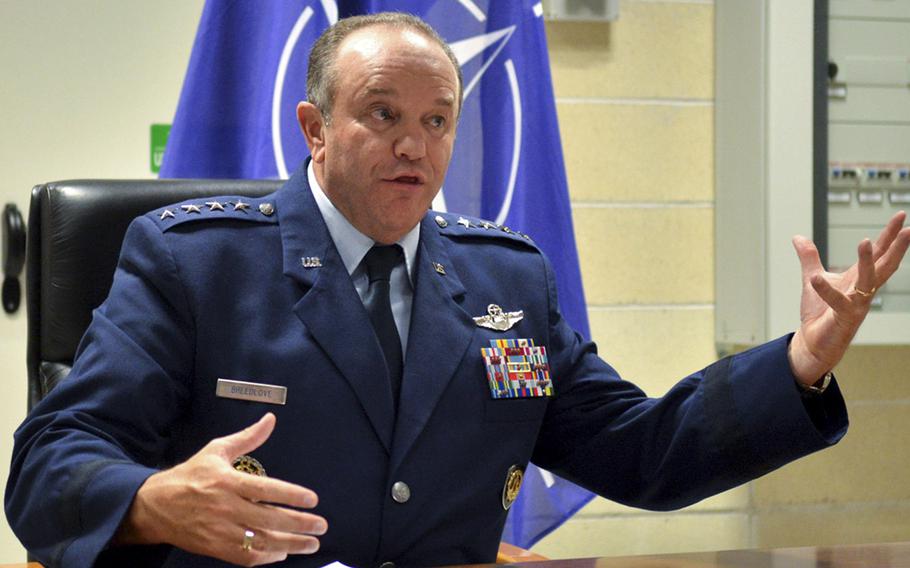 Gen. Philip M. Breedlove, commander of U.S. European Command and Supreme Allied Commander Europe, made his comments to reporters after a change of command ceremony at the NATO headquarters here, one of two subordinate operational commands in the alliance.

Breedlove called for an independent investigation into the crash. Besides evidence U.S. officials have already offered, he mentioned equipment that had been moved from western Russia to the Rostov area, “where it was used to train [separatists] and then moved into eastern Ukraine and then again see it departing also eastern Ukraine afterwards.”

The statement echoes Secretary of State John Kerry’s claim on Sunday that Russians trained separatists in eastern Ukraine on the SA-11 air defense battery, which the U.S. believes was the weapon used to shoot down Malaysian Airlines flight MH17. All 298 passengers and crewmembers aboard the plane were killed.

Breedlove said further investigation was needed to determine the role, if any, of the Russian military in firing the missile that struck the airliner.

The general also used the news conference, attended mostly by Italian journalists, to underline the need for changes to NATO posture during the alliance’s summit in September.

Breedlove said Russian actions in Ukraine require a retooling of the NATO Response Force — a military unit combined from member nation forces stationed across Europe — as well as the creation of new headquarters focused on Article 5 military response in Europe’s north and south. Article 5 requires NATO members to support one another in case of attack.

He also said that NATO needs to position resources forward on its eastern flank in response to the concerns of nations close to Ukraine.

“Pre-positioned supplies, pre-positioned capabilities and a basing area ready to rapidly accept follow-on forces,” he said. “And how we man that in a rotational or nonpermanent basis is what we’re looking at now to propose in NATO and we will be looking at that with the (North Atlantic Council).”

Poland, in particular, has argued for forward supplies and permanent bases to be moved to eastern member states, a measure opposed especially by Germany, which claims a 1997 agreement between Russia and NATO prohibits such a shift. Poland argues the agreement, known as the Founding Act, is no longer valid after Russia’s annexation of Crimea in the spring.

Italy, like Germany and France, has balked at harsh measures toward Russia favored by countries like Poland.