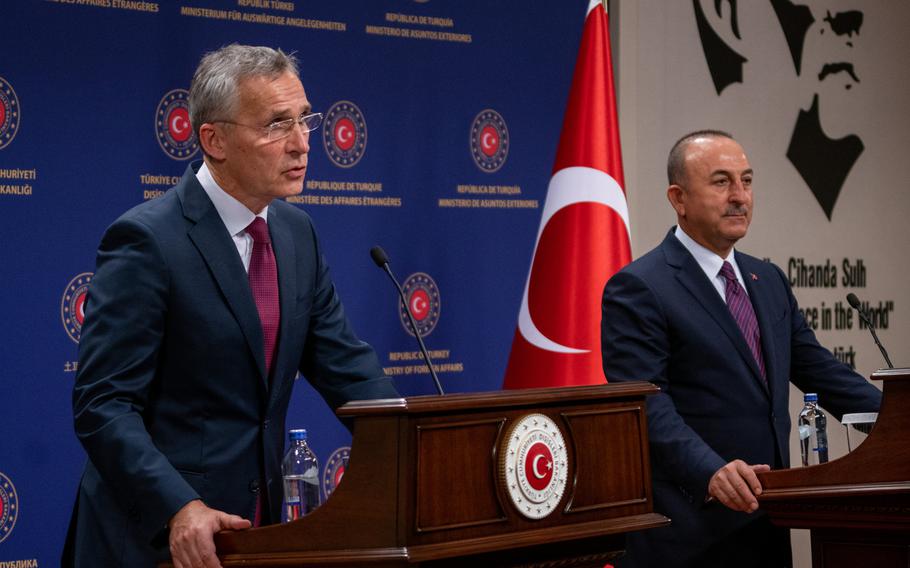 NATO’s top official on Monday called on Turkey to use its influence to reduce tensions between Armenia and Azerbaijan, which are locked in a violent territorial dispute in which scores of civilians are reported to have died since July.

“We are deeply concerned by the escalation of hostilities” over the Nagorno-Karabakh enclave, NATO Secretary-General Jens Stoltenberg said at the start of a two-day visit to Turkey. “All sides should immediately cease fighting and find a way forward, toward a peaceful resolution.”

Stoltenberg, who was slated to meet with President Recep Tayyip Erdogan during his visit, said Turkey has a responsibility to “use its considerable influence to calm tensions.”

But Turkish Foreign Minister Mevlut Cavusoglu questioned why NATO and others in the international community were not backing Azerbaijan in the fight over Nagorno-Karabakh, which is in Azerbaijan but predominantly inhabited by Armenians.

Blaming Armenia for starting the hostilities and of deliberately targeting civilians during months of the new round of clashes, Cavusoglu said through an interpreter at a news conference: “From the perspective of law and morals, everyone should support Azerbaijan. But, as you have mentioned, all international organizations and countries either try to be very balanced or they are making statements in support of Armenia.”

Turkey and oil-rich Azerbaijan have strong ethnic, cultural and historic ties, while Ankara has no diplomatic relations with Yerevan. It sealed its border with Armenia in 1993 as a previous yearslong conflict between the two former Soviet republics over Nagorno-Karabakh drew to a close, with Armenia establishing control over the territory.

Turkey would, if asked by Baku, provide support to Azerbaijan in the current dispute, Cavusoglu said, but insisted that the Azeris have not asked for Ankara’s help.

Allies fear Ankara’s potential involvement in the clashes could escalate the violence. The crisis was one of “a number of difficult issues” NATO wants to resolve with Turkey, Stoltenberg said.

Another was Turkey’s recent acquisition of a Russian air defense system, the S-400, he said. Turkey was kicked out of the U.S. F-35 program last year after the first batteries of the anti-aircraft system, which Turkey purchased in 2017, were delivered. The U.S. fears Russia could use the S-400 system to gather intelligence on the fifth-generation jet and possibly compromise its stealth technology.

“The (S-400) system can pose a risk to allied aircraft and can lead to U.S. sanctions,” Stoltenberg said. “This is a national decision for Turkey to make, but the S-400 cannot be integrated into NATO’s air and missile defense systems. I urge Turkey to work with other allies to find alternative solutions.”

Seeking to resolve yet another issue with Turkey, NATO has established a deconfliction hotline that Ankara or Athens can call to resolve flare-ups in their energy rights dispute in the eastern Mediterranean, Stoltenberg said.

Cavusoglu thanked the alliance for its efforts but blamed the tensions squarely on Athens, while Stoltenberg said he hoped “the underlying disputes can now be addressed purely through negotiations.”