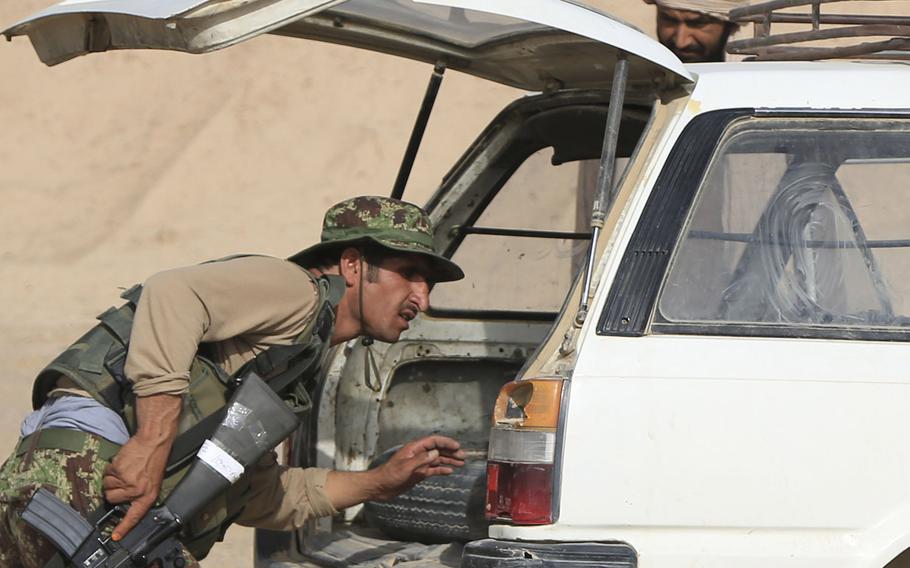 In a July, 2014 file photo, an Afghan National Army soldier inspects the trunk of a vehicle at a security vehicle checkpoint near the Shekasteh Tappeh village in Helmand province. (Dustin D. March/U.S. Marine Corps)

KABUL, Afghanistan — NATO will continue to back a new Afghan military strategy aimed at reducing the number of roadside checkpoints across the country, despite a recent spike in highway abductions.

In the latest incident on Tuesday, the Taliban captured about 60 people from several vehicles in southern Helmand province, later releasing all but 27, The Associated Press reported. Local officials said Wednesday that all of the remaining detainees had been released.

More than 200 people have been detained by militants on Afghanistan’s roads since the end of May. Most have been freed, but 21 commuters were executed.

The Taliban say they have been targeting soldiers and government officials.

Haji Naseem Ayoubi, who runs a bus company in Kabul, said many Afghans are now too afraid to travel at night and they are calling for change.

“We want the government to take this issue very seriously and provide road safety for passengers by ether putting checkpoints on the roads or eliminating insurgents from the insecure areas,” he said.

In the past, soldiers and policemen manned thousands of checkpoints throughout the country. But this defensive tactic spread Afghan forces too thin on the ground, a weakness the Taliban routinely exploited. The international coalition has long insisted that Afghan security forces should consolidate their forces in order to take the fight to the enemy.

“Instead of small checkpoints manned by two or three or five soldiers, we are creating central bases in one area that can be very strong and go and push the enemy,” said Gen. Mohammad Radmanish, deputy spokesman for the Afghan Defense Ministry. “It doesn’t mean that we are pulling out all of the checkpoints, it is just for better security that we are getting rid of the small ones.”

“In the past, checkpoints were lightly armed and presented a fairly vulnerable target, and many of the ANDSF casualties were suffered at checkpoints,” he said, using an acronym for the Afghan National Defense and Security Forces. “The Afghan security forces have begun to consolidate forces from these checkpoints, which has allowed them to generate more combat power.”