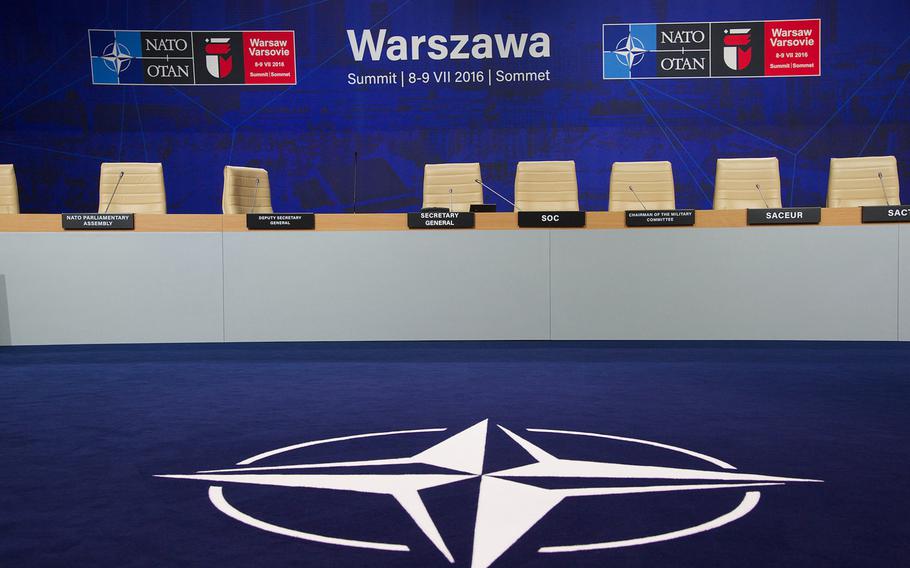 The two-day NATO Summit in Warsaw opened Friday, July 9, 2016. Alliance heads of state are expected to approve a plan to beef up the eastern flank by moving about 4,000 soldiers into the Baltics and Poland. (NATO)

WARSAW — NATO leaders approved on Friday a long-expected but controversial plan to base combat troops close to Russia’s border in the Baltics and Poland.

Allies hailed the initiative to set up four rotational battalions in eastern Europe, a move brought on by concerns about a more assertive Russia, as a “landmark” development.

“The four battalions will be multinational battalions, meaning that they will send a very clear message — that an attack on one ally will trigger the response from the whole alliance,” NATO Secretary-General Jens Stoltenberg said.

The deployments are set to begin in 2017.

But U.S. defense and security analysts on the sidelines of NATO’s summit in Warsaw described the effort as an important “first step,” as questions remain over whether allies can summon the unity for more robust defense measures in the months and years ahead.

For NATO, the plan to establish a rotational force led by the U.S., Germany, United Kingdom and Canada, has been the key agenda item during two days of talks among heads of state from the 28-nation NATO alliance and 26 partner nations. The effort also represents something of a compromise between eastern state allies who wanted a larger more permanent presence, and nations such as Germany who have advocated a more cautious approach, concerned about antagonizing Russia.

However, if NATO wants to have a credible deterrent capability in the east — where Russia outguns allies by a wide margin — more work needs to be done, U.S. defense and security analysts said.

“This is not the end of the road. This is a benchmark,” said Mike Carpenter, the Pentagon’s deputy assistant secretary of defense for Russia affairs during a panel discussion on the sidelines of the summit.

Next, allies must look at ways to enhance NATO’s maritime position in the Baltic and Black Seas and address insufficient air defense capabilities in places like the Baltics and Poland, he said.

Top U.S. military officials in Europe have warned Russia’s edge in regional firepower means it has the ability to restrict NATO access to the Baltics and Black Sea regions — known as Anti-Access/Area Denial. Yet, allies spend little time focused on developing their own capabilities in that area, experts say.

“You see a reluctance to address alliance capabilities in that regard,” said Heather Conley, a security expert with the Center for Strategic and International Studies. “We are not having that conversation” within NATO.

NATO on Friday, also declared that its missile defense efforts in Europe have reached “initial operational capability,” meaning that U.S. assets such as Aegis warships out of Rota, Spain, and American missile defense personnel in Romania and elsewhere can now operate within NATO command and control structures.

Stoltenberg said the shield isn’t directed at Russian ballistic missile systems, but threats outside of Europe. Russia has lashed out at the effort, calling the system a potential threat to its own missile deterrent.

As the U.S. military adapts, with plans to spend $3.4 billion on the European Reassurance Initiative — a program that will send more tanks and rotational troops to Europe — U.S. European Command also is transitioning to a “warfighting” headquarters, Carpenter said, adding that such a transformation is needed after years of pursuing soft power objectives.

NATO is now grappling with how to address areas of concern such as Russia’s capacity to deny allies access to areas such as the Baltics and Black Sea, if Moscow so chooses.

“NATO has agreed on a range of measures to ensure NATO’s unconstrained movement,” said a senior NATO official, who did not provide additional details.

Still, there appear to be divisions among NATO members on whether to pursue a more robust posture. Such a transition is sure to infuriate Russia — which has complained that the NATO build-up threatens its isolated enclave of Kaliningrad, nestled between Poland and Lithuania — and face possible resistance from Germany, which has sought a role as the middleman between Moscow and others in the West.

Polish Foreign Minister Witold Waszczykowski, a proponent for a larger NATO presence in his country, said Germany remains something of an obstacle when it comes to “appreciating the need” for more presence in the east.

German Foreign Minister Frank-Walter Steinmeier, in a newspaper interview in June, chastised allies for “saber rattling” in connection with large NATO exercises being carried out in places like Poland.

Berlin sees permanent forces in countries once a part of the Soviet Union’s Warsaw Pact as a violation of old Russia/NATO agreements. But Waszczykowski took issue with such assertions. For example, when a U.S. missile defense site becomes fully operational in Poland in 2018, he said, “it will constitute a permanent U.S. presence in Poland.”

The United States, one of four lead nations in the plan for rotational battalions, will send troops to Poland, President Barack Obama announced in Warsaw. The headquarters for a rotational heavy armored brigade also will be based out of Poland, he said.

Germany, Canada and the United Kingdom will lead the three other multinational battalions in the Baltics.

The reinforced units are to have about 1,000 troops each, numbers that are modest when compared to Russia’s forces across NATO’s border.

Yet while Russia enjoys an advantage in geography, NATO still invests far more than Moscow on defense, even as U.S. officials and NATO leaders press members to dedicate more resources to military matters. Only a handful of allies meet the NATO benchmark that calls for 2 percent of their GDP to be dedicated to defense, a sensitive matter that has led to accusations that Europe is a security free rider.

In 2015, NATO’s 28 states spent a total of $892 billion on defense, according to a recent NATO press release. European members accounted for $235 billion of that total.

In other moves in Warsaw, allies, as expected, agreed to approve plans for “a tailored presence” in southeastern Europe with a new multinational brigade in Romania, which is intended to help the flow of alliance forces into the region. In connection with that, NATO will be better positioned to assess options to meet its maritime and air needs in the region, the senior NATO official said.

“Several nations addressed the need for an enhanced presence at the sea and in the air,” said Stoltenberg, saying details are expected to be worked out in the months ahead.

And participants dealt with concerns about security to the south, where a migrant crisis is fueling concerns about Islamic State-inspired terrorist strikes on the Continent.

NATO also is considering a larger training role inside Iraq to support the U.S.-led campaign against the Islamic State group. Allies examined how to widen a maritime patrolling mission to support European Union efforts to regulate the flow of migrants, many of them from Syria, Afghanistan and Iraq. Now centered in the Aegean Sea, that mission is set to expand to the central Mediterranean.

Stoltenberg said leaders also have agreed to the deployment of NATO AWACS surveillance aircraft to support the U.S.-led coalition in Syria and Iraq.