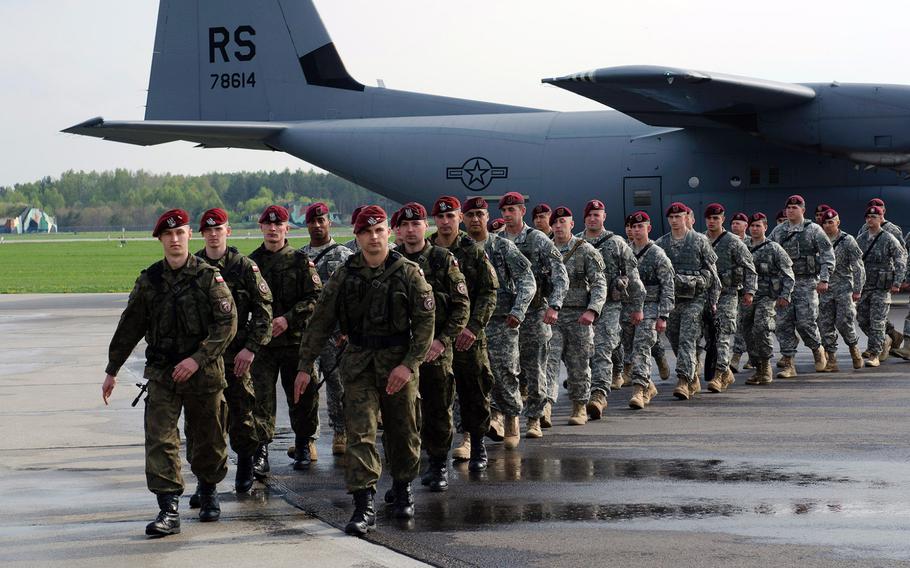 Paratroops from U.S. Army Europe's 173rd Infantry Brigade Combat Team (Airborne) march with their partners from the Polish army's 6th Airborne Brigade, in April 2014. NATO is likely to increase its presence in Poland, but the size and shape of that mission continue to be debated within the 28-nation U.S.-led alliance. (A.M. LaVey/U.S. Army)

NATO is likely to increase its presence in Poland in the future, but the size and shape of that mission continue to be debated within the 28-nation U.S.-led alliance, NATO and Polish leaders said Monday.

At NATO’s July summit in Warsaw, allies are expected to take steps to further reinforce the alliance’s eastern flank in response to concerns in the region over a more assertive Russia.

“I trust that after the NATO summit we will see more NATO in Poland than ever before,” said NATO Secretary-General Jens Stoltenberg during a joint news conference in Brussels.

Stoltenberg and Polish President Andrzej Duda offered few details about what NATO’s beefed up presence in Poland could look like. However, Duda, echoing past statements from leaders in Warsaw, said Poland continues to seek a more substantial NATO footprint.

“We want this to be a decisive summit so we can take precise, concrete decisions,” Duda said. “We need to demonstrate to a potential attacker that an attack on member states will not pay off.”

NATO continues to examine ways to reinforce its “security architecture” in the east and Poland, where Duda said he wants a presence that is “as permanent as possible.”

“We want NATO forces to be visible,” he said.

While Poland presses NATO for a concrete troop presence in the country, there continue to be doubts within parts of the alliance about establishing permanent bases and units in the region. German officials have stated such a move could exacerbate tensions with Russia.

Since Russia’s 2014 intervention in Ukraine, NATO has upped its rotational deployments to both Poland and the Baltics, but allies have avoided describing those missions as a permanent buildup. Still, NATO is now poised to press forward with a missile defense plan in Europe, which will involve an anti-missile base in Poland. A ground-breaking is expected on the site later this year, Stoltenberg said.

Meanwhile, there are no plans to move the location of NATO’s July summit from Warsaw, Stoltenberg said. In Europe, there has been growing concern over the newly elected government in Poland, which critics say has taken a hard, anti-democratic turn to the right. Critics have questioned whether it still makes sense for Poland to host NATO’s largest summit of the year.

Stoltenberg said NATO remains committed to the Warsaw event, but also stated that all allies most uphold democratic principles and the “rule of law.”