NATO and Afghanistan: a status report 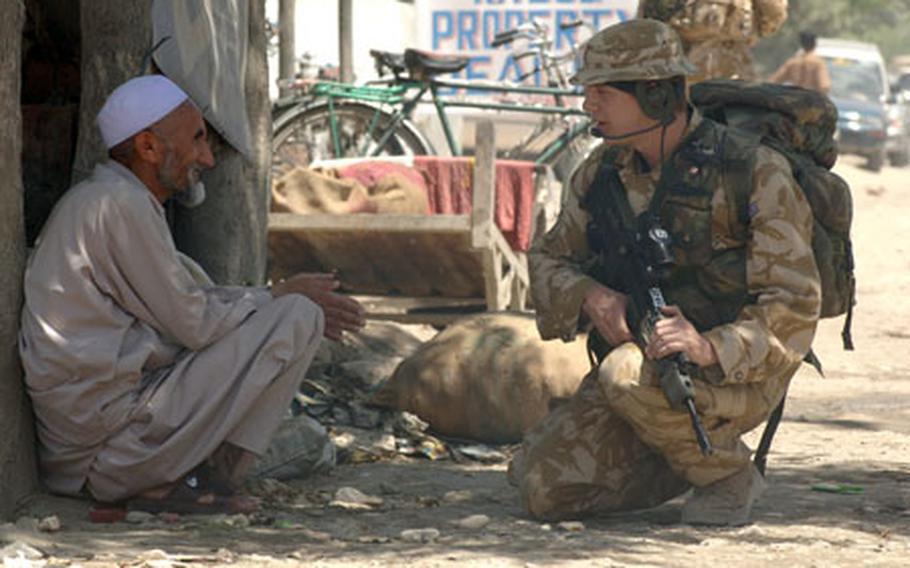 A members of the British army force protection company speaks with a Kabul man during a routine patrol of one of the districts in the city in this June file photo. The patrols were designed to give security and reassurance to the local people. (Courtesy of ISAF)

A members of the British army force protection company speaks with a Kabul man during a routine patrol of one of the districts in the city in this June file photo. The patrols were designed to give security and reassurance to the local people. (Courtesy of ISAF) 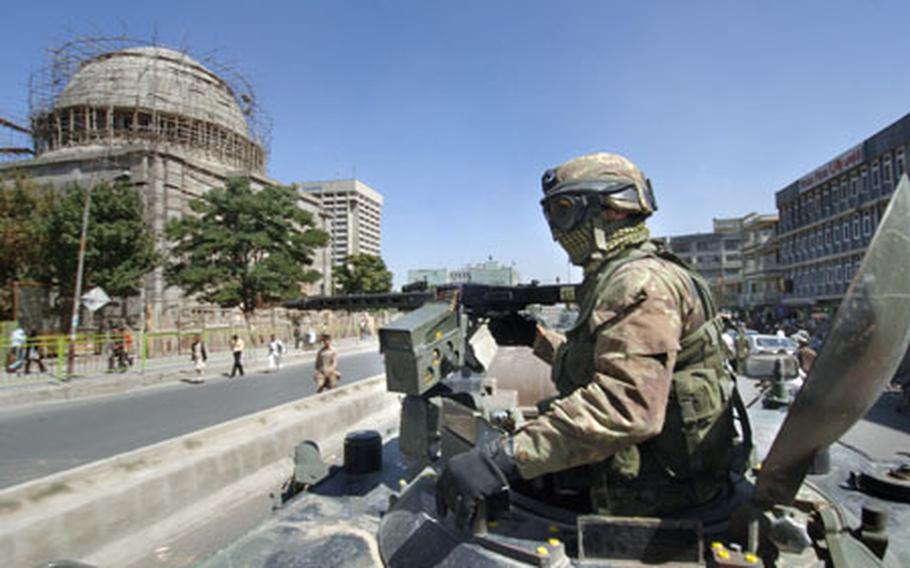 A member of the International Security Assistance Force patrols the streets of Kabul in this file photo. (Courtesy of ISAF) 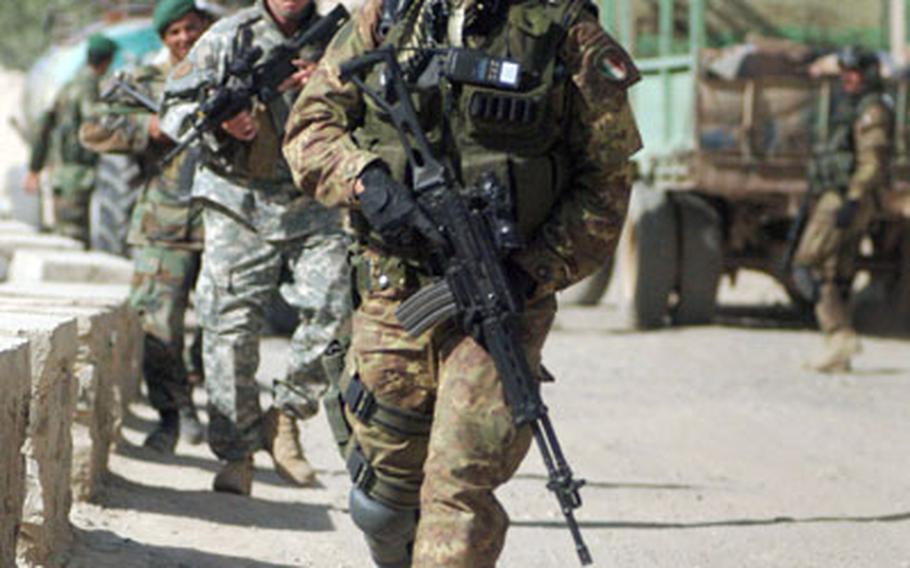 RHEINDAHLEN, Germany -- With the war in Iraq commanding so much attention, U.S. and NATO soldiers serving in Afghanistan last year took to kidding each other about the relative obscurity of their mission.

Eden was referring to the 1942-43 Battle of the Aleutian Islands, the last military campaign fought on U.S. soil. Some historians call it the &#8220;Forgotten Battle,&#8221; even though more than 3,200 U.S. and Japanese combatants died.

Some observers might take issue with that last point. But few would argue that 2006 was the bloodiest year in Afghanistan since the Taliban was toppled from in power 2001. Many of the numbers back that up.

According to a report last month by Human Rights Watch, an international nongovernmental organization based in New York City, &#8220;more than 4,400 Afghans died in conflict-related violence&#8221; in 2006. That&#8217;s twice as many as the year before, the report stated.

In Kabul, the capital city, and in southern and eastern Afghanistan, the number of improvised bomb attacks increased from 865 in 2005 to 1,745 in 2006, according to the U.S. military. Those figures don&#8217;t include strikes in the north and west, areas that are considerably calmer.

Casualties within the NATO-led alliance rose sharply, too.

NATO, which assumed command of all foreign troops in Afghanistan last fall, suffered 65 combat deaths in 2006, based on a review of data from iCasualties.org, a Web site that tracks war casualties. Another 28 troops from the coalition died in nonhostile incidents, including 17 who were killed in three separate aviation accidents.

Last year&#8217;s combat losses well exceed the total for 2005, when seven died. In fact, nearly three times as many NATO soldiers died in combat last year than in the four previous years combined, when 24 died.

(For U.S. forces, the casualty count for Operation Enduring Freedom &#8212; both hostile and nonhostile &#8212; was eerily similar for the last two years. In 2006, the United States lost a total of 98 servicemembers, one less than in 2005. Nonhostile deaths for each of the past two years were 33.)

While the numbers for NATO pale in comparison to the stats coming out of Iraq, the upward trend is notable nonetheless.

So what do the increases mean?

Media reports throughout the year, especially in the second half, attributed the rise in attacks to the Taliban reconstituting itself. And there were concerns about NATO&#8217;s reliability as an effective fighting force, something British army Gen. David Richards, commander of NATO&#8217;s International Security Assistance Force, or ISAF, scoffs at.

&#8220;The fact is the Taliban failed to achieve a single one of their stated military objectives in 2006,&#8221; Richards told reporters at a Feb. 9 homecoming gathering for NATO&#8217;s Allied Rapid Reaction Corps.

Instead, Richards said, the reason for the increase in insurgent attacks largely is due to the coalition taking the fight to the enemy like never before. The ISAF rotation that Richards led marked the first time in NATO&#8217;s history that it conducted a land campaign against an enemy force, despite his having only 80 percent of the troops originally promised.

Two weeks earlier, U.S. Army Maj. Gen. Benjamin Freakley said during a Pentagon news briefing that the enemy has grown desperate, which explains the increasing use of improvised bombs. Battlefield losses aside, he noted, the Taliban-led insurgency has suffered other setbacks, such as the more than 600 munitions caches seized and the death or capture of over 250 bomb makers.

Freakley, who at the time was the commander of Combined Joint Task Force &#8212; 76, the senior American headquarters in Afghanistan, said some press reports make it seem like the coalition is on its heels.

&#8220;If I could get across one message today, I would say that in the last year, it is the U.S. force and the International Security Assistance Forces have been on the offensive,&#8221; he said. &#8220;We have been into more valleys and remote locations in the last year than probably in any area since this began in 2001.&#8221;

When he was the ISAF commander, Richards lobbied for at least 2,500 more soldiers, essentially asking for the forces that were pledged by the 26-member NATO alliance and the 11 other nations in ISAF. That shortfall was addressed late last month when the Pentagon announced it was extending the tour of the 3rd Brigade, 10th Mountain Division by up to four months. Currently, there are about 35,500 U.S. and coalition forces in Afghanistan under NATO command. The U.S. has an additional 12,000 troops who report to the U.S. Central Command.

&#8220;By the end of this year, the Afghan National Army and police, thanks to billions of dollars being spent on them by the U.S.A., will start to be able to take much more of the strain,&#8221; Richards said. &#8220;My line is: One more year&#8217;s hard work and we could succeed in Afghanistan beyond our wildest dreams. But it needs another year&#8217;s hard work and commitment by all the 37 nations of NATO/ISAF.&#8221;