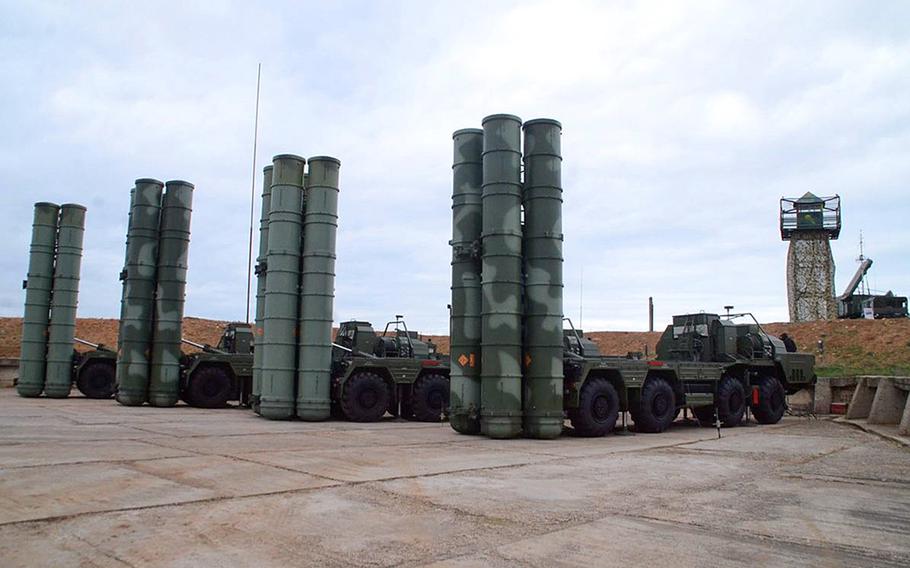 Russian S-400 surface-to-air missile launchers in Sevastopol in 2018. Turkish President Recep Tayyip Erdogan says the system, whose purchase has caused tension with Washington, will be delivered within days. (Courtesy of Russian Defense Ministry)

STUTTGART, Germany — Russia will deliver its advanced S-400 air defense system to Turkey within the next few days, said Turkish President Recep Tayyip Erdogan, who has shown no sign of backing away from a deal that has drawn warnings of sanctions from Washington.

Erdogan told Turkey’s NTV television on Monday that delivery of the S-400 Triumf system will happen any day now, and that he told President Donald Trump it was happening. The contract, signed in December 2017, is worth $2.5 billion.

“Within 10 days, maybe within one week, the first shipment will have arrived. I told Trump this openly,” said Erdogan, as quoted by Turkish media.

Turkey’s plan to acquire the long-range system has been met with fierce opposition from the Pentagon, which has warned that the long-time NATO ally will be cut off from deliveries of America’s new F-35 fighter if it moves forward with the Russian system.

For the U.S. military, deploying Russian-made air defenses inside a NATO country poses a technological security risk for the F-35. The Russian system also isn’t compatible with other NATO weapons systems, according to allies.

The broader ramifications for Turkey’s relationship with the U.S. are unclear.

Turkey has said it expected Trump to issue a waiver after Secretary of State Mike Pompeo said the country could face penalties under the U.S. Countering America’s Adversaries Through Sanctions Act, Reuters reported in May. At meeting of the G-20 in Japan last week, Erdogan said Trump told him there would be no sanctions.

On Saturday, Trump was noncommittal about the issue of sanctions and blamed former President Barack Obama for Turkey’s decision to acquire the S-400, saying that the previous administration had blocked Turkey from purchasing the U.S. Patriot missile system.

“They wouldn’t let him buy the missile he wanted to buy, which was the Patriot,” Trump told reporters during the G-20 talks in Osaka. “You have to treat people fairly. And I don’t think (Erdogan) was treated fairly.”

In 2013, the Obama administration did offer to sell the Patriot system to Turkey. But when Erdogan sought a technology transfer that would have enabled Turkey to produce its own missiles, the U.S. balked at the deal.

The Trump administration also has cleared the sale of Patriots. Turkey, however, remains committed to the Russian system unless Washington comes up with a better deal.

“One S-400 is worth three Patriots,” Erdogan told Turkey’s NTV. “If the conditions are even equal to the S-400 (deal), we would buy Patriots, but if they are not, then we have to think of our interests.”