NATO allies beef up their forces in southern Afghanistan 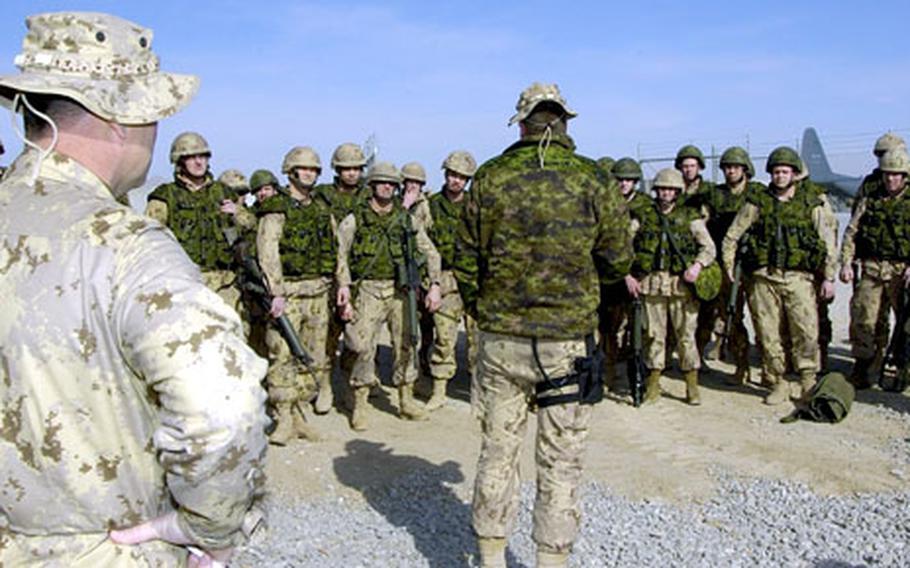 KANDAHAR AIRFIELD, Afghanistan &#8212; The American presence in southern Afghanistan is shrinking a bit. But there will soon be more troops in the region, which falls under command of the Combined Joint Task Force-76.

The missing link in the equation comes in the form of three NATO allies who are making heavy contributions into the area that has been largely controlled by U.S. forces since the Taliban was toppled in late 2001.

&#8220;They will have many more troops than I ever had for the same battle space,&#8221; said Col. Kevin Owens, the commander of the 173rd Airborne Brigade, which recently gave up control of Regional Command-South.

Taking over is Combined Task Force Aegis, a multinational effort headed by Canadian Brig. Gen. David Fraser. The effort will center on four provinces, with the Canadians in charge of Kandahar, the United Kingdom moving in Helmand, the Dutch controlling Oruzgan and the Americans maintaining Zabul.

&#8220;Being an international force does pose a few more challenges than for an individual nation,&#8221; said British Col. Chris Vernon, executive officer for the task force. &#8220;But if you&#8217;re clever about it, you can take the best from every organization.&#8221;

A look at the three new players in the south:

CanadaThe Canadians are already on the ground, with about 2,000 soldiers conducting missions.

&#8220;This is a major event for Canadians to be the lead in an organization like this,&#8221; said Col. Tom Putt, deputy commander of Task Force Afghanistan &#8212; the name Canada uses for its forces in country.

The main ground forces are centered around a battalion from the Princess Patricia&#8217;s Canadian Light Infantry (Regiment). The battalion has an array of specialty units attached with all forming Task Force Orion.

Other than the slightly different uniforms, local Afghans in the province shouldn&#8217;t notice a difference between the Canadians and the Americans, Putt said.

Canadian forces will be headquartered at Kandahar Airfield, but will spread out throughout the province and establish their own operating bases. The headquarters element will deploy for nine months, with those in Orion serving six months.

He said troops are solidly behind the mission.

[United KingdomThe British, with strong historical ties to Afghanistan, will be beginning a new chapter when they enter Helmand, a province Vernon labels &#8220;the drug capital of Afghanistan.&#8221;

The Helmand River has been used to irrigate large fields of crops for decades. Many of those fields now produce opium.

Vernon said British forces won&#8217;t be concentrating on stopping the drug trade themselves.

British forces will number around 2,500 in the province, with another 500 at Kandahar Airfield. The 3rd Battalion, Parachute Regiment will field the main force, with artillery, engineer and logistical troops attached. A Danish reconnaissance squadron and a squadron from the Household Cavalry Regiment will range far afield. About 200 personnel will integrate themselves in local Afghan army units to serve as trainers.

NetherlandsThe Dutch were the last of the three to agree to field a force and will be the last to arrive. They&#8217;re expected to start moving into southern Oruzgan in late summer. American forces will initially operate in the north of the sector.

Dutch Col. Willem van den Bos, the deputy commander of Task Force Aegis, said about 1,200 troops will deploy, composed mainly of elements from an airborne brigade and a mechanized infantry unit. They&#8217;ll also operate their own helicopter assets and there&#8217;s a plan to move Dutch F-16s currently based in Kabul to Kandahar when it can support them.

Sending such a sizeable force to Afghanistan was a controversial subject in the Netherlands, and NATO partners had to sweat out a vote in the country&#8217;s parliament.