Nations seek ways to cooperate on a range of Arctic issues 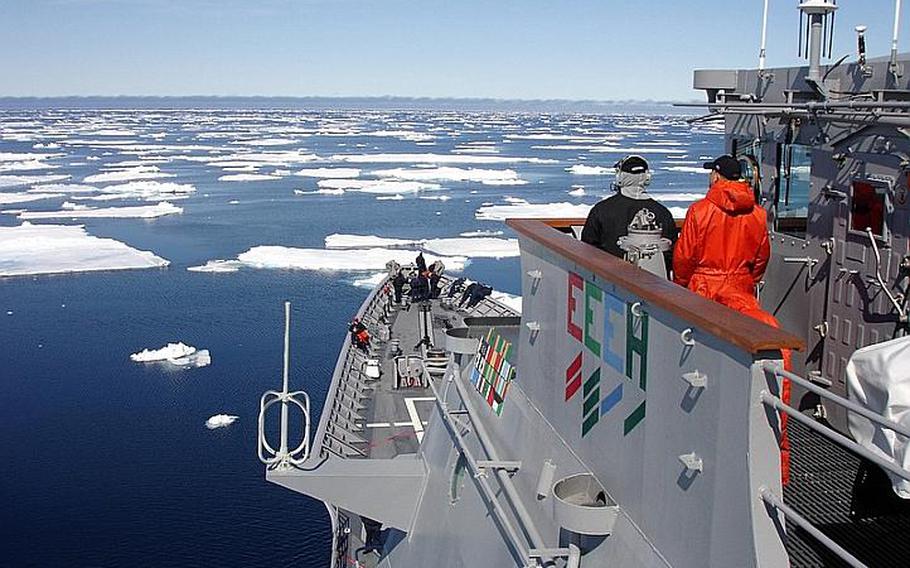 Crewmembers stand watch aboard the guided missile cruiser USS Normandy as the ship navigates an ice field north of Iceland in 2007. Twelve nations gathered this week in Bodo, Norway, to seek ways to cooperate on issues such as communications and search and rescue in the increasingly strategic Arctic region. Ryan Birkelbach/Courtesy of the U.S. Navy ()

STUTTGART, Germany &mdash; Looking for ways to become partners rather than competitors in the increasingly strategic Arctic region, 12 nations wrapped up a two-day security conference in Bodo, Norway, on Thursday focusing on such issues as communications and search and rescue.

While some Arctic watchers have expressed concern about the potential for conflict in the so-called High North, where new shipping lanes could open in the years ahead as ice caps melt, officials at U.S. European Command said they see other challenges, such as increased demand for search and rescue as maritime traffic increases.

During the Arctic Security Forces Roundtable, military officials focused on ways to bolster communication capacity in the region and prepare for increased maritime activity that could come with new shipping lanes.

&ldquo;We spend a lot of time talking about communication,&rdquo; said Schissler, making his first visit to the Arctic. &ldquo;There&rsquo;s not a robust communications infrastructure here.&rdquo;

In the years ahead, Schissler said he expects to see more regional investment in communication technology capable of operating in frigid Arctic temperatures. Equally important at the Bodo conference was getting representatives from each Arctic nation and other European countries to the table, he said.

&ldquo;Not to single one nation out, but having Russia at the table matters,&rdquo; said Schissler, EUCOM&rsquo;s director of strategy and policy.

For Russia, the Arctic has long been a major strategic priority, making it a key player in the region. Five years ago, Russia sent a message to the world when it planted its flag beneath the ice on the ocean floor, symbolically staking its claim.

But while Arctic nations have squabbled over territorial boundaries, there have been signs of cooperation. In 2010, Russia and Norway signed a treaty that ended a four-decade dispute over maritime borders in the Arctic. And just last week the U.S. and Norway completed a trilateral Arctic exercise with Russia. Dubbed Northern Eagle, the exercise involved activities ranging from communication drills and maritime interdiction operations to search-and-rescue and command-and-control missions.

For the U.S. and other Arctic nations, melting sea ice has brought added attention to the region. On Monday, the National Snow and Ice Data Center reported that sea ice melted to 1.58 million square miles, its lowest extent since 2007.

While melting ice represents a &ldquo;maritime opportunity&rdquo; as shipping lanes open, those interests must be balanced against environmental concerns, Schissler said. That includes taking steps to ensure the protection of fisheries, which are a key part of Arctic nation economies, he said.

&ldquo;It&rsquo;s valuable for the whole world,&rdquo; Schissler said. &ldquo;Protecting the Arctic is going to have an effect on everybody.&rdquo;