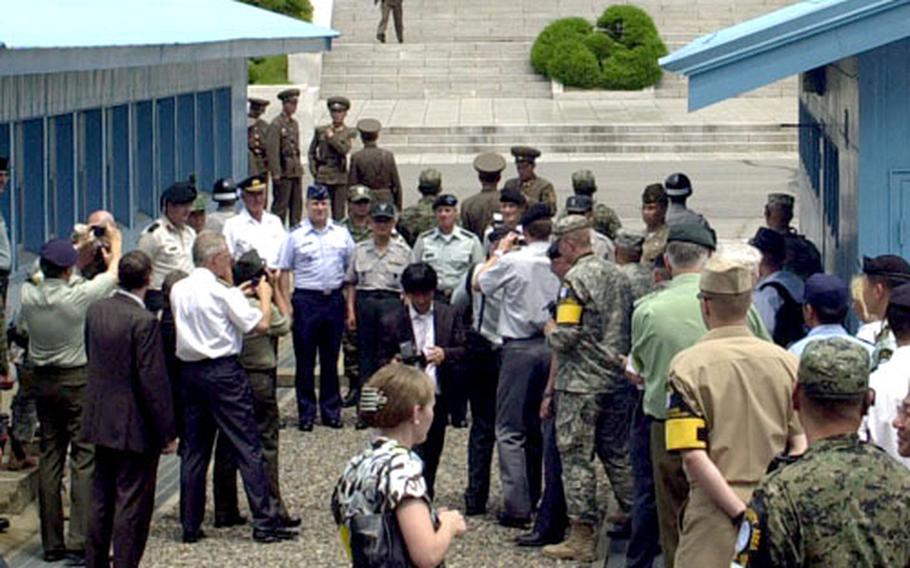 U.S. Forces Korea commander Gen. Walter Sharp, center, poses for photos at the Demilitarized Zone in Korea, as North Korean soldiers pose for photos of their own behind him on the other side of the Demarcation Line. Sharp was at the DMZ Monday for a ceremony marking the 56th anniversary of the armistice that ended Korean War hostilities. (Jon Rabiroff / S&S)

U. S. Forces Korea commander Gen. Walter Sharp, with his back turned to North Korean soldiers an arm&#8217;s length away, stood for photos after a ceremony Monday marking the anniversary of the armistice that ended Korean War hostilities.

As he posed with many of the 75 dignitaries on hand, including U.S. Ambassador Kathleen Stephens, more than a dozen North Korean soldiers took turns themselves posing for photos with their backs to the visitors across the Demarcation Line that divides the DMZ.

The pose-down, with everyone crowded in between two conference buildings, was just another example of the psychological one-upmanship that has become routine at the DMZ.

The Korean War began in 1950 and, although a peace treaty was never signed, it essentially ended with the signing of an armistice agreement on July 27, 1953. That pact provided for the transfer of prisoners of war, the creation of the DMZ and the end of open hostilities.

In the decades since, North and South Korea have repeatedly traded accusations that the other has violated the terms or spirit of the armistice. In recent months, tensions between the two countries have risen in the wake of North Korean nuclear and missile tests, as well as threats that have been condemned by the United Nations.

Sharp referenced that in his remarks during Monday&#8217;s ceremony, saying, "Recent actions by the Democratic People&#8217;s Republic of Korea to challenge the United Nations Security Council decisions demonstrate the continued requirement for the armistice agreement.

"The armistice will remain as vital and relevant a mechanism to the international commitment to security and stability in the region as when it was signed 56 years ago, despite external threats and challenges," he said.

Major-Gen. Jang Yong-koo of the U.N. Command Military Armistice Commission thanked representatives of those countries who have supported terms of the armistice and then raised a glass to offer a toast: "Peace on the peninsula."