Buy Photo
A Russian-designed extra-vehicular space suit is one of the highlights of the Into Space section at the National Space Centre in Leicester, England. Nearby, you can learn about the many layers of materials needed to protect astronauts from the extreme conditions of space. (David Hodge/Stars and Stripes)

Buy Photo
A Russian-designed extra-vehicular space suit is one of the highlights of the Into Space section at the National Space Centre in Leicester, England. Nearby, you can learn about the many layers of materials needed to protect astronauts from the extreme conditions of space. (David Hodge/Stars and Stripes) 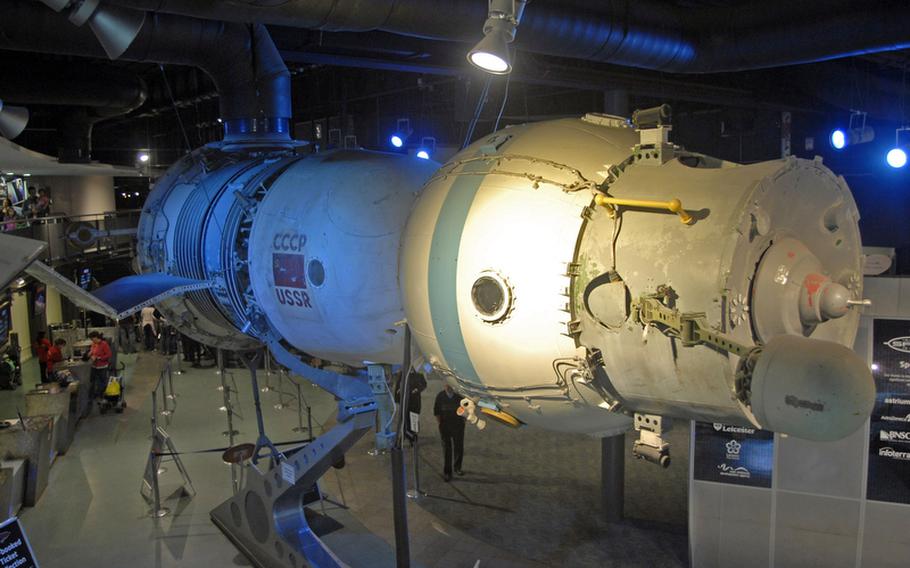 Buy Photo
The 42-meter tall Rocket Tower dominates the skyline at the National Space Centre in Leicester, England, as patrons walk toward the exhibition's main entrance. (David Hodge/Stars and Stripes) 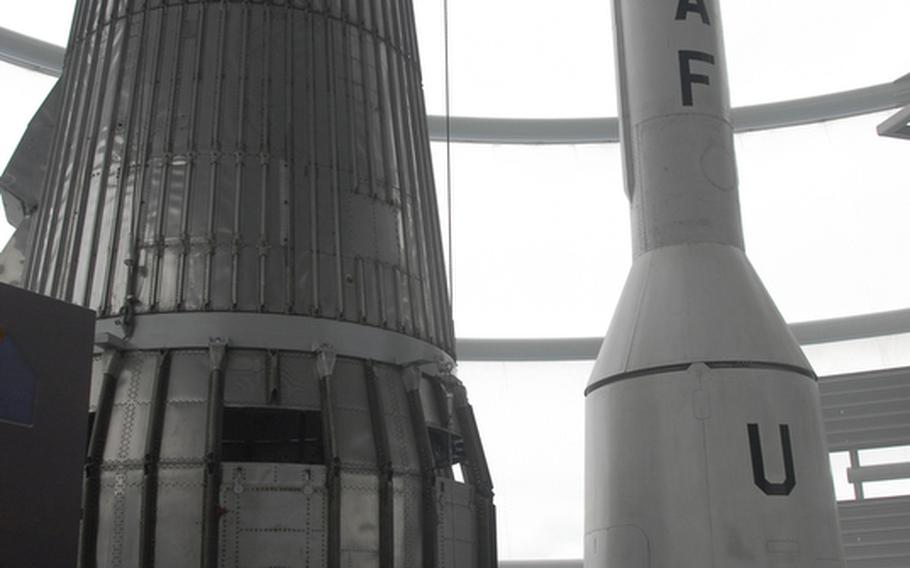 Buy Photo
From the second level of the Rocket Tower at the National Space Centre, the tops of the British-designed Blue Streak and the U.S.-built Thor Able rockets can be viewed. (David Hodge/Stars and Stripes) 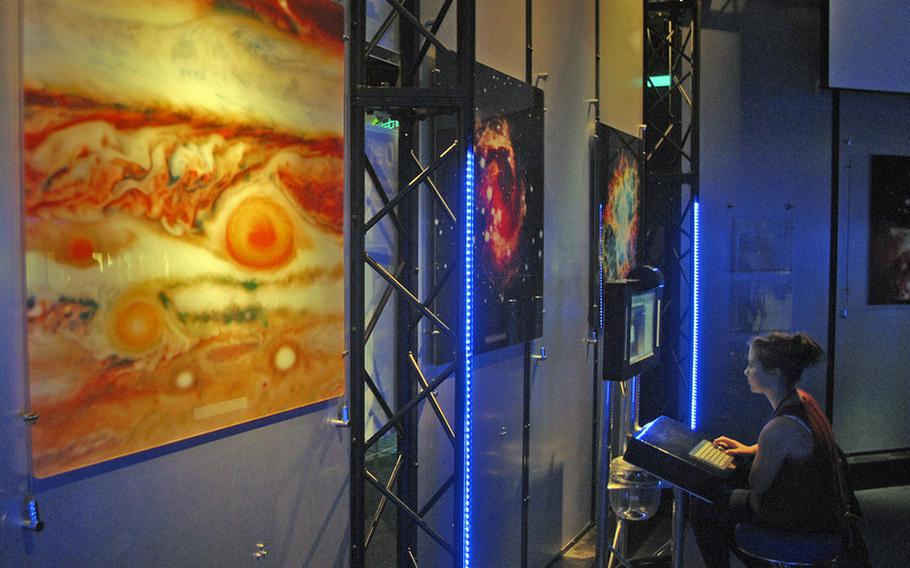 Buy Photo
A picture depicting colorful weather patterns on Jupiter adorns the wall at the National Space Centre in Leicester, England, while a patron uses an interactive display. (David Hodge/Stars and Stripes) Buy Photo
A mother watches over her two daughters as they learn about the cosmos through interactive activities at the National Space Centre in Leicester, England. (David Hodge/Stars and Stripes) Buy Photo
The Weather Pod attraction at the National Space Centre in Leicester, England, allows anyone to become a meteorologist and read the weather for the United Kingdom. (David Hodge/Stars and Stripes) 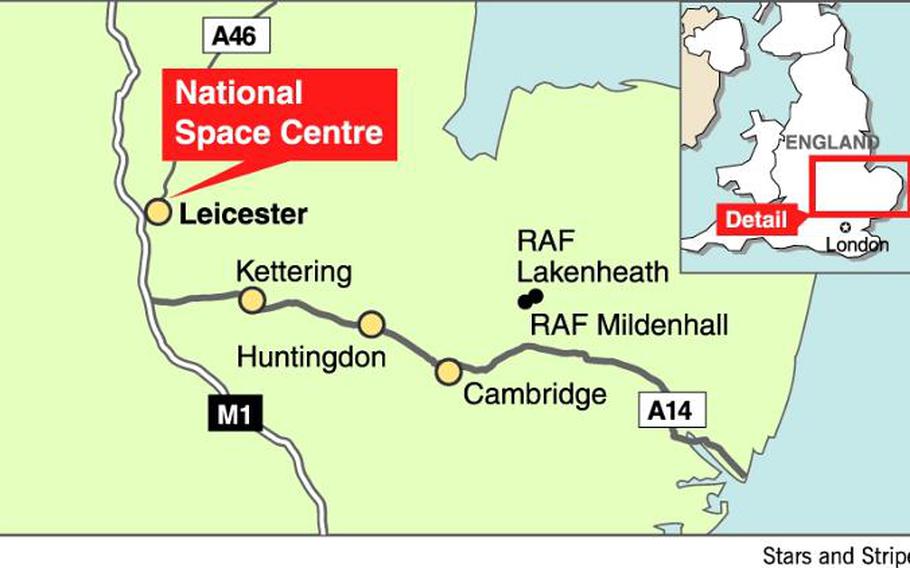 For a true out-of-this-world experience &mdash; without the hassles or expense of leaving Earth&rsquo;s orbit, enduring cramped living arrangements or undergoing extensive astronaut training &mdash; visit the National Space Centre in Leicester, England, to see space hardware and learn about the history of space research and exploration.

You needn&rsquo;t be a space enthusiast to enjoy the many activities.

The Space Theatre is otherworldly &mdash; at least it can be for those who&rsquo;ve never experienced a Fulldome video, in which the entire dome ceiling of a sizable theater is the screen. Playing recently was a video called &ldquo;We Are Astronomers.&rdquo; The short movie explores how humans&rsquo; interactions and understanding of the stars have evolved over the centuries, and it did so with mega-sized graphics. Entry to the theater is included with admission.

In all, there are about a dozen attractions at the center, and each attraction has multiple areas of interest. It would be easy to spend two or three hours enjoying the many facets of the cosmos.

At 42 meters tall, the Rocket Tower houses two huge rockets: a U.S.-made Thor Able rocket and one of only 15 British-designed Blue Streak rockets ever built. Each of three levels of the tower give a different view of the rockets and together the levels house an Apollo 11 Lunar Lander simulator, a moon rock brought back by the Apollo 17 mission and a mockup of the Vostok capsule used by the first man in space, cosmonaut Yuri Gagarin, of Russia.

In &ldquo;The Plantes&rdquo; section, you can learn interesting facts about the bodies of the solar system and why Pluto&rsquo;s status was demoted from planet to part of the Kuiper Belt.

One fact I found particularly interesting was the Russians&rsquo; Venera program, which successfully landed probes on Venus&rsquo; surface. Although the first successful probe succumbed to Venus&rsquo; scorching 887-degree temperature and atmospheric pressure 90-times greater than Earth, Venera 7 proved to be the first probe to send radio signal transmissions from the surface of another planet in 1970.

Other areas of interest include &ldquo;Exploring the Universe,&rdquo; &ldquo;Orbiting Earth and Into Space,&rdquo; which is home to an extra-vehicular space suit, a full-size re-creation of the Columbus module laboratory from the International Space Station, a space toilet and loads of interactive activities designed to model life in space.

One such activity simulates one of the forces astronauts must face. After leaning over and sticking your head into a concave space, a disk of brightly-colored polka dots spins, and after a few seconds, a feeling of vertigo makes the stomach queasy and the knees a little weak.

Another unique attraction is a Russian-built Soyuz capsule from the 1970s. Soyuz are the longest-serving manned spacecraft in history, according to the piece&rsquo;s placard.

The National Space Centre has something for people of all ages and can be a fun and informative way to explore space without ever leaving the ground.

From RAF Mildenhall and RAF Lakenheath, take the A11 toward Newmarket where the road joins with the A14. Continue on the A14 past Cambridge, Huntingdon and Kettering until you reach the M1 (north). Stay on the M1 for about 16 minutes until exit 21A toward the A46. Take the A6 toward the city center and go straight through one roundabout. Make a left turn on Corporation Road and an immediate right on Exploration Drive. There are several signs once you reach the A46.