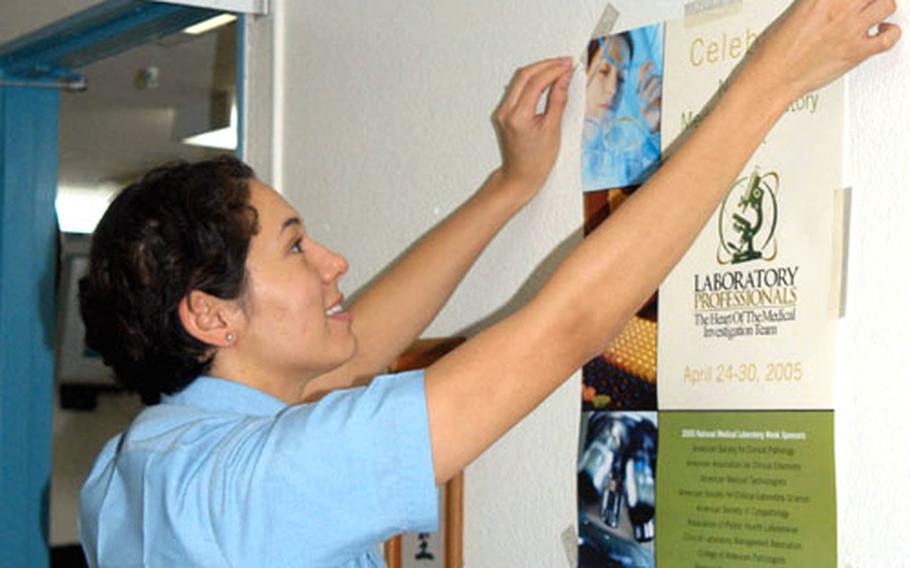 CAMP LESTER, Okinawa &#8212; Visit the U.S. Naval Hospital here next week and you might notice all the new posters going up on hallway walls.

&#8220;Pathologists, laboratory technologists and technicians at the hospital and the Armed Services Blood Bank Center are among the many unsung heroes of medical health care here on Okinawa,&#8221; she said. &#8220;Using state-of-the-art technology and instrumentation, laboratory professionals help to prevent disease by detecting unknown health problems and by aiding in the diagnosis and treatment of existing conditions through accurate, timely test results.&#8221;

She said the laboratory test results make up some 70 percent of patient medical records and are &#8220;vital to the diagnosis and treatment of illness and disease.&#8221;

&#8220;We are proud of the work we do,&#8221; Lt. Cmdr. Tom DeLucia, the hospital&#8217;s laboratory manager, stated in a hospital news release. &#8220;We have to be painstakingly meticulous in performing our jobs to provide dependable answers to our physicians.&#8221;

Early diagnosis also provides a better chance of a cure with treatments less costly than during a disease&#8217;s more advanced stages, Woodhead said.

To celebrate National Medical Laboratory Week, the hospital will promote awareness of the laboratory profession by posting displays related to their work in the hospital lobby, according to hospital officials. Also planned: a cake-cutting ceremony and potluck luncheon for the hospital&#8217;s laboratory workers.