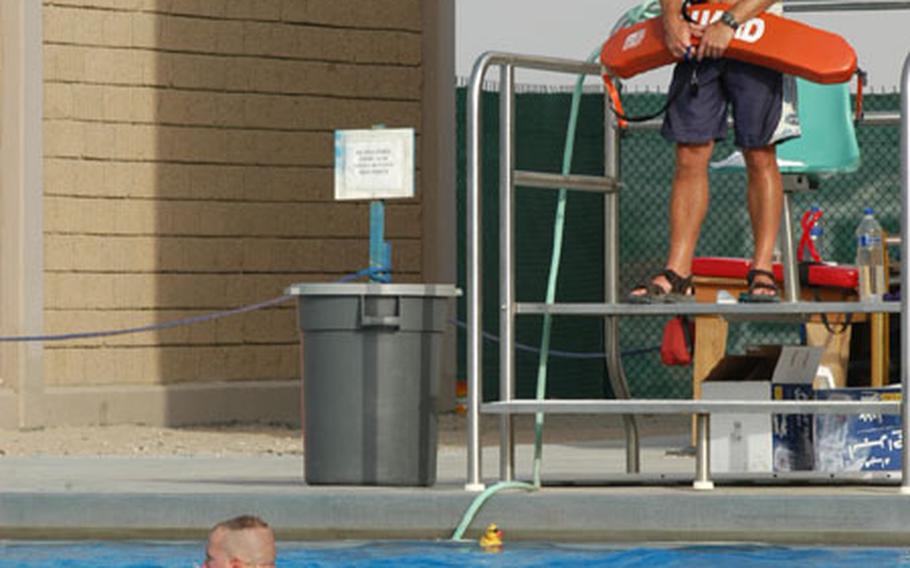 Chief Warrant Officer 2 Al Chapman, a Black Hawk pilot deployed in Kuwait, takes a break from Army life by volunteering as a lifeguard at the pool at Camp Arifjan, Kuwait, on the weekends. (Jessica Inigo / S&S)

Chief Warrant Officer 2 Al Chapman, a Black Hawk pilot deployed in Kuwait, takes a break from Army life by volunteering as a lifeguard at the pool at Camp Arifjan, Kuwait, on the weekends. (Jessica Inigo / S&S) In Kuwait, though, it&#8217;s not too scary for Chief Warrant Officer 2 Al Chapman. In fact, he says he has no worries.

Chapman is more than just a little qualified. He has vivid memories of learning how to swim as a toddler, competitively swimming throughout his school years, and having experience as a lifeguard at lakes, beaches and pools.

&#8220;People don&#8217;t realize the impact this place has on guys and gals who are deployed. The opportunity to have something like this is a godsend. It&#8217;s a break from the Army,&#8221; said Chapman who, during the workweek, flies for the command flight crew, which provides aviation support to the Coalition Forces Land Component Command with Company A, 1-171 Aviation Regiment, out of Camp Udari.

Chapman volunteers at the pool two to three times a week, mostly on the weekends, and he tries to make it out a couple more times to do some swimming himself.

Chapman has spent as much time in the water as he has out of it. He first learned to swim as a toddler, in a &#8220;sink or swim&#8221; method with his mother in a class. Around age 5 or 6, he began doing laps and learning different strokes. Next, he started swimming competitively, becoming his high school team captain. He swam the men&#8217;s 50- and 100-freestyle, winning state championships for four years and finishing in his state&#8217;s top 10.

By 16 years old, Chapman was a certified lifeguard and worked every summer at lakes and pools. As an adult, Chapman volunteered to be a lifeguard for his unit in Hawaii.

Though he has never had a major rescue, he said he did once help a child that simply became too tired to swim any longer.

Chapman said being around the water offers him an escape from the realities of working in support of Operation Iraqi Freedom. The deployment took him away from his civilian job as an airline pilot for Delta&#8217;s Atlantic Southeast Airline.

As a National Guard soldier from Georgia, Chapman said he doesn&#8217;t get as many military flight hours as some of his comrades. He&#8217;s clocking in just over 2,000 hours of flight time, which he says isn&#8217;t much.

&#8220;Surfing is a lifestyle. It gives me this connected feeling with the ocean, a peaceful feeling,&#8221; Chapman said.

Though he can&#8217;t hit the waves in Kuwait, keeping watch over troops at the pool offers Chapman as much peace as a pilot can get while deployed.