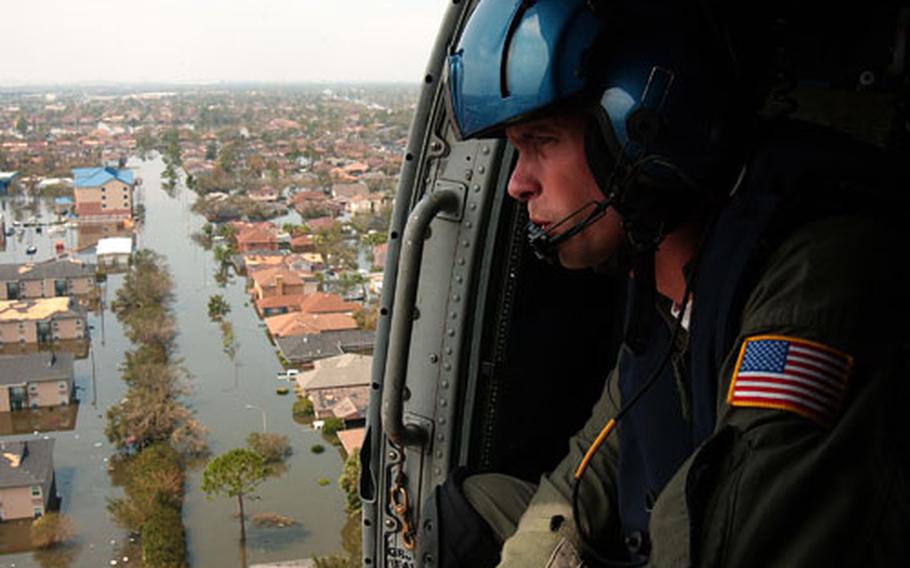 Petty Officer 2nd Class Shawn Beaty, 29, of Long Island, N.Y., looks for survivors Tuesday in the wake of Hurricane Katrina from the door of a rescue helicopter over New Orleans. (U.S. Coast Guard)

ARLINGTON, Va. &#8212; The National Guard will double the number of troops in Mississippi and Louisiana by Friday afternoon, adding 10,000 additional personnel from 13 states to the 11,000 Guard members who are already responding, according to Lt. Gen. Steven Blum, commander of the National Guard Bureau.

About 5,000 of the additional Guard will head to Louisiana, and the other half, to Mississippi, Blum told Pentagon reporters Wednesday afternoon.

The mobilization, which for now remains under control of state governors, is probably the largest single deployment of National Guard troops in response to a national disaster, Blum said.

All of the Guard troops will come prepared to sustain themselves with water, fuel, food and medical supplies for 10 days, Blum said.

In addition to the Guard members already tapped, units are on standby in every state except Hawaii and the U.S. territory of Guam, &#8220;prepared if necessary&#8221; to step in and help, Blum said.

In addition, there are about 7,200 active-duty troops involved in the effort, most of whom are Navy personnel &#8212; a number that is also likely to grow, according to Air Force Brig. Gen. Terry Scherling, the Joint Staff&#8217;s deputy director of anti-terrorism and homeland defense.

The mobilization in response to Katrina is not straining the Guard, despite its heavy involvement in Iraq, Blum said.

Shelby happens to be the same place where the Defense Department&#8217;s U.S. Northern Command at Peterson Air Force Base, Colo., chose to set up its Task Force Katrina to oversee the military aspect of the response.

&#8220;We can clearly handle this situation, and continue to handle our responsibilities overseas,&#8221; Blum said.

Ready to pitch in