National Guard: Jacks of all trades in Iraq 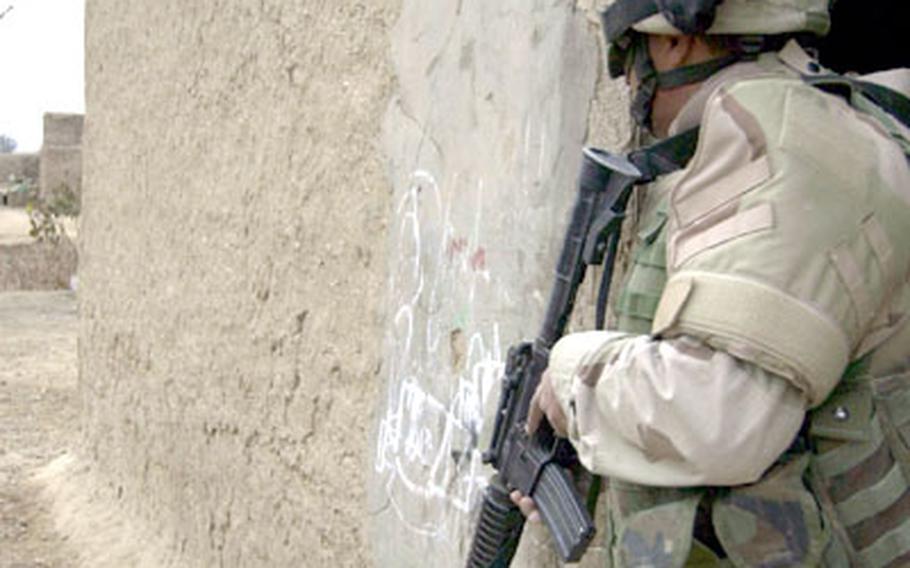 Sgt. Javish Rosa, 25, of New York City, clears buildings at a farm compound outside of Taji. The 1st Battalion, 69th Infantry soldier was formerly on active duty and served a tour in Afghanistan with the 10th Mountain Division. (Joseph Giordono / S&S)

Sgt. Javish Rosa, 25, of New York City, clears buildings at a farm compound outside of Taji. The 1st Battalion, 69th Infantry soldier was formerly on active duty and served a tour in Afghanistan with the 10th Mountain Division. (Joseph Giordono / S&S) Cpl. Luis Villegas, 23, of Manhattan, New York, patrols a palm grove outside of Taji, Iraq, on Christmas Eve. Now a National Guard infantryman with the 1st Battalion, 69th Infantry, Villegas was a college student before being activated with the unit. (Joseph Giordono / S&S) 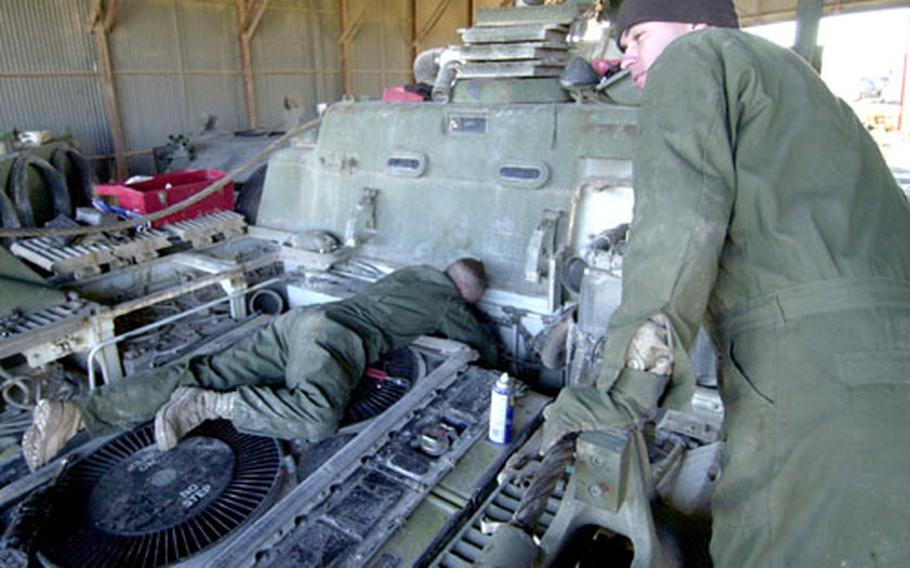 Spc. Paul Dower, right, and Spc. Gary Trabuscio, from Headquarters and Headquarters Company, 1st Battalion, 69th Infantry, work on an M88 recovery vehicle dubbed “The Deacon” in Taji, Iraq. Neither Dower or Trabuscio are mechanics in the civilian world, but both have that military specialty in the National Guard. (Joseph Giordono / S&S) In the National Guard, the 24-year-old is a vehicle mechanic assigned to Headquarters and Headquarters Company, 1st Battalion, 69th Infantry. At home in Staten Island, Trabuscio is a cop with the New York Police Department&#8217;s school safety division.

What do those jobs have in common?

As the third wave of U.S. troops arrives in Iraq, their numbers include more National Guard and Reserve units than ever. And for the citizen-soldiers, their civilian jobs may have something, or nothing, to do with their military specialty.

National Guard units have always been activated for a variety of tasks. Since 1969, for example, the 1st of the 69th from New York City has been called up for a postal strike, a state prison guard strike, in the aftermath of the Sept. 11, 2001, attacks, and now for service in Iraq.

The 256th Brigade Combat Team, a National Guard unit from Louisiana, was activated during the last war with Iraq but did not deploy. This time, they were activated, sent to Fort Hood, Texas, and the National Training Center in California, and now operate in an area north and west of Baghdad, falling under command of the 1st Cavalry Division.

National Guard units currently make up nearly 40 percent of the 150,000 U.S. troops in and around Iraq, officials say. An additional 8,000 are in Afghanistan, according to the head of the National Guard Bureau.

There have been 100,000 Guard soldiers activated in the United States or overseas at any given time since the Sept. 11, 2001, terror attacks, officials said. On Wednesday, the Pentagon said the total number of Army National Guard and Army Reserve on active duty is 159,972.

Back home on Long Island, Lt. Col. Geoff Slack runs a third-generation tree-trimming business, as he calls it. More technically, he jokes, he can be called an arborist.

In Iraq, he commands the 1st of the 69th, and goes into the field so often that he has two personal security teams which work on shifts. Slack has quickly gained a reputation among his soldiers as a driven man who expects a lot from his men, but who gives the same in return. Some who haven&#8217;t known him for long thought he was a cop or firefighter in his civilian life.

One of the great things about the Guard, Slack says, is how long many of the soldiers in the unit have known one another. He&#8217;s known some of his soldiers and their families for nearly two decades. But that closeness can have a downside.

The Fighting 69th, a nickname the battalion earned in the Civil War, has suffered three deaths since arriving in Iraq. Another six soldiers have been wounded so badly they will not return to service.

Sgt. Brad Domingue, a 26-year-old from Carencro, La., serves as a medic with the 2nd Battalion, 156th Infantry Regiment. For the past six years, he has worked as an emergency medical technician on an ambulance crew.

His military job dovetails perfectly with his civilian occupation, sometimes in surprising ways. A few weeks back, during a raid on a compound near Baghdad, Domingue was working with troops keeping security around the target.

As U.S. troops tried to overcome language barriers and allow some local traffic to pass through the area, Domingue&#8217;s medical training came into play. He checked the medication and heart-monitor readout of one man in the car, determining that he had a serious medical condition and was on the way to the hospital. The car was allowed through; its occupants profusely thanked the soldiers.

When he gets back home from Iraq, Domingue said, he&#8217;s thinking of starting his own private ambulance company with one of his former co-workers.

Maj. Lee Wright, 41, of Crowley, La., serves as the 256th Brigade&#8217;s information operations officer. As he describes it, his job is to synchronize and coordinate the messages of the psychological operations, public affairs and civil affairs teams.

In his civilian life, Wright is a food chemist for a company that produces additive blends for sports nutrition products and other consumables. His job has come into play in Iraq in a few surprising ways.

Within the 256th&#8217;s area of operations, he said, is a pharmaceutical plant the locals are trying to get working again. Back home, Wright was doing research-and-development work with the type of equipment being used at the plant in Iraq. His experience also helps in the largely agricultural area where the brigade is operating.

&#8220;In our business back home, we have extensive interactions with the rice, wheat and corn industries, from the basic level through processing,&#8221; Wright said. &#8220;This being a predominantly agricultural area, I&#8217;ve already started using those contacts to help with that.&#8221;