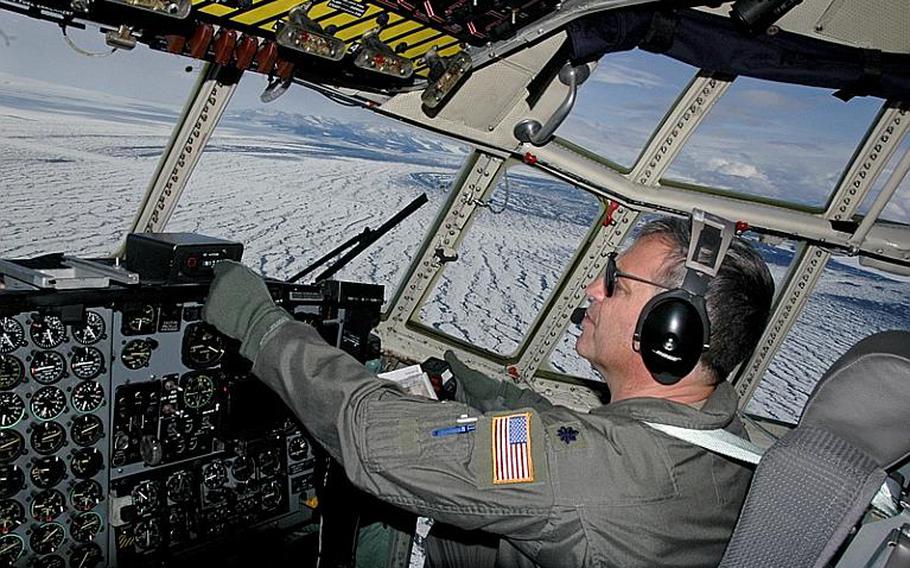 The LC-130 Hercules, piloted by Lt. Col. Joseph Hathaway, soared above the ice before reaching the Scott Coast. Soon the Prince Albert Mountains loomed on the horizon and the smoldering Mount Erebus volcano appeared off the port wing.

The aircraft fly south to isolated bases and camps all over Antarctica to support National Science Foundation research on everything from global warming to astronomy, geology and space exploration.

A major review of the U.S. Antarctic Program, which could result in greater use of alternative energy and remote vehicles on the ice, is under way. A panel of government, business, academic and military leaders such as retired Coast Guard commandant Adm. Thad Allen and the chief of the U.S. Transportation Command, Gen. Duncan McNabb, will make recommendations on the future of U.S. Antarctic research in the fall.

The place where most U.S. personnel touch down in Antarctica is McMurdo Station, the largest of three bases that the U.S. has built to facilitate scientific research and maintain a military presence on the icy continent.

That was where Hathaway&rsquo;s Hercules was headed on its mid-January flight south. As the aircraft began its descent over McMurdo Sound, it entered a cloud bank. Inside the clouds, the only color Hathaway could see through his cockpit window was white.

&ldquo;It&rsquo;s like flying inside a pingpong ball,&rdquo; he said.

There are no airports to divert to and, once fuel in an aircraft&rsquo;s tanks reaches a critical level, there&rsquo;s no turning back to Christchurch, 2,000 miles away. If the Hercules went down over water, the crew could potentially float for eight hours in survival suits before exposure set in, but help would likely take longer to arrive, according to Master Sgt. Kerri Booth, 41, of Ballston Spa, N.Y.

&ldquo;We think about it (ditching in the sea) all the time,&rdquo; said the LC-130 loadmaster who, despite the danger, has been flying Antarctic missions for more than a decade.

Getting over the Southern Ocean is the easy part. In parts of the continent, where flat snow-covered terrain runs for hundreds of miles, the horizon can be indistinguishable from the sky.

&ldquo;You get those conditions when there is high cloud and the sun can&rsquo;t really penetrate to give you any shadow and there&rsquo;s limited visibility,&rdquo; Hathaway said, adding that wind-blown snow can add to the problem.

Mount Erebus is a constant reminder to the guardsmen of the dangers of flying in a whiteout. The volcano is an icy tomb for 237 sightseers and 20 aircrew members who died when an Air New Zealand jumbo jet slammed into the mountain in poor visibility in 1979.

The hulks of other downed aircraft are scattered throughout Antarctica &mdash; a wrecked Hercules lies buried in snow at the South Pole, and the bodies of three Navy aviators have never been recovered from a PBM Mariner flying boat that went down in a December 1946 blizzard during the U.S. military&rsquo;s first effort to establish an Antarctic research program &mdash; Operation Highjump.

But U.S. fliers have never backed down from the challenge of Antarctica. A statue of U.S. Rear Adm. Richard E. Byrd &mdash; the first man to fly over the South Pole &mdash; stands in front of the National Science Foundation&rsquo;s McMurdo headquarters reminding today&rsquo;s aviators of their heritage.

Hathaway banked left over an iced-in McMurdo Sound. Soon the U.S. base came into view, a multicolored collection of steel sheds sandwiched between the ice and the black volcanic slopes of Ross Island.

In Antarctica, only the heavy C-17 lands on wheels and the only place it lands is Pegasus Field, a groomed and marked section of permanent ice shelf across the bay from McMurdo Station. The LC-130s have skis attached to the bottom if their hulls, allowing them to land like a ski jumper, and enabling them to put down on flat snow anywhere in Antarctica.

But make no mistake, landing on snow and ice isn&rsquo;t easy.

Pegasus Field is named for another wrecked aircraft &mdash; a C-121 Lockheed Constellation called Pegasus that crashed nearby in October 1970. The plane&rsquo;s red twin tail fins still poke out of the snow where it lies, half buried in the ice shelf.

Hathaway looped his Hercules around Ross Island and dropped its landing skis.

&ldquo;If (the visibility is bad and) we can&rsquo;t make it in here, there is a field called, &lsquo;the whiteout landing area,&rsquo; where we will just set it down blind,&rdquo; he said, added reassuringly, &ldquo;It&rsquo;s been surveyed to make sure there are no crevasses.&rdquo;

The 109th Airlift Wing&rsquo;s 10 LC-130s spend most of their time moving personnel, supplies and equipment between Pegasus and a dozen or more camps scattered throughout the continent.

Landing is close to impossible during the night, and since the continent is blanketed in darkness for six months out of the year, personnel and cargo must be moved between October and February, when there&rsquo;s 24-hour daylight and temperatures are warm enough to operate, according to the unit&rsquo;s commander, Col. Tim LaBarge, 50, of Tupper Lake, N.Y.

In an average season, the airlift wing flies about 400 missions and moves 12 million pounds of cargo.

Planning missions in Antarctica can be complicated, according to Maj. Norman Carlyle, 41, of Saratoga Springs, N.Y. A United Airlines pilot in the civilian world, Carlyle said LC-130 mission planners must take into account things like rough ski landing areas at some camps resulting in aircraft carrying less weight. Other camps are so far from the main bases that the LC-130s must stop to refuel and supply dumps en route, he said.

Riding inside Hathaway&rsquo;s LC-130 as it touched down at Pegasus Field felt like being strapped to the world&rsquo;s biggest snowboard as it hurdled across the snow. A brief blast of reverse thrust quickly slowed down the aircraft and it slid to a halt as ground crews arrived to prepare it for the next mission.

Flying in Antarctica is challenging and the weather can be unforgiving but, when a mission succeeds in difficult conditions, it can be satisfying for aircrews, LaBarge said.

&ldquo;On one mission to the South Pole, we made about four passes trying to get in,&rdquo; he said.

&ldquo;We just couldn&rsquo;t find a way through but then we came from the opposite direction, found a hole in the clouds and picked up our people and dropped off our stuff.

&ldquo;Those challenging weather days like that can make you feel good as an aviator when you complete a mission.&rdquo;

Air National Guard mechanics&rsquo; jobs in Antarctica are no less extreme than those of aircrews.

There are no hangars big enough for an LC-130 in Antarctica, so all the work is done outdoors.

At Pegasus Field, temperatures can drop to minus 30, so mechanics wear black knee-high winter boots to stave off frostbite.

Tech. Sgt. Michael Gorman, 38, of Latham, N.Y., said conditions aren&rsquo;t as bad in mid-summer, but he added: &ldquo;Once the sun starts to drop behind the glaciers, then it will start showing its true colors again.&rdquo;

The weight of skis means the LC-130s have strengthened nose sections and bigger hydraulic systems than standard C-130s. It&rsquo;s common for the hydraulic systems to spring leaks in the freezing conditions. Tech Sgt. Carlos Bonilla-Diaz, 53, of Fonda, N.Y., said that in minutes, conditions on the ice shelf can go from sunny to not being able to see 2 feet.

Mechanics wear gloves to protect their hands as much as possible and cover their faces in ice fog or wind but some still get frostbite, he said.

&ldquo;If you need to do something with your fingers it&rsquo;s going to take a lot longer,&rdquo; he said.

&ldquo;You can turn on the heaters but then you are sacrificing the engine (which functions better if it is kept warm) for yourself.&rdquo;