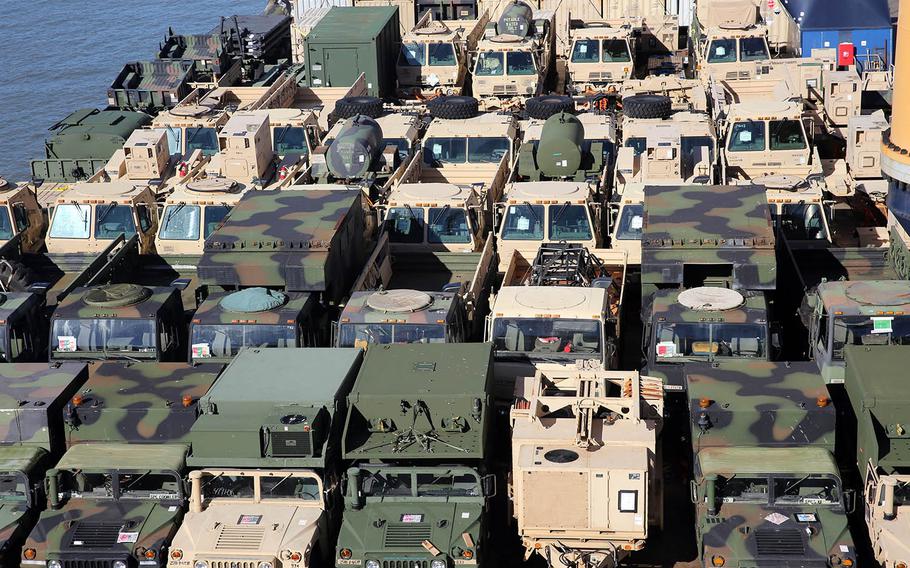 Dozens of military vehicles sit last spring on the top deck of heavy-lift vessel Ocean Jazz, which were used in the Talisman Sabre exercise in Australia as part of the Army's Pacific Pathways. (Grady Fontana/U.S. Navy photo)

FORT SHAFTER, Hawaii — The Indiana National Guard will provide the lead brigade for the second leg of this year’s Pacific Pathways exercises, marking the first time the Guard has assumed that role in the five years since the initiative began.

“We’re excited because it’s a new thing for Pacific Pathways to have a National Guard brigade as the lead of the Pathways element,” he said.

Pacific Pathways was launched in 2014 as the brainchild of former USARPAC head Gen. Vincent Brooks. It strings together a series of already-established joint exercises with allies and partner nations throughout the Pacific.

Instead of deploying troops and equipment for a single exercise and then returning to a home station, Pathways creates expeditionary-style deployments of two to three months for soldiers and equipment.

Among its goals is sustaining a greater Army presence throughout the Pacific.

The lead brigade has usually come from Hawaii or Alaska.

Pathways is generally structured in three separate sets of deployments each year.

The first iteration this year kicks off early next month with Cobra Gold in Thailand, led by the Hawaii-based 2nd Brigade Combat Team, 25th Infantry Division. The soldiers then head to South Korea for training, followed by the Balikatan exercise in the Philippines, Garver said.

In the second iteration — roughly July to September — troops from the 76th will first head to Australia for the large Army exercise Hamel. Guardsmen will also participate in Keris Strike in Malaysia, Garuda Shield in Indonesia, Hanuman Guardian in Thailand, Ulchi Freedom Guardian in South Korea and Orient Shield in Japan, Garver said. Some will participate in jungle training in Brunei, he said.

Planning the participation of so many Guardsmen in a leg of Pathways, which typically lasts three months, has been complex because participants will do so as part of their annual Guard training.

“You get maybe up to 21 days, depending upon how the orders are written, to participate in annual training,” Garver said.

One of the ongoing goals of Pathways, however, is to sharpen the Army’s logistical skills in moving people and equipment into and around the theater.

The multiple exercises test the Army’s “ability to sustain your forces forward — not living on a forward operating base that contractors run for you — and the ability to keep moving along your Pathways route and participate in different tactical missions,” Garver said.

The involvement of the 76th in Pathways was largely happenstance.

Since the 76th had been scheduled years earlier to receive that regional training in the Pacific in 2018, senior leaders assigned the combat brigade to lead the second leg of Pathways this year, he said.

The lead for the third Pathways leg will be the 3rd Brigade Combat Team, 25th Infantry Division.

The soldiers will participate in Tiger Balm and Rim of the Pacific exercises, both in Hawaii; Valiant Shield in the Pacific Ocean; and Rising Thunder in Japan.