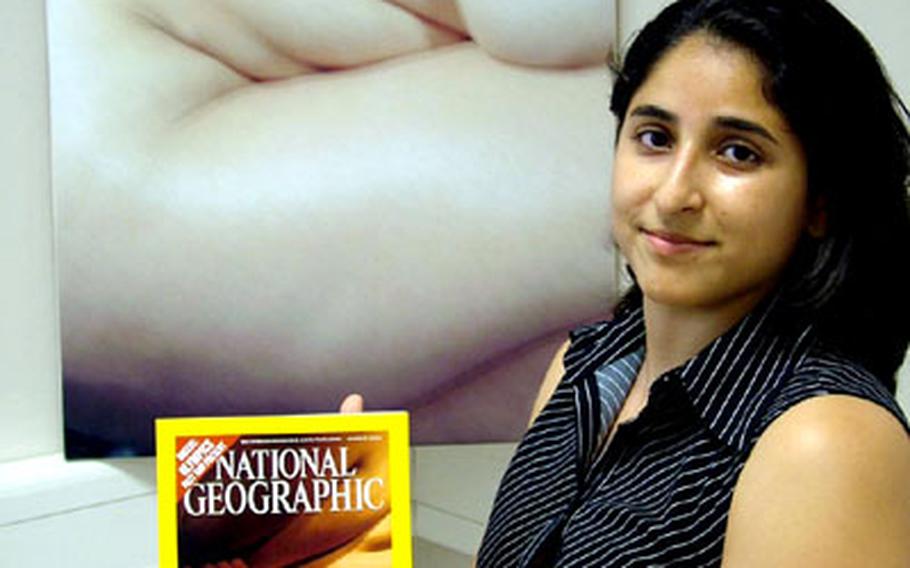 Leslie Cervantes, wife of Army Sgt. Jose Cervantes of the 52nd Signal Battalion in Stuttgart, Germany, was shocked to see the August cover of National Geographic, which nearly replicates a photo she took four years ago that has been shown at art shows in the United States and Germany. (Charlie Coon / S&S)

STUTTGART, Germany &#8212; A naked woman sat down and leaned forward, and the folds of her body stacked up like flab. She took a picture of herself.

Leslie Cervantes thought it was a fresh way to portray a woman&#8217;s body. She showed the photos in art exhibits. Then earlier this month, while browsing a magazine rack, Cervantes saw one of her skin-fold photos on the cover of National Geographic.

Kasmauski, who has been photographing for National Geographic for 20 years, said the two images were just a coincidence.

&#8220;Neither my editor nor myself have ever seen an image like the one on the cover, nor have we ever heard of the young photographer you mentioned or seen any images by her,&#8221; Kasmauski said in an e-mailed response to Stars and Stripes. &#8220;Unfortunately, photos can be similar by sheer coincidence. I have often seen photos that I could have sworn were mine, but weren&#8217;t.&#8221;

The National Geographic editor who designed the cover, Susan Welchman, said she wanted a photo of someone who was nude and fat. Welchman said she went through about 10 rolls of Kasmauski&#8217;s film before settling on the image used for the cover.

The James F. Byrnes Institute in Stuttgart, which displays American art for German patrons, showed Cervantes&#8217; work in March. Cristina Merenyi, who has been working at the institute for four years, said it took time for her to recognize Cervantes&#8217; photos as a human body.

Cervantes took the photos of herself in 2000. Actually, her then 1-year-old daughter, Natalia, took the photos, pressing the shutter on a camera that was perched atop a rickety tripod, causing the photos to blur.

She said she has displayed them four times in the States and once in Stuttgart, as well as on her Web site.

Jose Cervantes joined the Army in 2001, two years after graduating from the University of Notre Dame. Jose and Leslie, who were high-school sweethearts in Alvin, Texas, moved to Stuttgart in 2003.

Jose was a little antsy about his wife&#8217;s nude body being put on photographic display, but said he supported her desire to portray women in a more natural way.

Young women face enough pressures growing up, Leslie Cervantes said. Keeping up with billboard and magazine models shouldn&#8217;t be one of them.