Gary Kramer, left, and Les McGehee, right, grill Dorian Lenz in a crime skit during the National Comedy Theatres performance in Darmstadt, Germany, Tuesday night. Lenz had to guess by the questions what crime he and Chris O&#39;Neill, not pictured, were accused of. (Michael Abrams / S&S)

Gary Kramer, left, and Les McGehee, right, grill Dorian Lenz in a crime skit during the National Comedy Theatres performance in Darmstadt, Germany, Tuesday night. Lenz had to guess by the questions what crime he and Chris O&#39;Neill, not pictured, were accused of. (Michael Abrams / S&S) 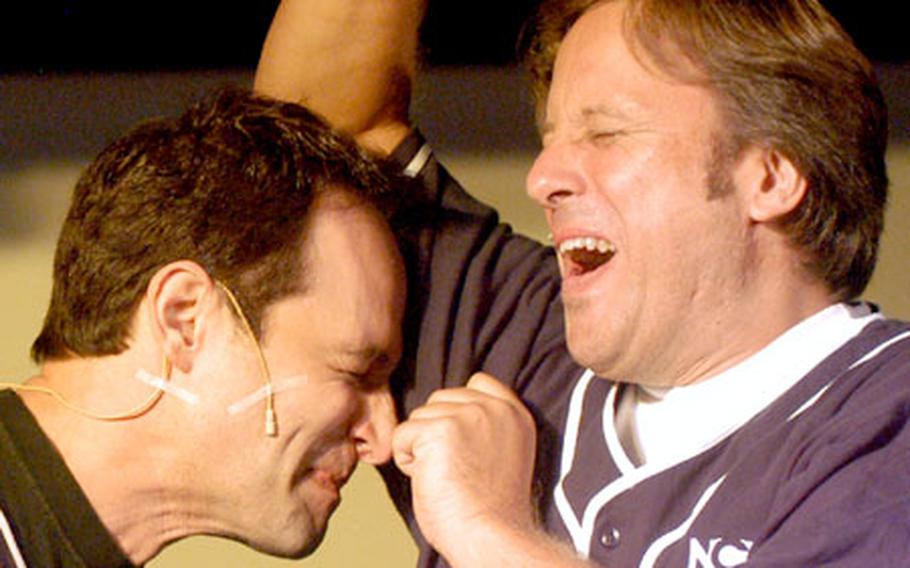 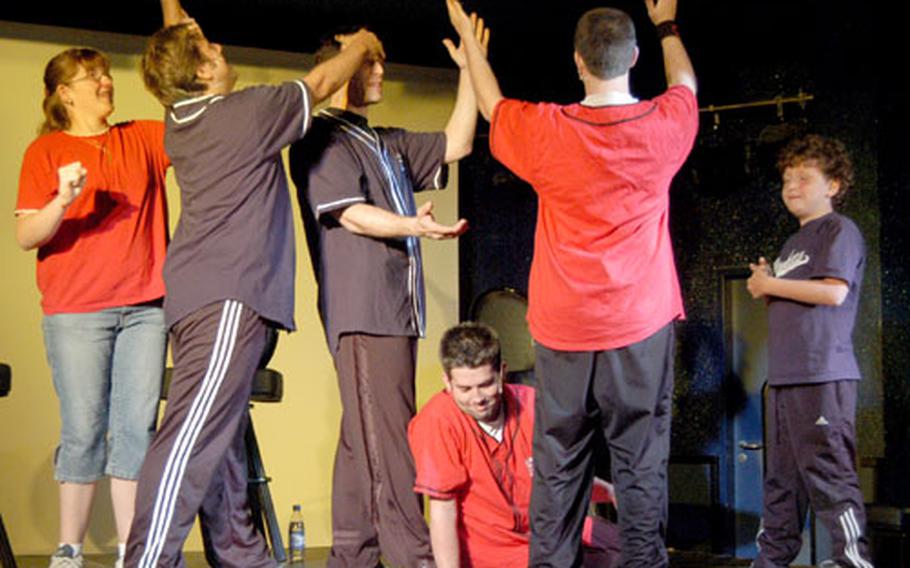 DARMSTADT, Germany &#8212; Throughout August, a five-person improv act will be bringing clean comedy to stages on installations throughout Europe while still making audiences think a little dirty.

The PG-13 performance put on by the National Comedy Theatre, based in San Diego, puts on a clever show with maximum audience participation. In its third year touring with Armed Forces Entertainment, the troupe showed off their military knowledge by asking for people by rank and poking fun at intelligence levels.

During the first show of this year&#8217;s tour, at the Escape Club in Darmstadt, the cast explained that they would be doing eight acts where the audience offers suggestions and then the actors play out their scenes.

He said this foul could be called at anytime during a skit on either the actors or an audience member for saying or doing something vulgar, dirty or otherwise offensive. That person would then have to wear a brown bag on their head for the rest of the performance.

No one at the Darmstadt show got bagged, but one audience member got close when someone dropped an &#8220;S-bomb&#8221; while offering up a skit for the four actors to play-out.

In the skit, Kevin Tryon, who is from Darmstadt but is currently stationed in Djibouti, Africa, and home on a two-week R&R break, described a recent dramatic scene in his life.

Tryon said that while he was out with a group of Irishmen in downtown Djibouti, a taxi driver threatened him with death if he didn&#8217;t take a ride in the cab. To escape, Tryon said he bought the driver a hooker.

One audience member aptly named the scene: &#8220;They bribed him with the booty in Djibouti.&#8221;

The troupe first played out the skit in normal dramatic form. Then they did it three more times, but in various audience-suggested styles. They acted it out as a romance, then as a Shakespearian play, and finally ended it as a rap song.

The crowd busted up with laughter.

After the show, Tryon and his two daughters compared it to the &#8220;Whose Line Is It Anyway?&#8221; television improv show.

After the show, the comedians explained that military shows almost make them feel bad.