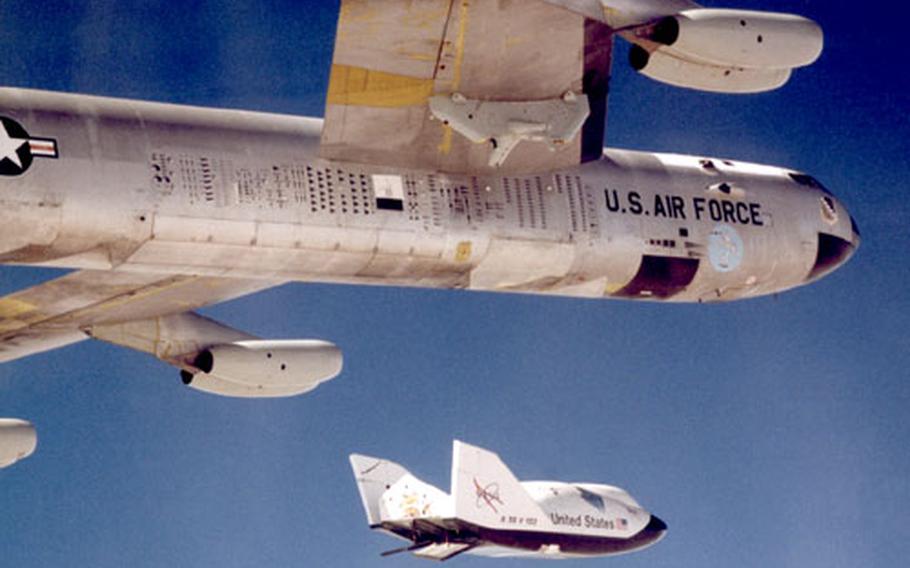 The X-38 research vehicle drops away from NASA’s B-52B mothership after it’s released from the B-52’s wing pylon in July 1999. After nearly 50 years of service with NASA, the B-52 is being retired and will be put on display at Edwards Air Force Base, Calif. The markings under the wing of the B-52B are a history of all the vehicles the plane has launched. (Courtesy of Dryden Flight Research Center)

But Alan Brown, spokesman for NASA&#8217;s Dryden Flight Research Center in California, said mechanics have been salvaging parts from junked bombers and museums for years to keep the B-52B aloft, and the center simply does not have the finances or the need to continue those repairs.

The plane&#8217;s last flight was in November, when it carried the X-43A experimental scramjet engine on that machine&#8217;s 7,000 mph, record-setting flight. Other experiments included the X-15 rocket plane, the precursor to NASA&#8217;s early manned spacecraft.

Built in 1955, the aircraft was the 10th B-52 ever produced, but never dropped a single bomb, Brown said. Air Force officials loaned the plane to NASA in 1959 for space travel research, and will put the machine on permanent display at Edwards Air Force Base, Calif., following Friday&#8217;s handover.

The silver ship has seen more than 20 pilots over the last half-century but has been flown less than 2,500 hours, the least of any of the B-52s, Brown said.

NASA does have a modified B-52H that can conduct some air launch experiments in the future, but Brown said those will be few and far between. The newer aircraft doesn&#8217;t have the strength or other payload modifications of the B-52B, and less expensive computer programs and smaller models will provide most of the data for future scientific research.

What those new devices won&#8217;t have, Brown said, is the impressive history of the B-52B.