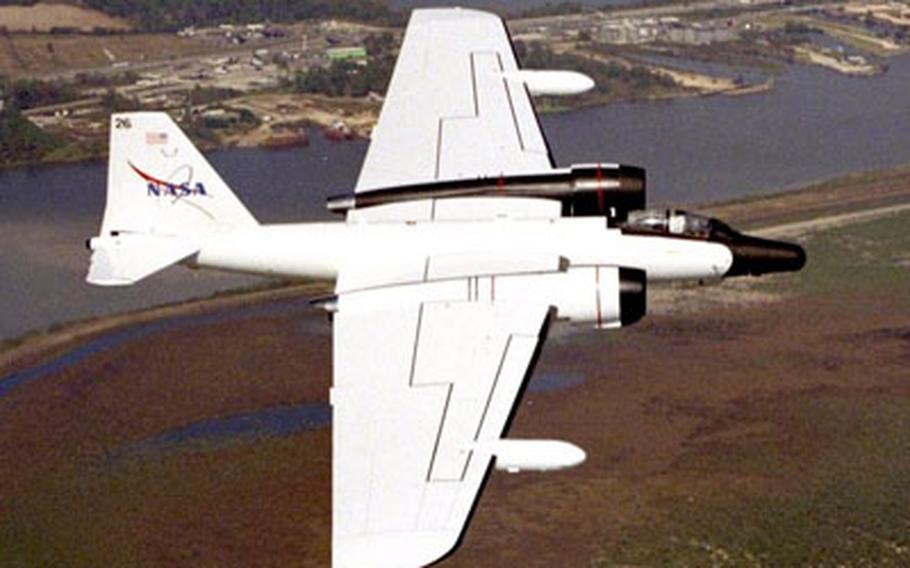 The WB-57 is equipped with a particle-collection system that allows it to essentially vacuum the skies for the microscopic space dust. (NASA photo)

RAF MILDENHALL, England &#8212; After a six-week stint here, a NASA crew was scheduled to head back to Johnson Space Center Sunday with their distinct aircraft, easily spotted on the flight line by its peculiar nose.

"People ask us about the plane all the time," said research pilot Mike Giles, part of a 10-man team of aviators, scientists and mechanics who led the space agency&#8217;s cosmic dust-collecting mission from Mildenhall in the WB-57.

The plane is equipped with a particle-collection system that allows it to essentially vacuum the skies for the microscopic space dust. A variation of the 1950s-era British Canberra bomber, the WB-57 is modified for weather reconnaissance missions and can reach altitudes in excess of 60,000 feet, according to specs on NASA&#8217;s Web site. The agency operates the only two in the world still flying today.

The space dust flights Giles and other NASA pilots fly from locations around the world are pre-determined paths.

"The scientists dictate where we fly. The missions are fairly benign," said Giles, a former Navy aviator.

Since 1981, NASA has been gathering and cataloging cosmic dust &#8212; remnants of asteroids and comets &#8212; that linger in the stratosphere. While NASA does the collecting and processing, the dust is analyzed by scientists and researchers all over the world &#8212; from epidemiologists to climatologists.

The mission first came to Mildenhall in 2005. Launching out of England expands the collection area and allows the plane to reach the stratosphere faster because the country is so far north, according to NASA scientists.

What&#8217;s more, operating from a military base "just gives us so much better support," said mission manager and former pilot Bud Meins.

"By doing it at Mildenhall we don&#8217;t have to bring as much equipment with us as, say, we would when we go somewhere like Costa Rica," he said.

Space dust collection is focused on snatching up extraterrestrial particles, which are so rare that typically only one is collected for each hour the aircraft is in flight. They are the raw material from which the planets and the sun were formed. And cosmic dust exists in its original state, which is why it&#8217;s so valuable to researchers.

Still, much of what is collected during the flights is dust generated by the Earth such as volcanic ash, which is also highly studied.

Most of the science behind the mission won&#8217;t commence until the microscopic particles make it back to Johnson, the Houston-based center best known as the home of the U.S. astronaut corps.