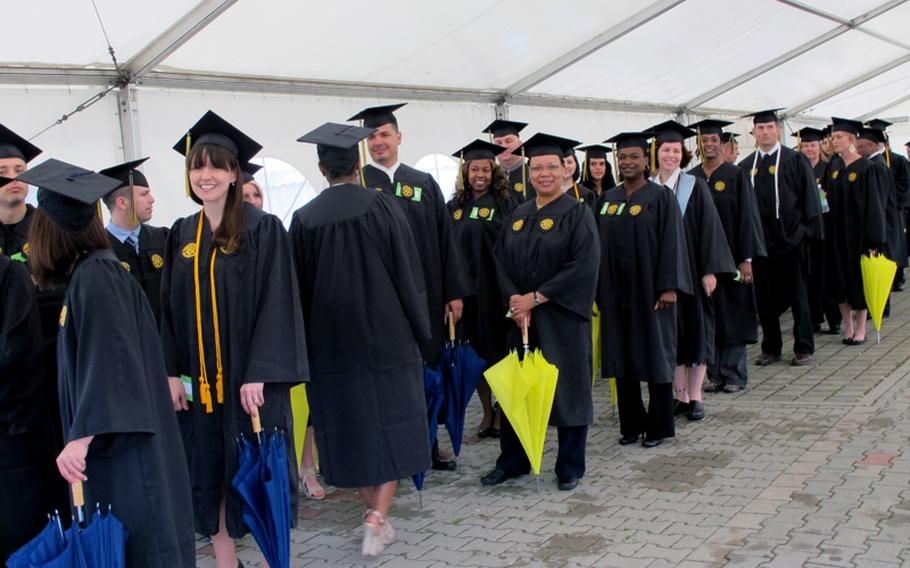 Happy graduates of the University of Maryland University College Europe prepare to march to receive their degrees at the university's 2012 commencement ceremony Saturday at Patrick Henry Village in Heidelberg. (Nancy Montgomery/Stars and Stripes)

Happy graduates of the University of Maryland University College Europe prepare to march to receive their degrees at the university's 2012 commencement ceremony Saturday at Patrick Henry Village in Heidelberg. (Nancy Montgomery/Stars and Stripes) 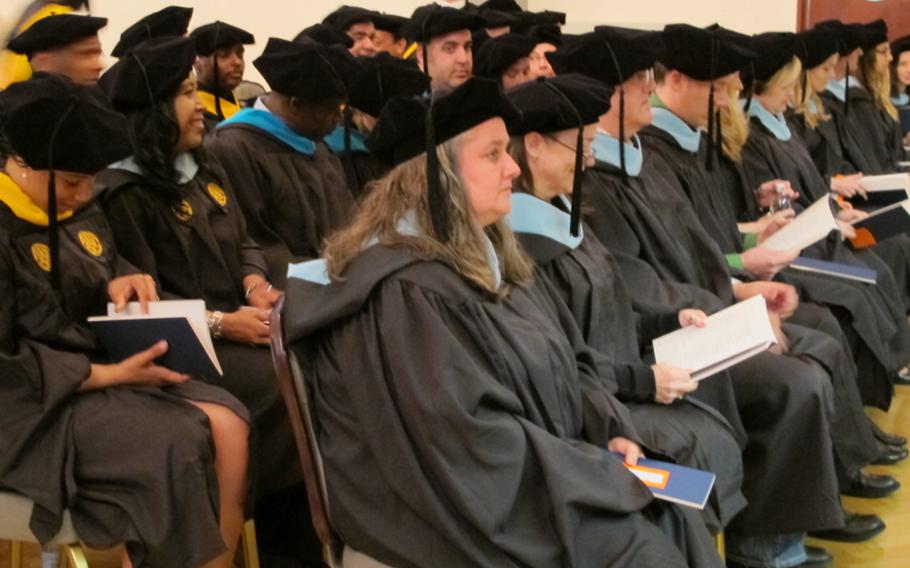 Graduates in the University of Maryland University College Europe class of 2012 await their turn on stage at the Pavilion on Patrick Henry Village to receive their diplomas Saturday at the university's 60th annual commencement in Heidelberg. (Nancy Montgomery/Stars and Stripes) 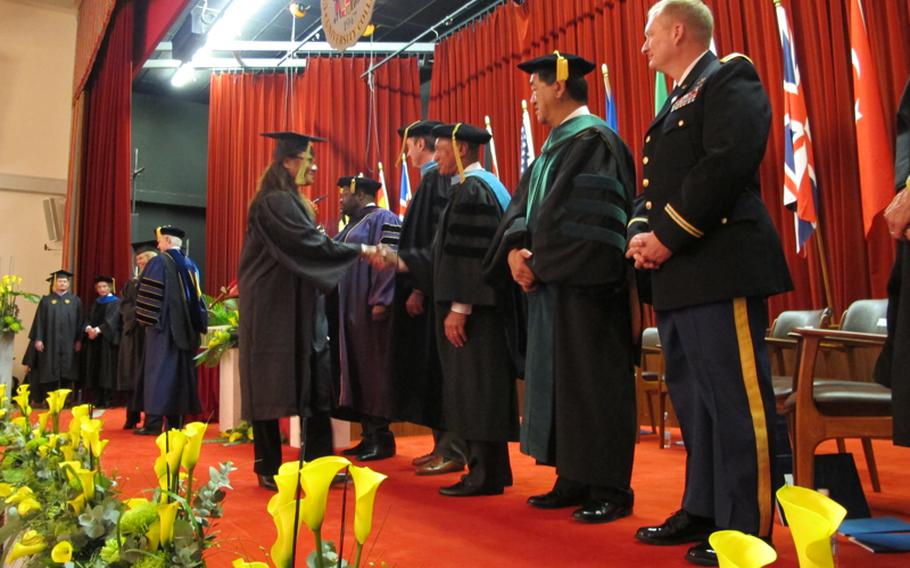 HEIDELBERG, Germany &mdash; More than 250 newly minted graduates were praised, advised and encouraged Saturday at the University of Maryland University College Europe&rsquo;s 60th commencement ceremony by speakers that included the head of NASA and the U.S. ambassador to Germany.

The graduates included those earning associate, bachelor&rsquo;s and master&rsquo;s degrees. There were more than 1,300 students in Europe, Africa and the Middle East, including 154 deployed in Afghanistan, Kuwait and Kosovo, in the class of 2012, according to a UMUC news release.

It was not your average commencement crowd. The average age of the 641 students earning bachelor&rsquo;s degrees was 34. Nearly 80 percent were married and 65 percent had children.

Many were active-duty soldiers who had juggled deployments and studying with their daily work and family duties.

Zieba, wearing his cap and gown at the ceremony on Patrick Henry Village, has been in the Army more than 21 years. The degree will help him when he leaves the Army and becomes a civilian. &ldquo;I hope to get my master&rsquo;s, too,&rdquo; he said.

Ranikki Brown, who worked at Morale, Welfare and Recreation at Ramstein Air Base while pursuing studies in human resource management, also was awarded a bachelor&rsquo;s degree on Saturday &mdash; her 23rd birthday.

It had taken her four years, and despite the fact that she&rsquo;s single, it still was difficult, she said.

Philip D. Murphy, now the U.S. ambassador to Germany after a career at Goldman Sachs, offered his &ldquo;Top 10&rdquo; pieces of advice during his address. Among the tips were: &ldquo;Don&rsquo;t travel in packs&rdquo; and &ldquo;Balance finding the right mentor without being seen to be kissing up to your superiors.&rdquo;

His top tip, though, was not to focus exclusively on career. &ldquo;Your parents aren&rsquo;t going to be around forever. Don&rsquo;t let your health go. Don&rsquo;t blow up your relationships. Keep that balance.&rdquo;

Charles F. Bolden Jr., former astronaut, retired Marine Corps major general and now the administrator of the National Aeronautics and Space Administration, told the graduates that NASA would be looking for astronauts. Among upcoming efforts, he said, would be flights to the International Space Station, followed by a flight to an asteroid by 2025 and to Mars by 2030.

Bolden said that when he was in space, looking down at the Earth, &ldquo;there are no borders, there are no lines, there are no boundaries. It looks like one, big happy place,&rdquo; he said. He told the graduates success meant much more than money or recognition.

&ldquo;It&rsquo;s said that the best way to predict the future is to invent it,&rdquo; Bolden said. &ldquo;This is your mission, and this is your moment.&rdquo;