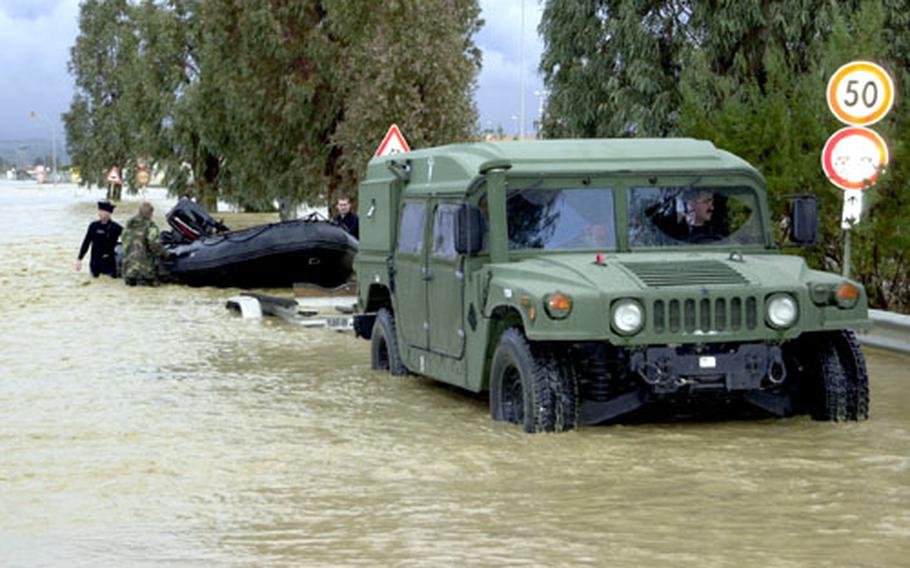 A U.S. Navy base in Sigonella, Sicily, slowly is returning to life following debilitating flooding this week that forced the evacuation of about 475 families from base housing Thursday and shut down major services.

By Friday, the public works department at Naval Air Station Sigonella, Sicily, had restored the “three vital services” of power, water and sewer to the NAS II base, and the Maranai housing complex, officials said.

“Public works is predominately made up of Seabees and local nationals, [and] they have been working diligently to put this community back together,” Capt. Bob Gibbs, the public works officer for NAS Sigonella, said in a statement. 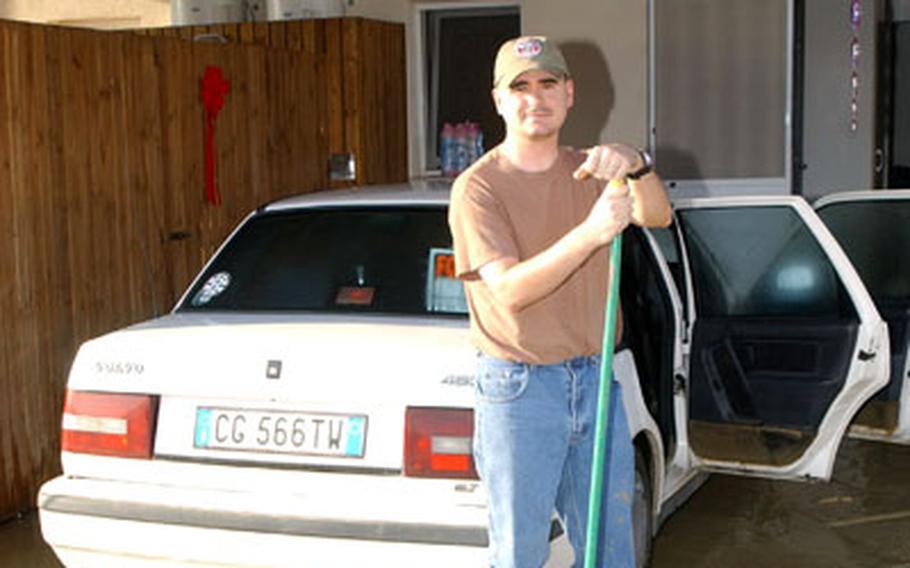 A sailor starts cleaning up the mud outside his residence at the Marinai Housing Area at Naval Air Station Sigonella. (Gunnar Gorder / U.S. Navy) 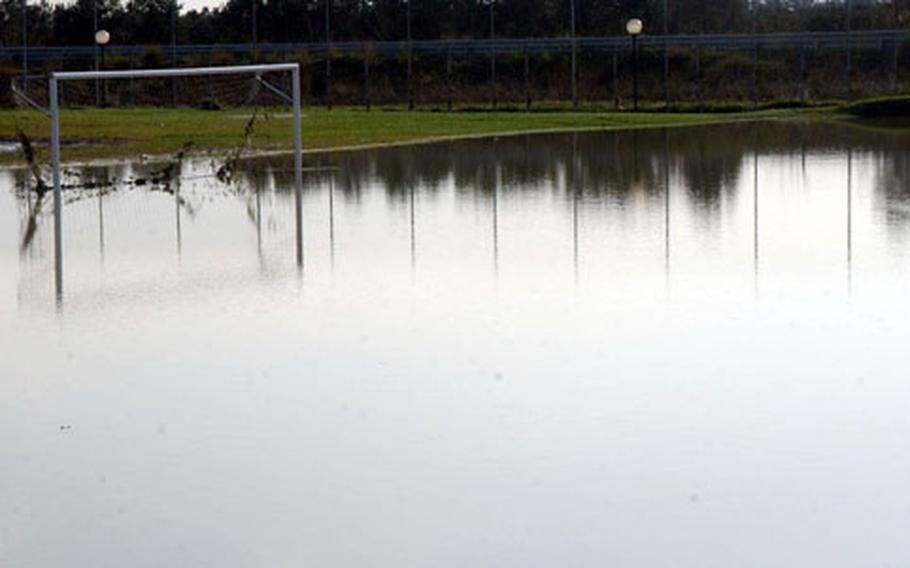 The soccer field at at the Marinai Housing Area at NAS Sigonella lies under several feet of water after three days of torrential rain. (Gunnar Gorder / U.S. Navy) 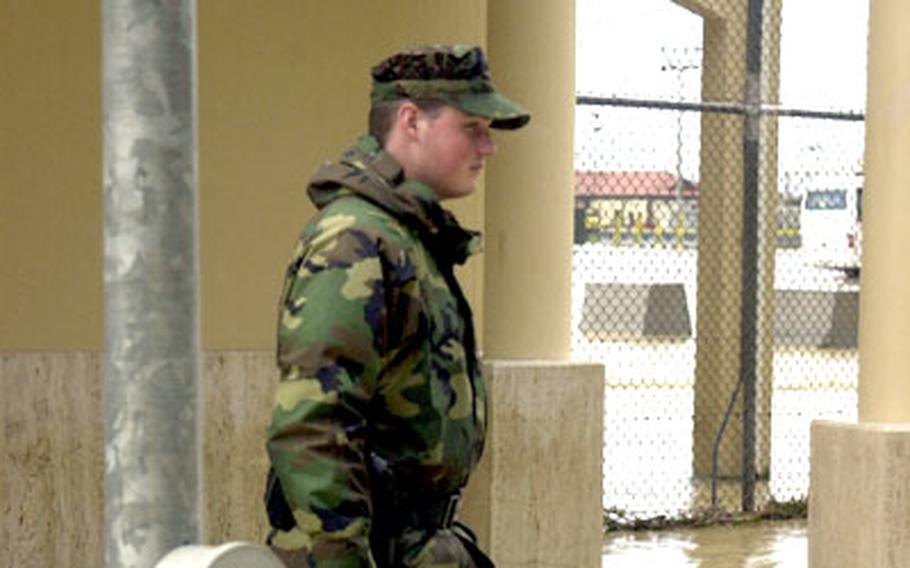 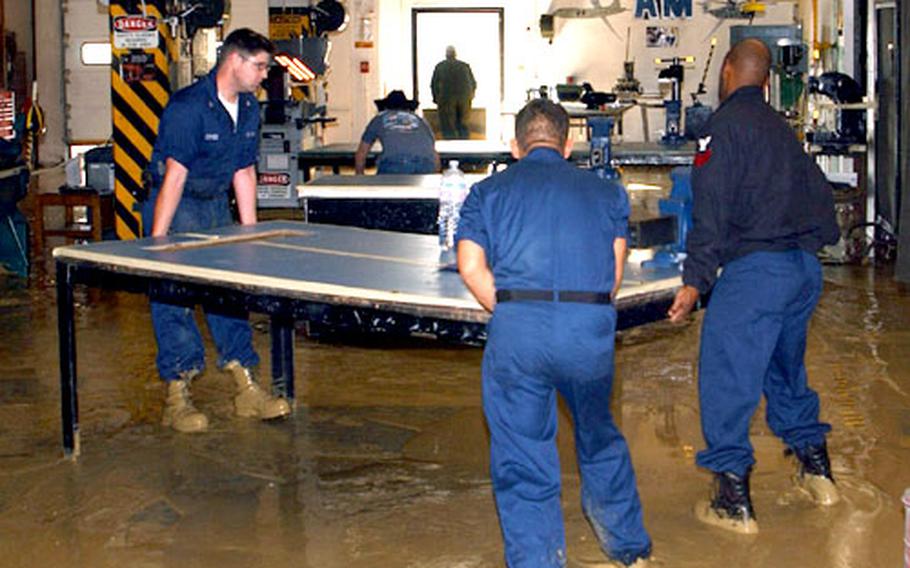 No American injuries have been reported because of the bad weather.

But residents still are not able to return home, and officials have no time line. Water will have to run through purifying systems for at least four days before it is considered potable, and there’s no telling how long it will take to rid the housing complex of the mud that settled in after waters receded, said base commander Capt. Joe Stuyvesant, who declared a state of emergency for NAS II and the Maranai housing complex on Wednesday after nearly weeklong, heavy rainfall.

Adm. Harry Ulrich, commander of U.S. Naval Forces Europe, said he would not hesitate to seek assistance from other services and U.S. and Italian officials, if needed.

“All resources within reason have been directed to assist the emergent needs of our people in Sigonella, and to restore the operational capabilities of NAS Sigonella,” Ulrich said in a statement.

Downpours had stopped by Wednesday, and by Friday most of the water had receded, base spokesman Lt. Jon Groveman said. “But now, there’s just mud everywhere,” he said.

“The patience and understanding exhibited by the Maranai residents during these trying days has been incredible,” Groveman said.

About 100 volunteers from American Red Cross and Navy-Marine Corps Relief Society set up at the central care facility staged at the bowling alley to hand out emergency supplies and food and diaper vouchers for use at the commissary. The Navy Exchange supplied families with free phone cards. Navy legal service officials too had an information-and-claims booth at the center.

Navy officials have cautioned people to travel as little as possible since some roadways still might be dangerous or impassable.