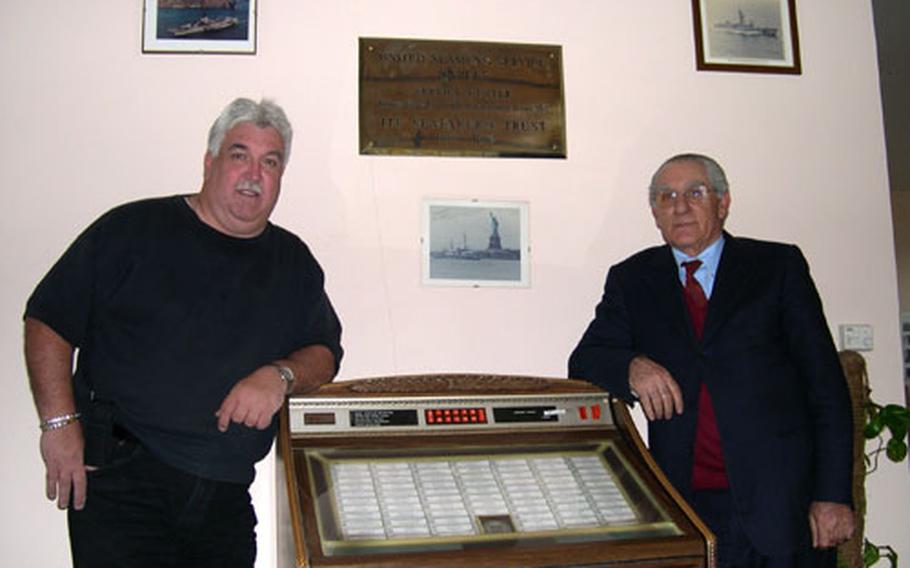 United Seamen&#39;s Service Center director Bill Moerler, left, and long-time employee Daniele D&#39;Ettore lean against the center&#39;s jukebox in Naples, Italy. The jukebox, like D&#39;Ettore, has been serving center patrons for more than 50 years. D&#39;Ettore, who&#39;s done everything at the center from doorman to director in his 53 years of service, said that the jukebox has been with the center for as long as he has. The jukebox has original 45s featuring a wide range of music, from Roy Orbison to Michael Jackson. (Jason Chudy / S&S) 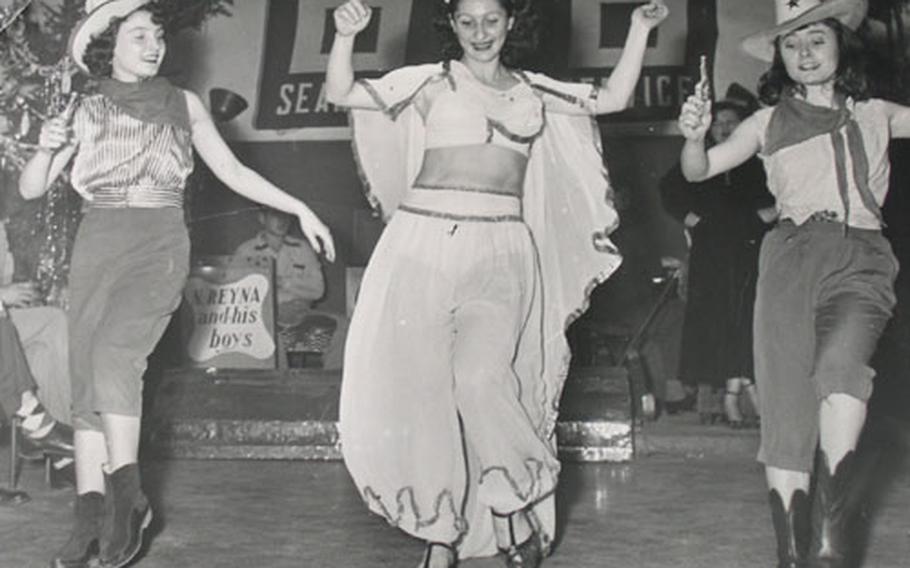 Three women dance at the Naples, Italy, United Seamen&#39;s Service Center in this undated photo. Cruise ships pulling into Naples would send their bands and floor shows over to perform at the club. The club operated at the location seen here in Palazzo Reale from 1951 until 1997, when it moved into the Naples port. The center closed for good last month. (Courtesy of United Seamen's Service Center) 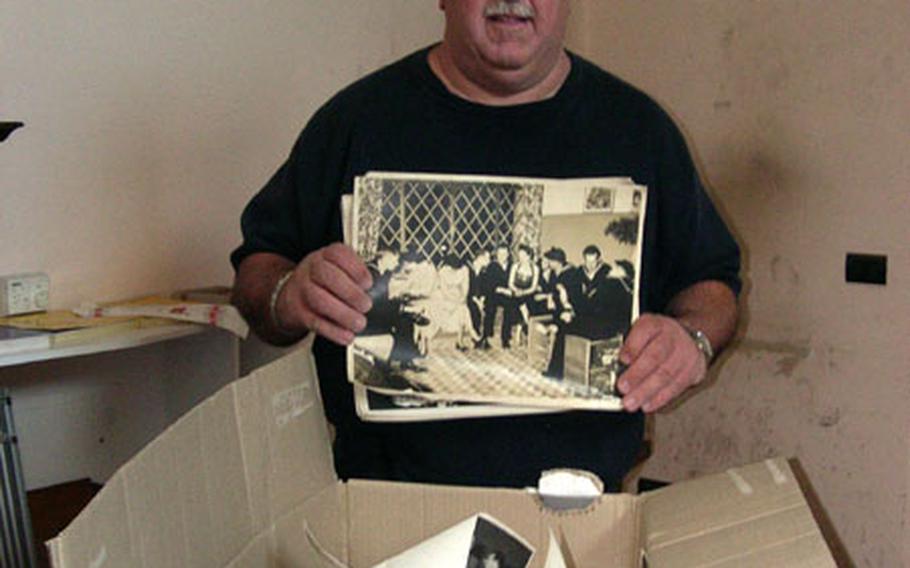 United Seamen&#39;s Service Center director Bill Moerler holds some of the hundreds of old photos taken during the center&#39;s long history in Naples, Italy. Most don&#39;t have any identifying markings or dates, but the large photo he&#39;s holding shows sailors from the aircraft carrier USS Coral Sea. The center closed last month after 50-plus years of service. (Jason Chudy / S&S) Daniele D&#39;Ettore holds a photo showing him receiving a plaque for the United Seamen&#39;s Service Center in Naples, Italy, during his time as director from 1974 until 1982. (Jason Chudy / S&S)

Unfortunately, changes in location and time led to the center&#8217;s April 16 closure.

But for the two-man staff of director Bill Moerler and long-time employee Daniele D&#8217;Ettore, as well as for the hundreds of thousands who stopped in during the center&#8217;s nearly 54 years, the memories will remain.

Romano first visited the center as a seaman apprentice in September 1973, returning more than a half-dozen times since.

The center started out in the Galleria Umberto I in 1950 and moved to the former horse stables of the Naples Palazzo Reale (Royal Palace) a few blocks away the next year.

Palazzo Reale, which was home to the Bourbon kings in the 1800s, became home to the center until 1997. Its location was an easy stroll from the Navy&#8217;s fleet landing.

During its heyday, the club drew hundreds of people a night. When an aircraft carrier came to visit, thousands would pass through the doors each day.

Romano also visited Naples, and the center, with the aircraft carrier USS Forrestal in 1978.

D&#8217;Ettore has worked at the center for 53 years, doing everything from doorman to director. His wife, Elena, cooked in the center&#8217;s kitchen for 45 years, only hanging up her apron last month.

Those carrier visits, Moerler said, could earn the center enough money to operate for three or four months.

The center wasn&#8217;t only popular with the Navy. Visiting cruise ships would send over their bands and stage shows to perform. Hundreds of undated photos, many showing musicians and high-kicking dancing girls, sit in a box at the center.

D&#8217;Ettore remembers many popular Italian singers performing at the club, too.

Many visiting politicians and dignitaries also stopped in. For example, the center, in conjunction with the United Service Organizations, hosted President Clinton&#8217;s secretary of defense, William Cohen, and his wife for dinner.

The center at Palazzo Reale was a top Naples nightspot for military and civilian alike, said Moerler. Though the general public couldn&#8217;t enter the club, a young woman on a sailor&#8217;s arm wouldn&#8217;t be denied admission.

For many years, though, the city government wanted the center gone.

One reason, Moerler said, was because of Naples&#8217; desire to reclaim and restore Palazzo Reale.

Another reason, although it was never publicly acknowledged, was that the center drew sailors and other mariners away from local businesses. Prices for beer and food were cheaper at the center because of its nonprofit status and low rent.

In 1997 the government succeeded in their attempts and forced the center to move into the port itself. The move, which took them about three kilometers from the Navy&#8217;s fleet landing, eventually helped kill the center for good.

During a visit by the aircraft carrier USS Enterprise and cruiser USS Gettysburg earlier this year, not one sailor stopped in.

Not only had the center&#8217;s location changed, but also its clientele.

Now, Moerler said, sailors and civilian mariners don&#8217;t drink like they used to, nor do they want to spend their short port visits in a bar.

That time spent drinking could not only cost a lot of money, it could cost a career. Civilian mariners could lose their license for being intoxicated at work while military members can be reduced in rank for even a first infraction.

Navy ships also don&#8217;t make port visits to Naples like they used to. In the past few years only a handful of ships have stopped in Naples, including only two aircraft carriers.

Even the merchant ships have changed operating schedules. More time in port means less time at sea making money for their owners. Some ships aren&#8217;t even in port long enough for the crews to get off. And when mariners would stop in, they&#8217;d buy items that didn&#8217;t earn the center enough money to survive.

So now, Moerler will move on to a seamen&#8217;s center in Germany and D&#8217;Ettore will run his family bar. Everything left in the club will be sold or moved to other centers.

The United Seamen&#8217;s Service was started in 1942 as a nonprofit, nonsectarian organization to provide health, welfare, education and recreational services to the men and women of the American Merchant Marine and seafarers of other nations.

Since then, the USS has increased its customer base. It serves American seafarers and their family members, U.S. military and government civilians as well as seafarers of other nations and people working in the maritime industry.

Two USS centers in Genoa and Naples, Italy, have closed within the past year.

Books in the libraries are kept up to date by shipments from the USS-affiliated American Merchant Marine Library Association.

Center personnel also provide an outreach program that brings USS services to seafarers aboard ships, in hospital or even jail.

Both U.S. Public Law and Department of Defense regulations establish &#8220;cooperation with, and assistance to&#8221; the USS in support of its mission.

The Navy&#8217;s Military Sealift Command Europe has close ties with the USS, serving as its liaison with the Naples military base.

&#8220;Over many years MSC Europe, as with MSC in general, has had a special relationship with the USS,&#8221; said MSC Europe&#8217;s public affairs officer Ed Baxter.

&#8220;They provide a good service, especially in places where a military infrastructure is not available,&#8221; he said about USS.