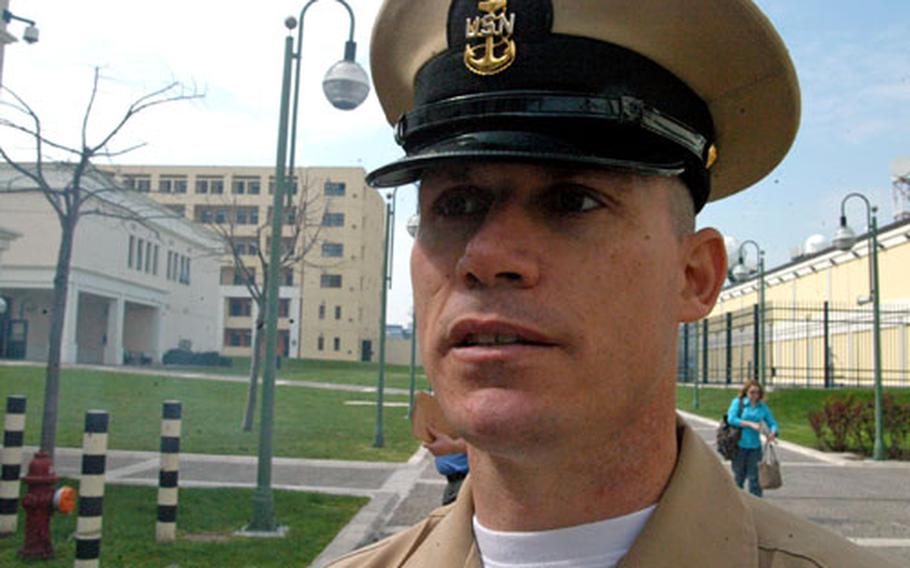 On Friday, chiefs around the world celebrated the rank&#8217;s 112 years of existence. A party at Naval Support Activity Naples closed down the base for half the day.

&#8220;The chief is the person who takes care of the sailors, who trains the junior officers and takes care of everything,&#8221; said Robinson, who trains base security sailors. &#8220;They&#8217;re the technical experts who are praised for their managerial skills and ability to make things happen.&#8221;

No other service makes as big a deal out of making E-7 as the Navy, said David Winkler, a historian at the Naval Historical Foundation in Washington.

&#8220;Unlike other services, there is a significant difference, and it starts with the uniforms,&#8221; Winkler said. &#8220;Uniforms worn in the other services are rather similar for enlisted and officer ranks. &#8230; In the Navy, you have the enlisted up to the E-6 level in the traditional jumper suit, what we call the Cracker Jack uniform, and the Dixie Cup cap. When you make E-7, you switch that out to a uniform closer to what officers wear.&#8221;

Onboard ships, promotion to chief means nicer living quarters, and they even have their own mess where officers don&#8217;t enter unless invited. &#8220;That&#8217;s the place where just fellow chiefs get together, and frankly, is the nerve center of operations on ship,&#8221; Winkler said.

Only in the Navy and Marine Corps, part of the Department of the Navy, do E-6s&#8217; service records go before a promotion board and an arduous promotion process.

While making E-7, or gunnery sergeant, in the Marine Corps also is revered, it&#8217;s for slightly different reasons, one Marine said.