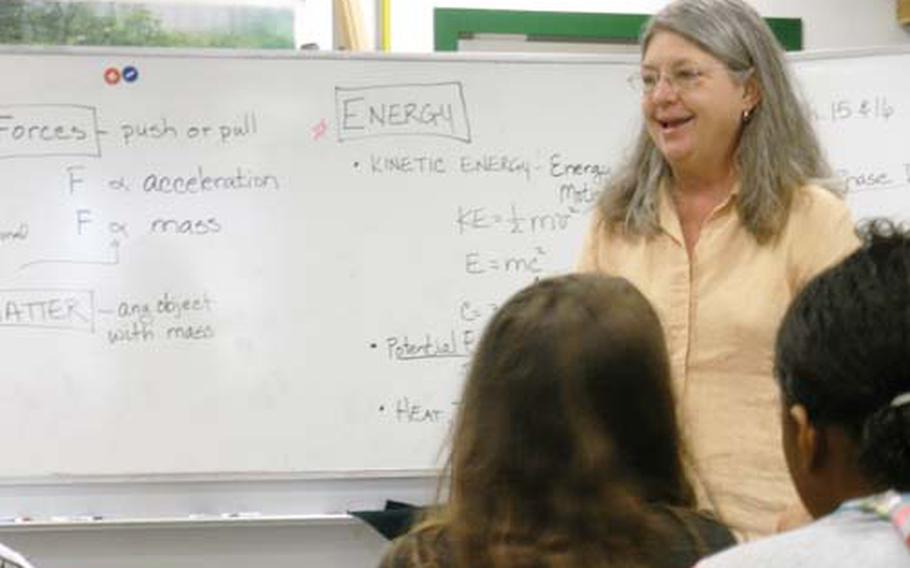 Candace Scott laughs during eighth-grade science class at Naples High School. This summer, she will become the first DODDs teacher to work at the European Organization of Nuclear Research in Switzerland, site of the Large Hadron Collider. She hopes her selection will open opportunities for students to take trips to the lab. ()

But she&#8217;s "fairly certain" the world as we know it won&#8217;t be sucked into a man-made black hole when scientists flip the switch on the Large Hadron Collider and they start smashing protons.

And she&#8217;ll be there &#8212; having finally been selected to study and work this summer with "the big dogs," as she calls them, at the European Organization for Nuclear Research, or CERN, in Switzerland.

The 55-year-old educator is the first Department of Defense Dependents School teacher accepted into CERN.

It took the Naples High School science teacher years to reach her goal.

Scott, passionate for the study of fundamental particles and learning more about the smallest elements of an atom, first tried to visit CERN as a tourist, but was turned away because the center is not open to the public.

Then she decided to apply for CERN&#8217;s teacher-education program. But she learned that as an American teacher working outside of the United States, she was not eligible for any of the European Union teaching programs. And, because she lived abroad, she couldn&#8217;t apply through any Stateside programs.

Then, she came across Horst Wahl, a mentor at Florida State University for the group QuarkNet, which establishes contacts between university physicists doing research in particle physics and U.S. high schools physics teachers.

"She somehow was falling between the cracks teaching at a U.S. school in Italy," Wahl said. He was inspired to help &#8212; and he managed to get her invited by the U.S. CMS group, a consortium of university scientists and teachers, to CERN, in Geneva.

"From her messages and the documentation that she sent me it was obvious that she was an extremely enthusiastic and devoted science teacher," Wahl said. "I was impressed by this and by her perseverance, so I wanted to help her fulfill her dream of getting involved in research activities in particle physics."

This July, Scott will be part of a team of scientists developing software to contribute to the Large Hadron Collider, or the "Big Bang" machine that will beam and smash particles in a 17-mile tube in an attempt to re-create the Big Bang, the scientific theory behind the creation of the universe. The collider is in an underground tunnel straddling the border of Switzerland and France.

Scott started her adult life as an artist, earning a degree in visual arts and interior design from Florida State University. Later, she earned a degree in engineering, while teaching science. She eventually landed a job with Florida&#8217;s Department of Transportation building roads and bridges as a design engineer.

Five years ago, Scott, who attended the DODDS school system herself, took a job at Naples High School as a science teacher.

"She can make science real, and make us understand it. I get her again next year, and I&#8217;m pretty stoked."

Ah, next year. If the world as we know it still exists.