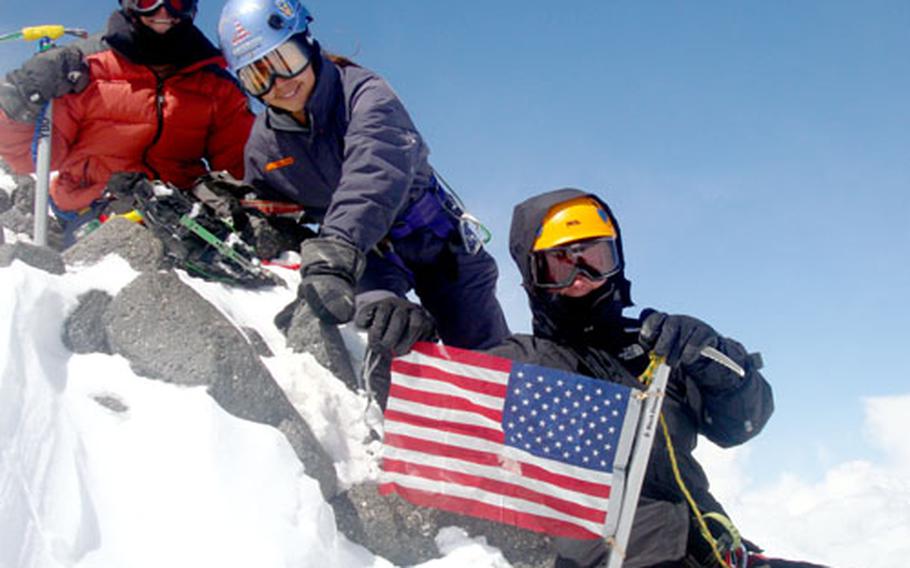 Jodi Pallet, left, Sierra Young-Dong, and Yvonne Dong, right, display an American Flag at the 18,506-foot peak of Mount Elbrus, in the Republic of Georgia, after more than eight hours of climbing on May 22. (Photo Courtesy of Michael Dong)

It was her reward, the 15-year-old Naples High School student said, for the arduous ascent up Europe&#8217;s highest mountain. It took a little more than eight hours to climb, and just about as long to return to the cramped yet incredibly welcoming barrel huts they called home for three nights.

Sierra, mother Yvonne Dong, and family friend Jodi Pallet made up the three-woman ascent team that scaled the mountain on the border of Russia and Georgia on May 22 after months of planning, training and, well, working up the nerve.

"We had a 100 percent summit rate. That&#8217;s really awesome," said Michael Dong, an experienced professional climber (not to mention Yvonne&#8217;s husband) and one of two men who made up the group&#8217;s safety team.

So far this year, six people have died climbing the mountain, he said, repeating information relayed to him by a search-and-rescue employee. Annually, the mountain can claim the lives of 15 to 30 climbers.

"Safety was my number one issue, getting up there and back safely," he said. "Especially because of Jodi. There is a strong connection between us being married."

The climbers mitigated complications and dangers by training and preparing for months, from working out in the gym daily, to weekend excursions to rock-climb or practice using technical gear, to buying all the proper clothing and tools.

"Technically, I felt really prepared for this," said Jodi Pallet, 30, a life skills educator at the Fleet and Family Support Center at the Navy Support Site in Gricignano. "But I don&#8217;t think there&#8217;s enough cardio in the world to get ready for that climb," she laughed.

The climbers acclimated for about a week to the high altitudes at various camps and made climbs ranging from 11,500 feet to 16,400 feet. They fared well, Yvonne Dong said, and suffered only a few low-grade headaches and stomach queasiness.

On summit day, they couldn&#8217;t have been healthier.

The hardest part, frankly, was just putting one foot in front of the other, the women said of the thousands of paces that took them from the main base camp of Azau to the western summit of Mount Elbrus in the Republic of Georgia.

But they kept, both in sight and mind, the summit.

"It was the first time I saw them smile in hours and hours," Michael Dong said during a recent interview with the five-person team.

If they weren&#8217;t so exhausted, they might have appreciated it more, they added.

"And the wind was so strong, it would take your breath away," Yvonne Dong said.