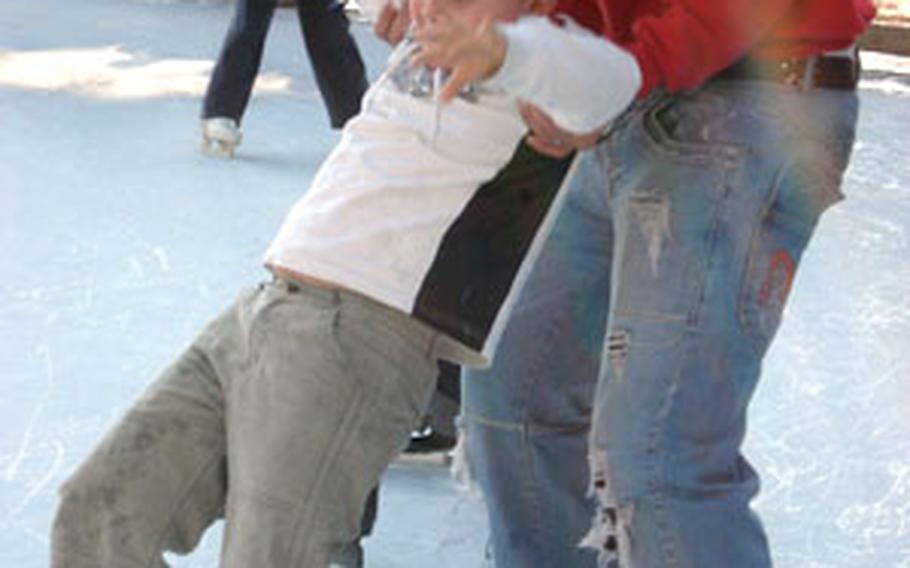 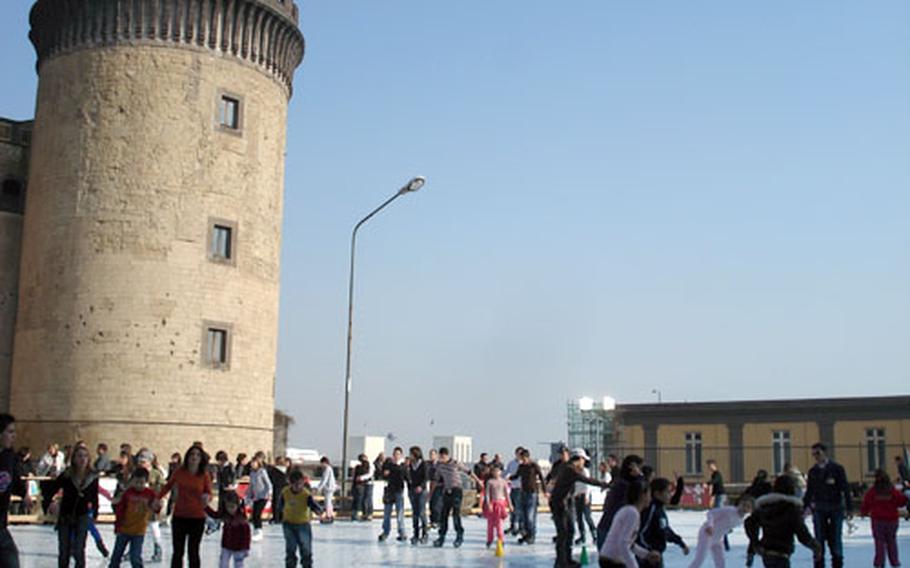 L’Ice Park, a temporary ice skating rink, has been set up in downtown Naples to draw to its slippery surface an array of skating enthusiasts. It’s set up right next to the famous Castel Nuovo. (Sandra Jontz / S&S)

NAPLES &mdash; There is a sliver of a winter wonderland right here in this Mediterranean port city, and you don&rsquo;t have to look very hard to find it.

Nestled next to the famed Castel Nuovo near Piazza del Municipio in downtown Naples is an ice skating rink.

Now, it does get cold here in the winter. Well, cold for some, while others might label the temps as chilly, nippy, crisp or brisk. But in spite of the at-times-near freezing temps, Naples doesn&rsquo;t usually conjure up thoughts of ice skating.

And yet, there&rsquo;s a sliver of a winter wonderland here.

And it&rsquo;s open to the public. For a limited time.

Until March 8, ice skating aficionados, and even those wanting to venture on the slippery, cold surface for the first time, can visit the ice park every day from 10 a.m. until midnight. (Note, the rink closes twice a day for an hour each time for cleaning: from 2 to 3 p.m. and again from 8 to 9 p.m.)

For 6 euros, skaters can take to the rink for 55 minutes. The price includes renting the skates.

The park draws all types of participants &mdash; young and old, male and female, from those who obviously have laced up a pair or two in the past to those who, let&rsquo;s just say, might be out to perfect the butt thump.

Castel Nuovo, the mammoth Neapolitan landmark next to the rink, was built for Charles I of Anjou starting in 1279. Other nearby landmarks include the famed San Carlo Theater and Galleria Umberto.

OK, you won&rsquo;t mistake the rink for one in, say, Switzerland, and while the ice had a bit of an unnatural blue tinge to it and areas looked badly in need of a Zamboni machine passover, it is, after all, an ice skating rink in the heart of Naples.

But for aspiring figure or speed skating stars, hey, it could be cool to say: &ldquo;I got my start &hellip; in Naples, Italy.&rdquo;

Telling an Italian to break a leg, when intending to pass on good luck, could garner you a few stares, if not a slap. Colloquial translations of clich&eacute;s, phrases and sayings differ from place to place.

If you want to send someone on their merry way with your best wishes, here&rsquo;s what to say:

Translation: Into the mouth of a wolf