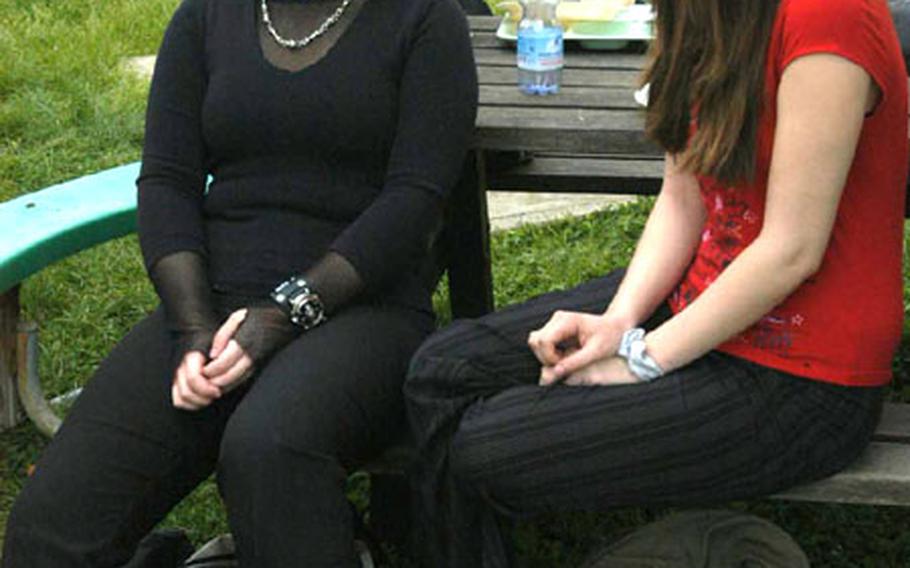 Tenth-graders LaDeanna Spraggins, left, and Amanda Harris sit outside during lunch at Naples American High School in Italy. LaDeanna said that while she understands why revealing clothes are banned, she disagrees with the ban on spiked clothing and doesn’t understand why she was told to remove her watch, which has a skull on it. (Kendra Helmer / S&S)

NAPLES, Italy &#8212; Naples American High School students are being told to leave their spiked and slinky clothes at home.

Administrators at Department of Defense Dependents Schools typically revisit the dress code every year. But Naples administrators said they became especially concerned about what students wear after elementary school pupils said they thought there were high-school gangs.

The younger pupils, called into the office after fighting in March, told administrators their high-school role models dressed like gang members.

&#8220;There really is no gang activity in this school,&#8221; high school assistant principal Cristina Echevarria said. &#8220;We were concerned for the little ones to have perceived that. So we thought maybe we have to look at [how students dress].&#8221;

A recent assembly addressed the dress code. Students were reminded they can&#8217;t wear head covers, including bandannas. Students said that while they were told they weren&#8217;t allowed to wear all the same color, such as black, head to toe, Echevarria said that was not true.

The only change to the dress code prohibits sweatpants.

And with the warmer weather, some students are showing more skin &#8212; sometimes too much, the school said.

Like other schools, Naples prohibits spaghetti straps, bare midriffs, backless tops and shorts or skirts that are shorter than arm&#8217;s length.

Several students said they didn&#8217;t see the necessity of the crackdown.

&#8220;I never saw them (gang members) wearing sweatpants,&#8221; he said, questioning why the school forbids the pants.

Tenth-grader LaDeanna Spraggins said that while she understands why revealing clothes are banned, she doesn&#8217;t know why she was told to take off her watch, which has a skull on it.

Galloway said that while &#8220;the kids for the most part are wonderful,&#8221; the code enforcement is necessary for students to concentrate and to prevent the perception of gang-related activity.

Inappropriately dressed students are called into the office and their parents are asked to bring them appropriate clothing. The school also has T-shirts and hospital scrubs on hand for students to use to cover up.