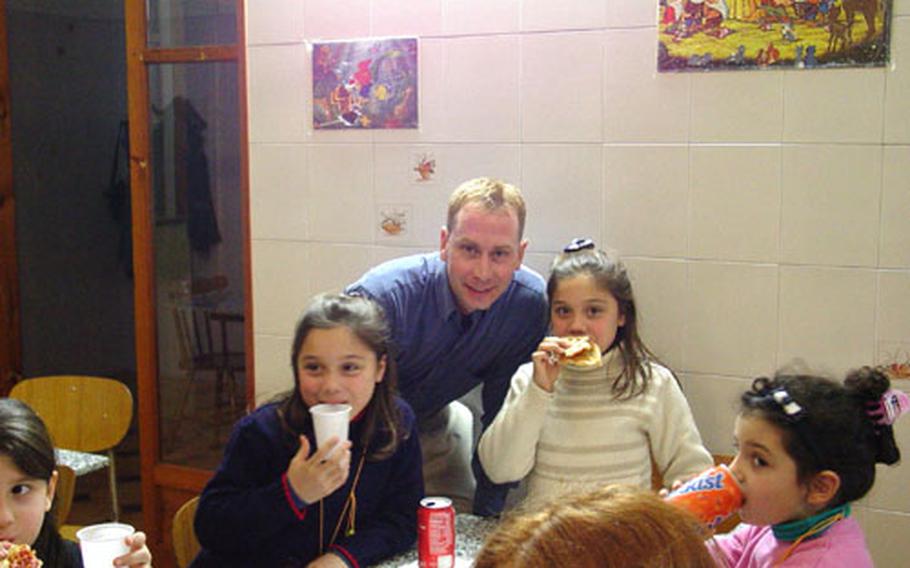 But Petty Officer 1st Class Neal King went beyond that. He adopted a whole orphanage.

King, of the Naples-based Military Sealift Command Europe headquarters, visits the Piccola di Casa Nazareth orphanage in nearby Lago Patria where he is a surrogate &#8220;father&#8221; to its 31 children.

But none of the children will be moving to King&#8217;s apartment in the Gricignano base housing area, because Piccola di Casa Nazareth isn&#8217;t what many in the United States would consider a normal orphanage.

It&#8217;s during those times, when the children are at the orphanage, that King helps out.

In early January, he set up a post-holiday pizza party for the youngsters, complete with gifts either donated by MSC personnel or bought by him and his wife, Sara.

King is looking to help the orphanage with everything from replacing its old computer to holding typical American barbecues.

King will balance his time at the orphanage with time spent with his wife and two daughters, 18-month-old Madison and 2-month-old Emma.

The Kings met and married while he was stationed at Naval Submarine Base Groton, Conn. Sara King is from Providence, R.I. While in Groton, they worked with Special Olympics.

The couple worked with Special Olympics for two years and stopped only when they transferred to Italy in May. Their volunteering spirit followed them.

McJunkin added that King&#8217;s volunteerism is rubbing off on other Americans.

King credits his wife&#8217;s family with his desire to give back to the community.

&#8220;I think it&#8217;s because my wife and I are accustomed to helping with the Special Olympics,&#8221; King said. &#8220;This is a chance to give a little back to the community, to those who may not be accustomed to American help or understand much about what&#8217;s outside their local area.

The Kings&#8217; desire to help isn&#8217;t limited to the Italian community. When King returns from a temporary assignment, he&#8217;ll be reading to children at the base housing area library and his wife will help kids learn arts and crafts.