Naples sailor's life is on remote 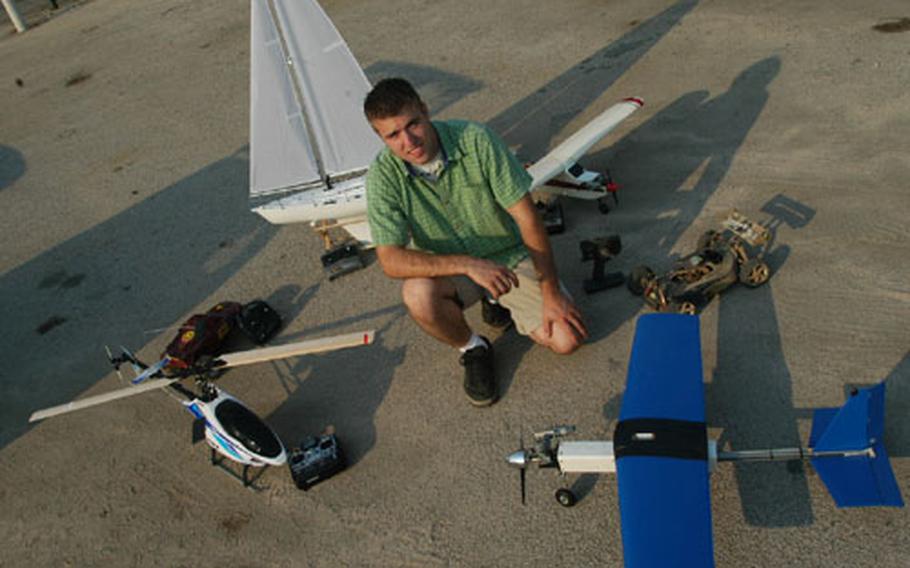 Petty Officer 2nd Class Joseph Wilczek, an electronics technician in Naples, Italy, shows off some of his radio-controlled vehicles. His newest addition is the helicopter one his right. (Jason Chudy / S&S)

The Little Falls, Minn., native is an electronics technician by trade and a tinkerer by nature. He builds then drives, flies or sails his handful of radio control, or R/C, models at and around the Naval Computer and Telecommunications Area Master Station Lago Patria receiver site where he works.

Wilczek&#8217;s gone from motocross as a kid to drag racing Ford Mustangs with his father as a young adult and into R/C models in his junior year in high school.

Since then, he&#8217;s invested thousands of hours, and thousands of dollars, into R/C cars, two planes, a sailboat and his latest model, a helicopter.

Finally, Wilczek made his maiden flight, and maiden crash. There was no permanent damage, just a bit of broken plastic and a little damaged pride.

Crashes, he explained, are part of the hobby. He uses rubber bands to attach the wings of his Cessna aircraft, he explained, to allow easy separation if the aircraft crashes.

The addition of the helicopter to his fleet has taken a bit of money.

Wilczek said he and his wife, Jamie, who &#8220;owns&#8221; her own R/C truck, head to the receiver site to drive and fly. Towering red and white antennas are spread out through the large, brush-filled area, northwest of Naples, which will eventually become the new Allied Forces Southern Europe headquarters.

Jamie said that it was only natural that she got involved in the hobby.

They&#8217;ve sailed only once, however, taking their sailboat to the nearby Lago Patria with a friend.

She later found out there are leeches there. &#8220;Lago Patria is not the best lake to put it in,&#8221; Jamie said succinctly.

Jamie had a different take.

Most of the people he&#8217;s raced or flown with in Italy have been co-workers, some who got interested after seeing his models.

In the three years Wilczek&#8217;s been stationed in Naples he has had only limited contact with Italian R/C hobbyists. They run on-road cars, he said, which are different than his 1/8th scale four-wheel drive car.

The larger 60-size models are able to do aerobatics that real helicopters can&#8217;t do.

First, though, he&#8217;s got to master his smaller helicopter, which has already been glued back into working order.

His dream of 3-D flight will have to start with a simple radio controlled hover.