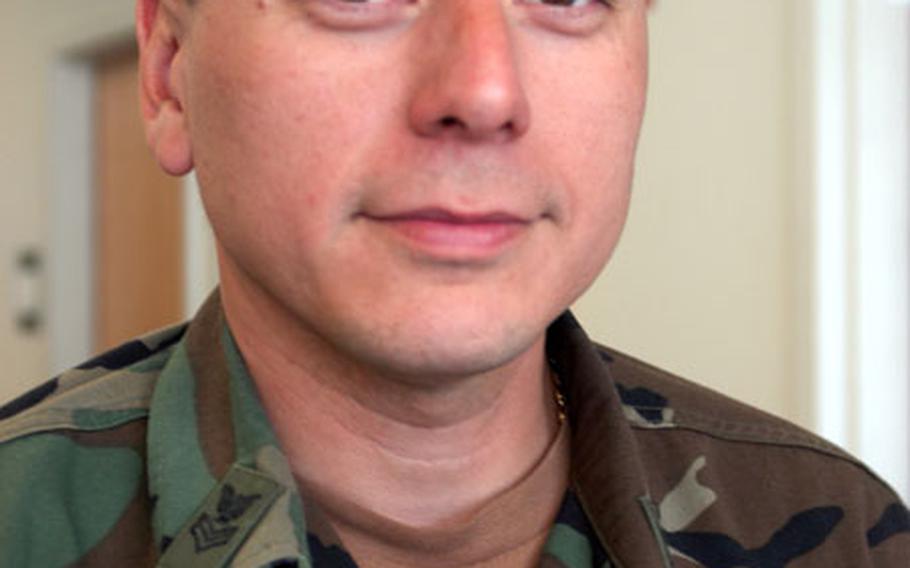 NAPLES, Italy &#8212; Petty Officer 1st Class Marc Medina has had some interesting designations, professional break-dancer and cheerleading coach among them.

He&#8217;s hoping to add Chief of Naval Operations Shore Sailor of the Year to that list.

The 17-year Navy veteran recently beat out four others to become U.S. Naval Forces Europe Sailor of the Year.

The region&#8217;s senior master chief petty officers chose the Naples sailor following uniform inspections and physical fitness sessions. The most grueling, Medina said, were question-and-answer boards, during which sailors were asked about 20 questions on military history, scenarios and current events.

&#8220;Talk about pressure; after 30 minutes, I couldn&#8217;t even remember my name,&#8221; said Medina, who will represent Europe at the competition this week in Washington, D.C. He will compete with the Atlantic and Pacific Fleet Shore Sailors of the Year.

Medina, 35, is the leading petty officer for Seabees in the Public Works Department.

But now he enjoys their style, marching, running in formation and singing cadence for the first time in his Navy career.

He said he thinks his department nominated him for the award because he looks out for his 40 Seabees.

The Seabees division officer said Medina sets an example for others.

&#8220;The energy and enthusiasm he brings to his job, his ability to counsel those that have stumbled and his ability to devote so much of his time and efforts benefits not only the Seabees but also the community,&#8221; Ensign Jason Manus said.

Medina, a member of the 1st Class Association and Latinos Unidos, coaches T-ball. In the fall, he volunteered to coach his daughter&#8217;s cheerleading team. His background as a professional break-dancer no doubt helped, and he researched cheers on the Internet.

&#8220;Aw, man, I caught hell,&#8221; he laughed. Even the master chiefs at the regional board teased him. A female sailor he was competing against also is named Medina.

The Bronx, N.Y., native joined the Navy to learn a trade, not expecting to stay in for long.

He&#8217;s fluent in Italian and Spanish. His wife, Teresa, is Italian, and his dad emigrated from Ecuador and played professional soccer for the New York Cosmos.

He has two daughters, Jessica, 6, and Gianna, 12, and is expecting a third child in the fall. If he wins this week&#8217;s competition, he&#8217;ll be promoted on the spot to chief petty officer.