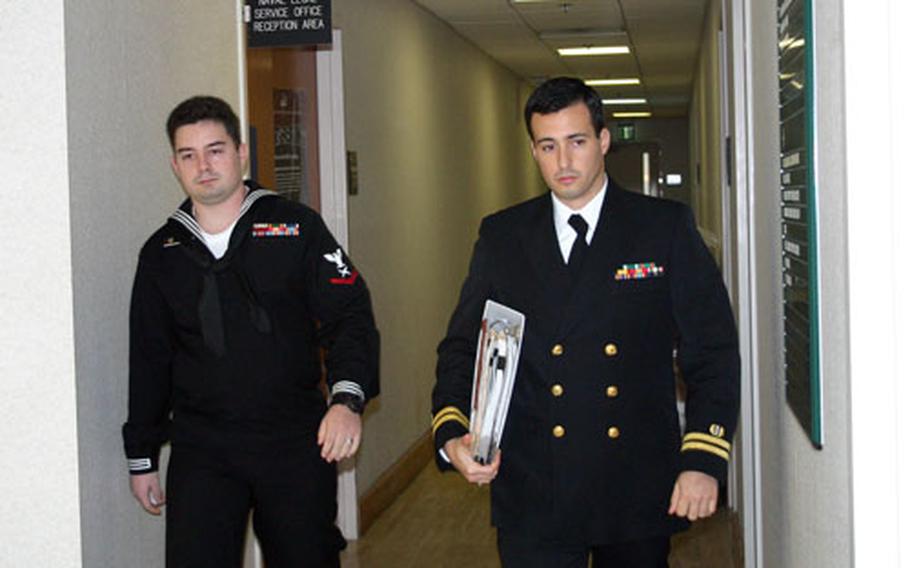 NAPLES, Italy &#8212; A 23-year-old sailor was sentenced Monday to 20 months in jail for downloading child pornography &#8212; both on a personal computer while living in the barracks and from a government computer in a top-secret room on board a ship.

Reading from handwritten notes, Fail asked Capt. Dave White, the military judge, for leniency in his ruling, saying he would &#8220;take whatever punishment as a way to get help,&#8221; but that his wife and infant son &#8220;have already suffered enough&#8221; and rely on him as the family&#8217;s sole breadwinner.

Though Fail faced a maximum of 30 years&#8217; confinement, the prosecution, Lt. Richard Federico, argued that through a plea agreement, the Navy was seeking a maximum of two years in jail.

Fail first was arrested in February 2004 for downloading child pornography from a Navy computer in a room that required top-secret clearance to enter aboard the USS LaSalle, the former 6th Fleet flagship based in Gaeta, Italy.

The cryptologic technician testified Monday that he accessed a pornographic Web site through the ship&#8217;s unclassified system while on duty between Dec. 24, 2003, and Feb. 22, 2004, and downloaded what he thought were images of naked women onto diskettes so that he could view them later. He said the computer system blocked the images from appearing on the computer.

He said he did not know that 40 of the roughly 100 saved images were child pornography until February 2004, a few days before Navy investigators arrested him. When he discovered the disks&#8217; contents, he did not alert authorities or destroy the disks.

During the investigation, he was reassigned to Naval Support Activity Naples, and placed on Class 3 restriction/liberty risk, meaning he could not leave the base without an escort and was subject to a curfew. He worked at the master-at-arms office, where he was in charge of running the engraving services for plaques and name tags, collecting cash from base slot machines and overseeing restrictees, or sailors who have gotten into trouble.

More than a year after the first charges, between July and October of this year and while living in barracks at Naval Support Activity Naples, Fail again downloaded child pornography &#8212; this time, he testified, he knew exactly what he was getting.

Arcati asked the judge for no more than three months in jail, and called Fail&#8217;s 20-year-old wife, Mary Jo Fail, who testified via phone from Lafayette, La., while their infant son made noises in the background, that the family has $60 in their checking account for the month and at least $520 in monthly bills, not counting living expenses such as food.

If Fail moves to Louisiana, he will have to register as a sex offender on the state&#8217;s official registry.