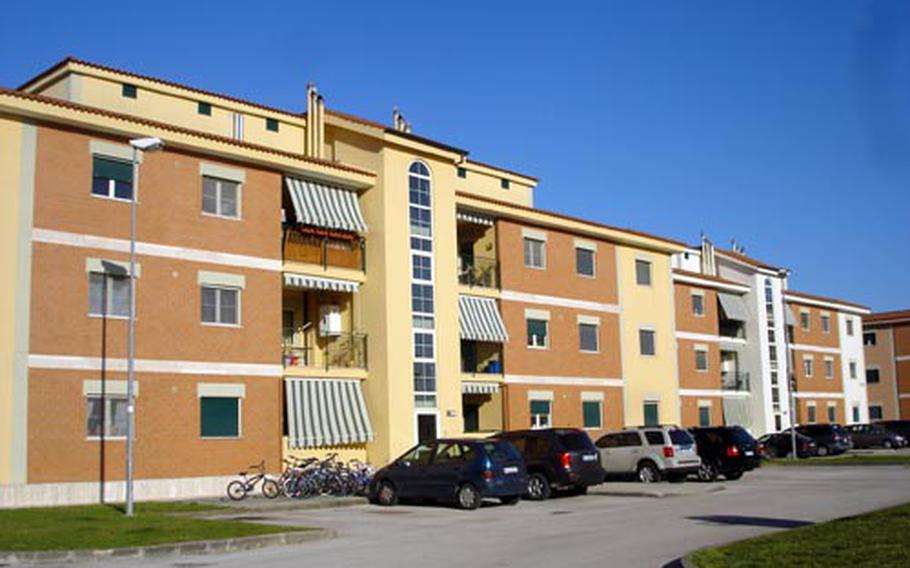 Mandatory assignments to base housing went into effect recently at the Navy’s support site in Gricignano. With that, single servicemembers E-5 and above and single civilians can no longer move on base. (Lisa M. Novak / S&S)

NAPLES, Italy &#8212; The newly enforced mandatory housing assignments policy for Naples means no more single civilians &#8212; or single servicemembers E-5 and above &#8212; will move on base.

Officials had diverted almost 100 two-bedroom units from family housing to bachelor housing over the past two years in an effort to boost consistently low occupancy levels on the support site in Gricignano. When the direct assignments policy went into effect Monday, the remaining vacant, diverted units reverted to family housing, base officials said.

Single tenants already living in the temporarily diverted units will not have to move. But families, as opposed to single occupants, will now be assigned to the remaining vacant units.

The command never actually announced the new restrictions, and that led to confusion among prospective tenants and base housing officials.

Daisy Parrish, a single civilian slated to move onto the base last week from her apartment in Naples, was caught up in the confusion. After the housing office made arrangements for her to live on base, she was told less than two weeks before moving day that the move wouldn&#8217;t happen. She then got a call from the housing staff a week later asking when she would pick up the keys to the base apartment she was assigned. The day she was scheduled to move, base housing staff sent movers to pick up her loaner furniture.

"We have a [direct assignment policy] in place &#8230; here in Naples, we just haven&#8217;t been fully enforcing it to get up to the percentages that we were looking for," said the base commander, Capt. Robert Rabuse. "When we highlight things like that, it gets folks&#8217; attention financially, so the direction we had was, we can do more to fill those empty buildings."

Reports on the low occupancy rates and the fact that U.S. taxpayers are paying for vacant apartments on base got the attention of senior Pentagon officials. A memo issued in November from the Office of the Under Secretary of Defense (Installations and Environment) clarified the policy.

"Misinterpretation of this policy has, in some cases, caused conflict with Status of Forces Agreements," reads the memo, which went on to say where overseas housing allowance is given, the option to live off base should depend on "local factors and host nation agreements."

The overall occupancy rate on the support site is at 87 percent as of last week, housing officials said. Only 75 percent of the two-bedroom units on base are occupied.