Naples Navy Exchange counting down to May 7 opening 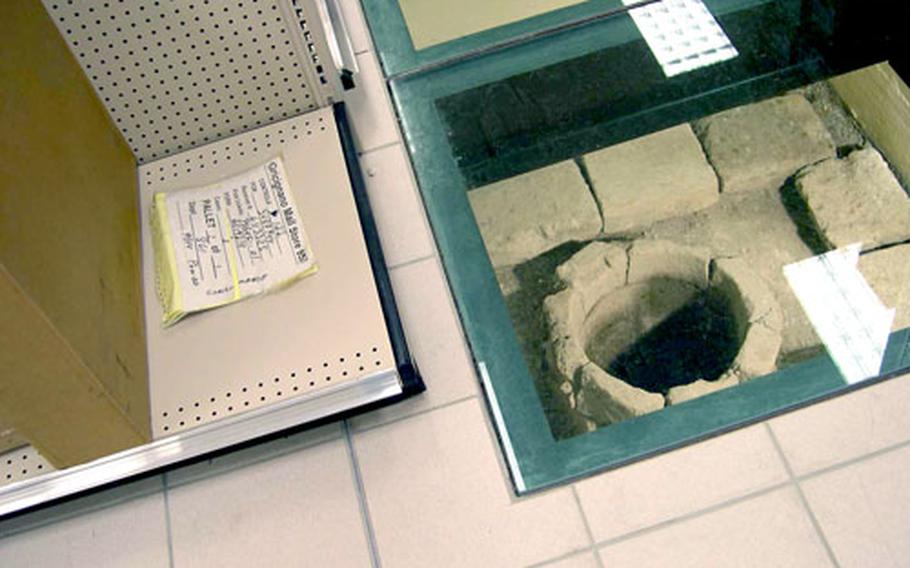 A Roman well sits below glass flooring in the new Naples Navy Exchange. In the commissary next door, a Roman oven sits between two rows of shelves. Archaeological excavations on the site recovered other items, including buried soldiers. (Jason Chudy / S&S)

This baby took years to deliver, but officials believe that once the first phase of the commissary and exchange retail facility opens on May 7 at the Gricignano family housing area, people will believe it will have been worth the wait.

&#8220;This can compete with any commercial store in the States,&#8221; Defense Commissary Agency Europe public affairs officer Gerry Young said Thursday of the new commissary.

Many shelves and freezers are already stocked with non-perishable food, and commissary manager Robert Colella said they&#8217;ll be ready for the opening.

During the tour, Colella said that the facility is among the largest in the DECA system, meaning that the Naples commissary will carry on its shelves all the nearly 10,500 items available to DECA, compared to the 6,700 different items sold at the existing Agnano commissary, which is about a 30-minute drive away and will be closed.

And those new shelves are spread out over more than 33,000 square feet of shopping space, which, according to Colella, is five times the floor space of the Agnano store.

Shelves in the Navy Exchange were being added Thursday as workers from NEX headquarters in Virginia Beach, Va., and other exchange stores unpacked clothing, greeting cards and dozens of other items.

The Gricignano Navy Exchange will have about 75,000 square feet of floor space, compared to Agnano&#8217;s 57,480 square feet. The existing NEX mini-mart on Gricignano will be incorporated into the main exchange and the space turned into what a base fact sheet call a party store, selling drinks and snacks.

It will also sell about 20 percent more items than are available at the Agnano NEX.

A bright atrium leading into the main exchange will hold specialty stores, such as a computer shop and an Information, Tickets and Tours office, and even a Personnel Support Detachment cash cage and ID card facility.

While work is finishing at this first phase of the complex, construction is continuing on the second phase.

This part of the complex, which includes a two-screen movie theater, post office and food court, isn&#8217;t scheduled to open until the fall.

&#8220;It was planned well before the fire that we would break it into two different pieces,&#8221; said Lt. Cmdr. Greg Vinci of the Resident Officer in Charge of Construction, Gricignano.

Officials wouldn&#8217;t give a date, or even a month, for the second phase opening, only saying that it will open in the fall.

Roman history sits beneath the surface of new exchange

As new and state of the art as the Naples Navy Exchange and Commissary complex will be, there is still something old just underfoot.

Part of the delay in construction of the facility, which was originally scheduled to open by 2001, was from extensive archaeological surveying at the site.

Originally there were no plans to do any archaeological surveying, according to information provided by Navy officials, but significant finds at other locations on the Gricignano base led officials to survey the entire footprint of the retail center. The area is the size of roughly 15 football fields.

Most of the surveying, conducted under the direction of the Italian government, was done in 2002 and 2003 by teams of up to 100 archaeologists, surveyors and laborers, and the work yielded some major finds.

Hundreds of artifacts were found, including Samnite tombs and wells dating back more than 2,000 years, the remains of a woman dating back to 5,000 B.C., a Roman well, oven and dwellings, and buried soldiers.

Most of the finds are displayed at the Succivo town museum, a few miles east of the base, but the Roman well and oven were left in place and can be seen by exchange and commissary patrons.

Sheets of clear flooring materials were placed over the well, which is located in the north-central portion of the exchange, and the oven, which is found in the middle of one of the aisles.