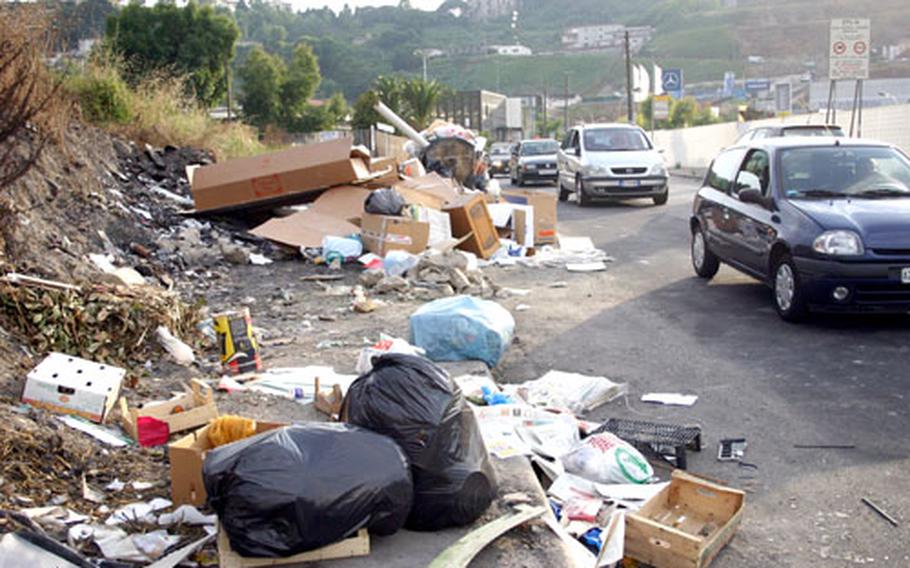 Naples has been ranked as the least eco-friendly European city by Italy’s Environmental Research Institute, which measured quality of air, “green” recreational areas and garbage and sewage maintanence. “Yeah, that’s Naples,” a local sailor stationed in the southern Italian city said when he saw this photograph of piled garbage that litters one of the city’s streets. (Sandra Jontz / S&S)

It simply vanishes, hiding behind a thick layer of smog that settles on this seaside southern Italian city.

That stifling air pollution, in part, lent to the classifying of Naples as the least eco-friendly city in Europe, according to a story published Thursday by the Italian wire news service ANSA, citing a study by Italy&#8217;s Environmental Research Institute in collaboration with environmental lobby firm Legambiente.

To reach its findings, the institute studied 26 cities in Europe, using 20 &#8220;eco-indicators&#8221; to measure how eco-friendly each is in areas such as the number of parks, pedestrian and cyclist zones, the level of pollution, and the efficiency of trash collection and sewage systems.

Naples is home to more than 6,000 Americans, here as military members, dependents, contractors or civilians. The news wasn&#8217;t surprising to those breathing the polluted air and driving past the mounds of uncollected garbage that spill out of trash receptacles and litter roadways.

&#8220;You can tell when you go to another city outside the area,&#8221; said Petty Officer 2nd Class Zachery Metcalf, who has been stationed in Naples for two years. &#8220;After the work days, there&#8217;s always smog covering Vesuvio (Mount Vesuvius). Then, after a good rain, on Sunday, you can finally see the thing.&#8221;

The Navy does what it can to make life better for sailors and their families, said Navy spokesman Chief Petty Officer John Musser.

&#8220;While the environmental study was not conducted by or for the Navy, our personnel and their families stationed in the Naples area have a wide variety of recreational facilities available both at the Gricignano support site and Carney Park,&#8221; Musser said.

This week&#8217;s findings mark the second time in two years that Naples has received low marks for its environment.

In 2004, the Sesto San Giovanni Hospital&#8217;s occupational health department in Milan released results of a pollution study that found Naples residents breathe in the equivalent of nine to 11 cigarettes&#8217; worth of pollution per day. The local government has made efforts to improve the air quality, such as imposing &#8220;black out&#8221; days on driving.

For those in Italy, there&#8217;s always the bright side of travel, Musser said.

&#8220;Personnel stationed in Naples also have the opportunity to experience such beautiful places as Amalfi, islands such as Ponza, Capri or Ischia, or even other cities elsewhere in Europe.&#8221;