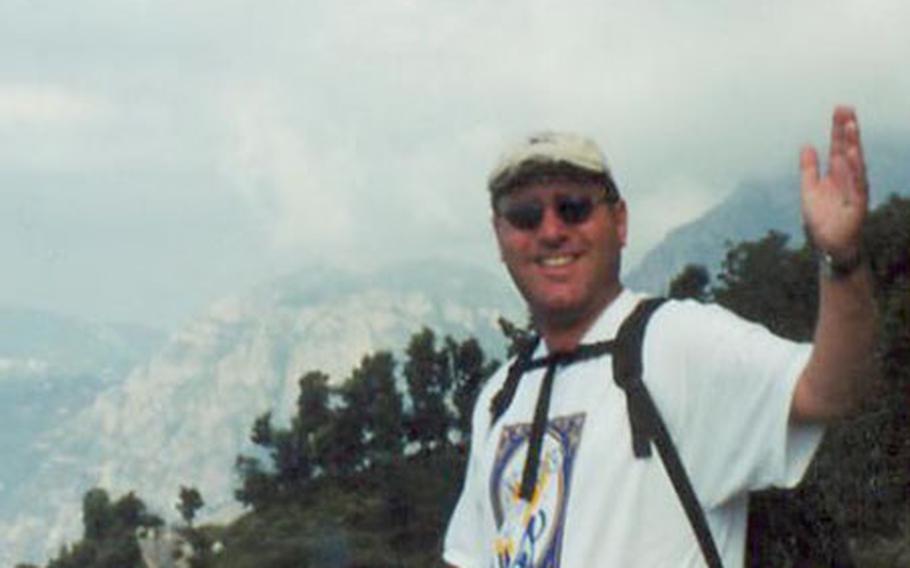 Paul E. Tralmer, who frequently led treks around the Naples, Italy, area, was killed April 16. Friends remembered him Thursday at a memorial service in Naples, Italy. ()

On Thursday, about 200 people attended a memorial service for Tralmer at Allied Forces South in Naples. The day before, friends spoke about the man who founded the park&#8217;s trekking program and kept co-workers at the Navy Outdoor Recreation Center store &#8212; located in the park&#8217;s volcanic crater &#8212; in good spirits.

Kristy Weston, an outdoor recreation aid, groaned at the standard Tralmer set for his fellow workers.

Weston socialized a couple of times a week with Tralmer and his wife, Air Force Maj. Marilyn Hodges.

&#8220;He immediately started his big-brother role when we met,&#8221; said co-worker Jason Weiland, 21, who enjoyed trekking with Tralmer.

Tralmer, an MWR employee for about a year, liked zipping around the park in a golf cart and enthusiastically directing traffic for events. He was a proud member of the Allied Officers Wives&#8217; Club.

Tralmer recently bought lots of brownie mix for an Italian who missed the dessert from her time in the States. He didn&#8217;t know her; they just met on a trek.

That&#8217;s what Hodges wants people to remember about her husband, a Rochester, Minn., native.

&#8220;His smile, his sense of humor, his zest for life,&#8221; she said quietly. She said the dozens of calls and e-mails from friends worldwide hearten her.

The two met about 12 years ago while airmen in Germany. Tralmer originally signed up for the Army. Then he walked past an Air Force recruiter, feet propped up on a desk, reading a newspaper.

In 1995, Tralmer married Hodges, an intelligence officer at the Allied Forces NATO base. He got out of the military to live with his wife.

&#8220;He was most proud of his wife and their relationship,&#8221; Weston said. Strangers often mistook the affectionate couple, who led treks together, for newlyweds.

After three years in Naples, the couple was moving in June to South Carolina, where some of Hodges&#8217; relatives live. Weston was moving there in the fall.

Tralmer joked about living so close to his in-laws and told Weston he&#8217;d better have an escape room at her house.

Hodges asks that memorial gifts be donated in Tralmer&#8217;s name to the family of a Naples sailor killed recently in a motorcycle accident. Though she didn&#8217;t know Petty Officer 2nd Class Keith Demps, Hodges said he left behind children and &#8220;they need [donations] more than I do.&#8221;

Donations can be made at the Support Site Security office, Capodichino Quarterdeck or the Air Force Element at AFSouth.

A funeral will be Tuesday at Torkelson Funeral Home in Tomah, Wisc.