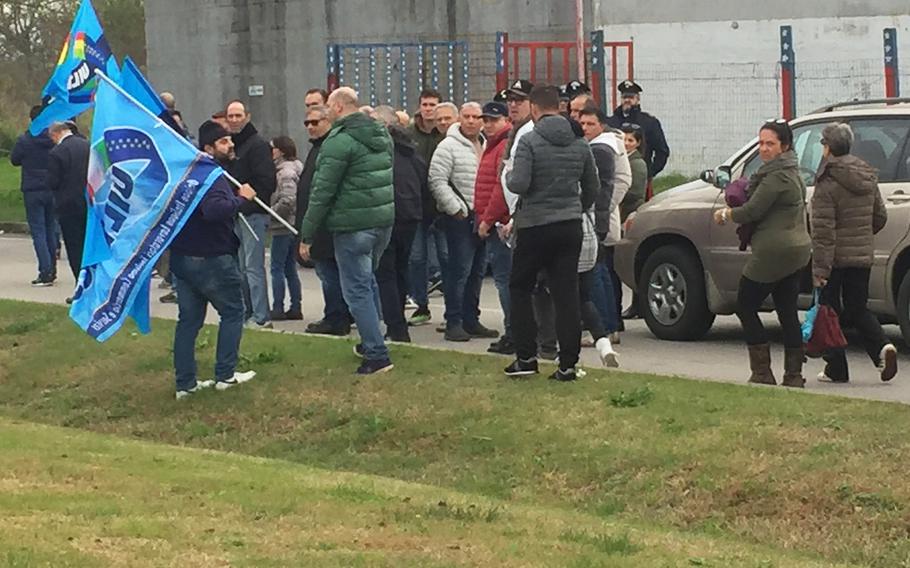 Buy Photo
Striking Italian union workers hinder heavy Black Friday traffic going into the Navy Support Site in Naples, Italy on Nov. 23, 2018. Workers are unhappy about Italian employment levels on base and what they say is lack of communication with managers and human resources. (Scott Wyland/Stars and Stripes)

Buy Photo
Striking Italian union workers hinder heavy Black Friday traffic going into the Navy Support Site in Naples, Italy on Nov. 23, 2018. Workers are unhappy about Italian employment levels on base and what they say is lack of communication with managers and human resources. (Scott Wyland/Stars and Stripes) 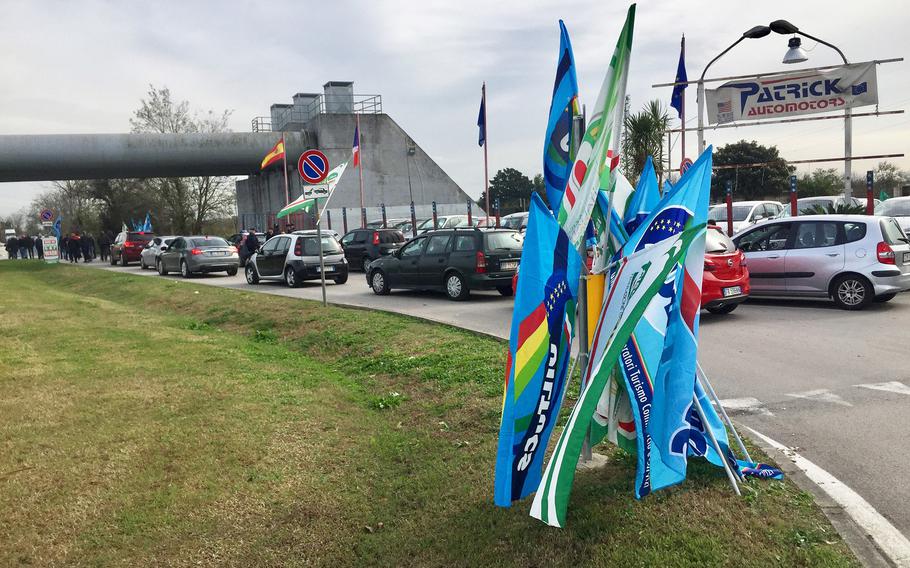 Italian union workers employed at most base departments, including the Navy Exchange and commissary, took part in the one-day strike timed for one of the busiest shopping days of the year.

The strike caused moderate inconveniences for motorists and no reported disruption at the base stores as American employees and non-union Italian workers handled the duties.

Labor leaders said it was a way to express discontent with base managers not addressing their grievances.

“Today we have to strike to have a little more attention,” said Biagio Montefusco, a representative with the Confederation of Italian Workers’ Trade Unions.

The status of forces agreement calls for Italians to make up at least 50 percent of the base workforce, and Italian employment is closer to 30 percent, Montefusco said. Base officials couldn’t be reached Friday for confirmation or comment.

Too many U.S. Navy spouses and children are hired for jobs that Italians should fill, Montefusco said. Base officials weren’t immediately able to confirm those employment figures Friday.

Base jobs are among the few options for dependents in Italy, where the SOFA makes it very difficult to work. Dependents must give up their SOFA status to be considered “ordinarily resident” and eligible for employment, according to U.S. Army Garrison Italy’s website.

In the past six years, Italians employed at the commissary fell to 76 from 116, Montefusco said.

The Navy air base in Sigonella is having similar labor issues, he said. A couple of weeks ago, unions launched a two-day strike to protest plans to transfer Sigonella’s Navy Gateway Inn & Suites to a private contractor who could use non-union labor.

Labor leaders last met with Naples base command on Oct. 17 and no progress was made, said Bruno Mile, a union representative.

The base human resources office is supposed to address Italian workers’ complaints, but often takes no action, Mile said. “You see no will to solve the problems,” he said.

If discussions remain at an impasse, the union will consider more strikes, Montefusco said.