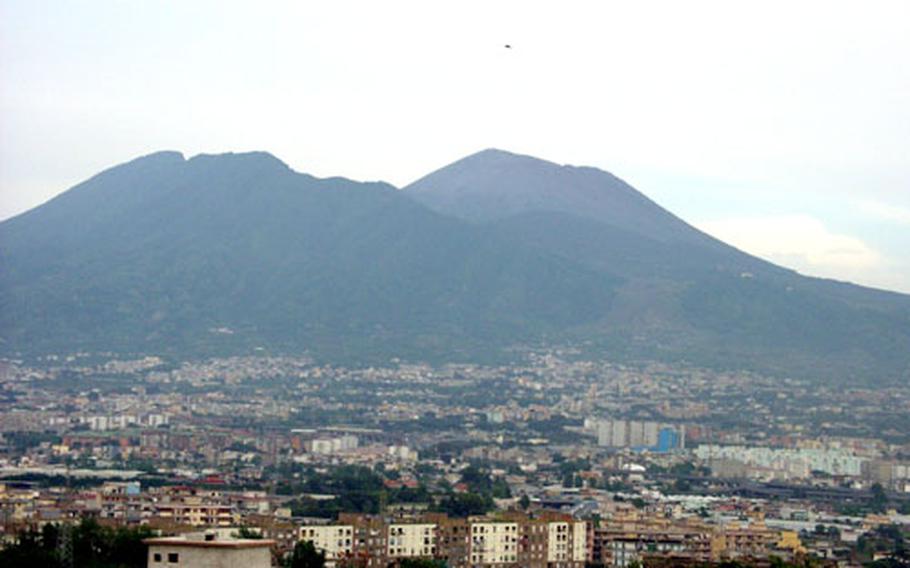 Mount Vesuvius as seen from a parking garage at Naval Support Activity, Naples, Italy, which sits on the outer edge of the deadly “red zone,” a four-mile radius around the volcano. (Sandra Jontz / S&S)

Mount Vesuvius as seen from a parking garage at Naval Support Activity, Naples, Italy, which sits on the outer edge of the deadly “red zone,” a four-mile radius around the volcano. (Sandra Jontz / S&S) 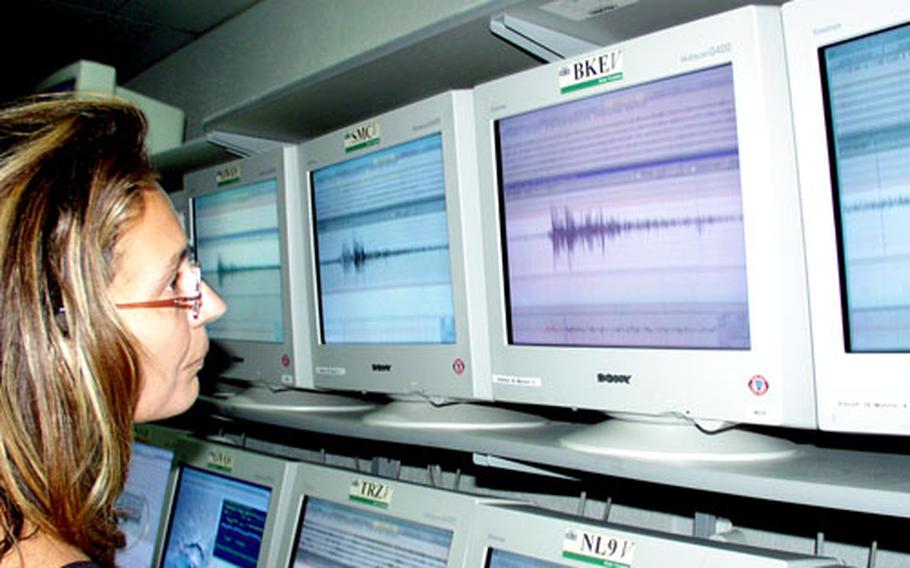 Vulcanologist Flora Giudicepietro, 40, with the Istituto Nazionale di Geofisica e Vulcanologia, monitors the sudden bouncing of the Richter scale needle on a computer screen after an alarm sounded in the institute’s control room. (Sandra Jontz / S&S) 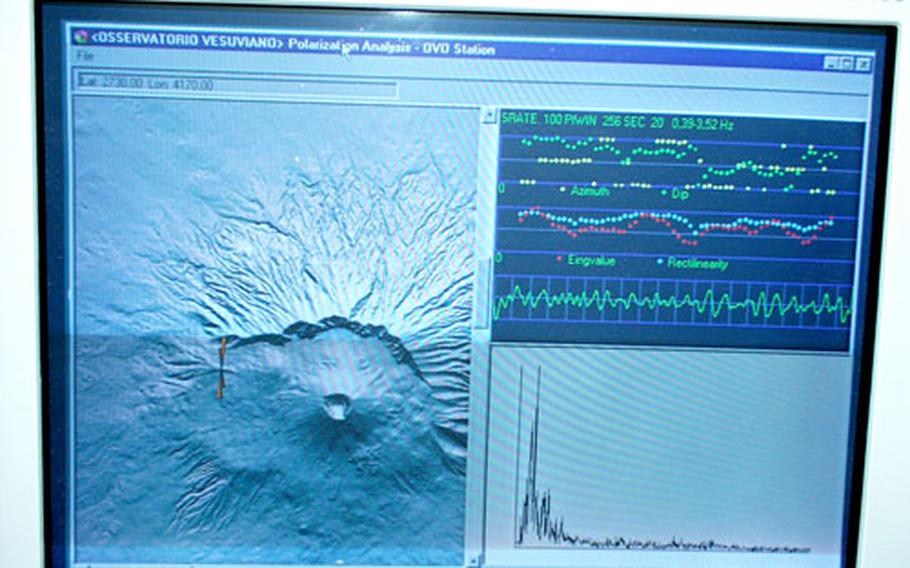 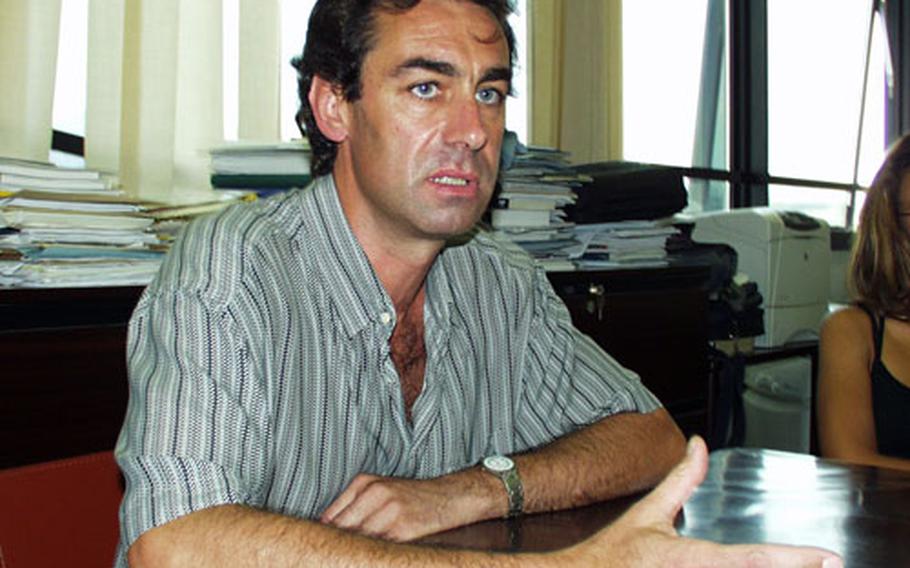 NAPLES, Italy &#8212; As soon as the ear-piercing alarm sounded, scientists scurried in the cramped control room to decipher if the bouncing needle measuring the Richter scale on a sophisticated computer system had logged an earthquake on Mount Vesuvius.

No. False alarm. This time, at least.

A storm&#8217;s thunderclap on the famed Neapolitan volcano triggered a plethora of ultrasensitive sensors on the mountain, setting off the audible warning in the lab less than 15 miles away.

It&#8217;s supposed to do that, said researcher Flora Giudicepietro of the Istituto Nazionale di Geofisica e Vulcanologia &#8212; National Institute of Geophysics and Vulcanology &#8212; headquartered in the Fuorigrotta area of Naples.

Twenty-four hours a day, seven days a week, teams from the institute&#8217;s roughly 100 researchers and technicians monitor seismic activity. They are looking for changes or deformities in the ground caused by earthquakes, and changes in the temperature and chemical composition of gases emitted from the active volcano near Naples, an urban area home to two U.S. Navy bases and about 10,000 sailors and their families.

Contrary to popular myths of gloom and imminent doom resulting from an eruption similar to the one in 79 A.D. that buried Pompeii and Herculaneum, Vesuvius isn&#8217;t going to spontaneously blow. That&#8217;s according to Giovanni Macedonio, director of the institute that began in 1841, making it the oldest scientific institution devoted to the study of volcanoes.

Surfacing lava would have to break through encrusted rock covering a chamber between four and 6&#188; miles below the mouth, he said. There would be earthquakes and gases would seep through cracks, sending a warning to those keeping watch.

Vesuvius was born out of the eruption of the now-extinct Mount Somma, which emerges from the ground next to Vesuvius and makes up the double-peaked mountain that Italians jokingly and affectionately call the breasts of Italian actress Sophia Loren.

Still, the threat Vesuvius poses should not be taken lightly, said Tim Eckert, emergency management officer for Naval Support Activity, Naples, who visited the institute last week for a tutorial on the volcanic monitoring system.

He monitors the monitors, so to speak. He watches the institute&#8217;s Web site, which posts in real time all its monitoring activity.

If the need arises, base officials will yield to the institute&#8217;s evacuation plan, he said, so he needs to know how data is gathered.

Although it is the &#8220;most risky,&#8221; Vesuvius is only one of three active volcanoes in the area that pose a threat, said Macedonio, who speaks English. Researchers also monitor the Campi Flegrei, or Phlegrean Fields, volcano and one on the resort island of Ischia.

Because of its vicinity to Campi Flegrei and the Solfatara crater, the town of Pozzuoli, home to about 2,000 Americans, is an &#8220;area of maximum uplifting,&#8221; said Macedonio, referring to the lifting of the earth&#8217;s tectonic plates. The earth in the region constantly experiences a rise and sinking of the ground.

The Ministry of Civil Protection, based in Rome, has an emergency eruption plan that details where the more than 600,000 residents who live in the &#8220;red zone&#8221; of Mount Vesuvius would go should they be evacuated.

NSA Naples&#8217; base at Capodichino, the closest to the volcano, is on the outer edge of the four-mile radius around the volcano that makes up the &#8220;red zone.&#8221; Residents would have to evacuate because of the deadly pyroclastic flow, a rapidly moving mixture of ash and suffocating gases that kills anyone in its path.

Despite its looming danger, there&#8217;s a lure to Vesuvius, and a relationship between local people and mountain that is akin to a love affair. Vesuvius is respected for its power, not feared, said Ciro Di Sarno, who lives in the San Sebastiano Al Vesuvio area.