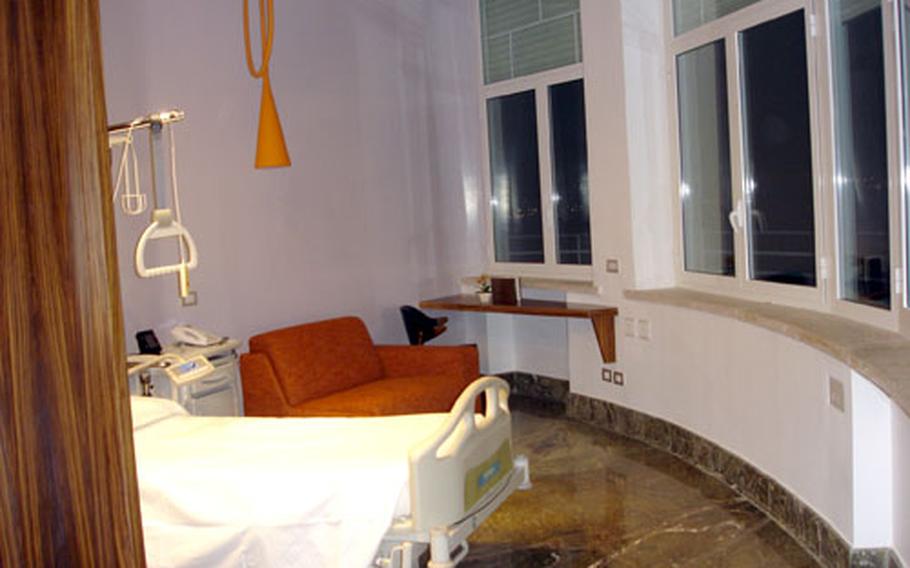 Private rooms in the newly renovated wing of Clinica Mediterranea, a local hospital used by the U.S. Navy. The rooms also include a private bathroom and flat-screen televisions. (Lisa M. Novak / S&S)

Private rooms in the newly renovated wing of Clinica Mediterranea, a local hospital used by the U.S. Navy. The rooms also include a private bathroom and flat-screen televisions. (Lisa M. Novak / S&S) The hospital, located in Mergellina near the American consulate, is one of several in Naples that offers emergency care for U.S. personnel that the hospital on the Navy support site in Gricignano is unable to provide.

With marble floors, sweeping panoramic views overlooking the Bay of Naples and medical attendants dressed like airline stewards, the seven new private rooms look more suited to a five-star hotel than a hospital. The renovations took six months at a cost of 2.8 million euros, according to hospital officials.

Clinica Mediterranea, opened in the 1950s, is a public hospital that also offers private care. The new private rooms cost about 800 euros per night. The rooms&#8217; value lies in the emphasis on patient well-being, according to Capt. Joseph Sarachene, commanding officer for Naval Hospital Naples.

"This facility is an example of a change to health care that includes not just actual treatment and medical care, but patient needs" said Sarachene. "We look at [local] facilities to ensure their level of care is consistent with our standards. Then we can partner with them in order to provide that service to our people."

Some of the services provided by Clinica Mediterranea include a neonatal intensive care unit and a pediatric ward with live streaming video for parents to monitor their children via the Internet after visiting hours.

The hospital also provides a full range of cardiac care on an in-patient and out-patient basis, dialysis, reconstructive surgery, gastroenterology and many other services.

"This hospital has an open-door policy for managed care," said Ralph Sgambato, patient liaison coordinator for Naval Hospital Naples, who has worked with the command for more than 35 years. "The doctors at this hospital work with our doctors &#8212; that doesn&#8217;t always happen at most local facilities."