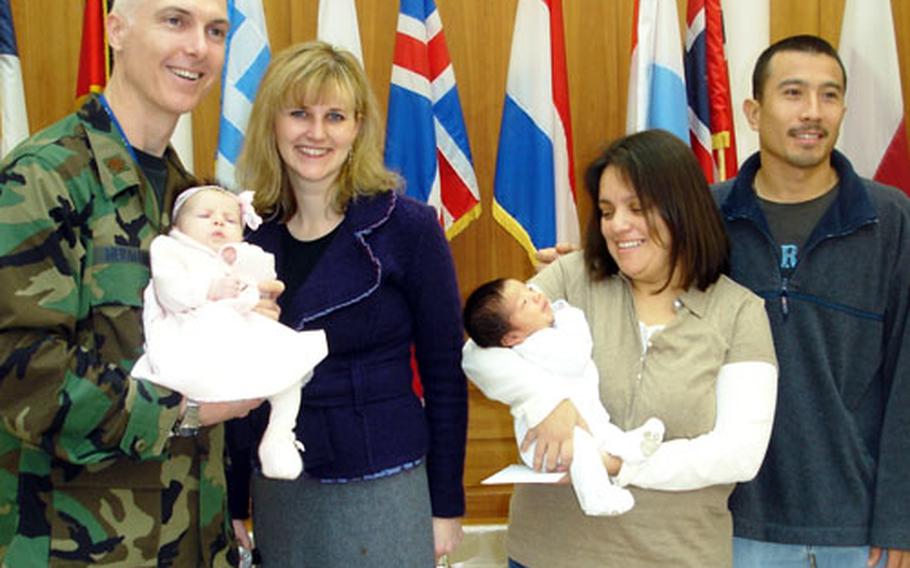 NAPLES, Italy &#8212; Right after the stroke of midnight on Dec. 31, reporters starting calling hospitals to ask when the first baby of the New Year was born. In all the fanfare, the last baby of the previous year is rarely noted.

That is not the case at Naval Hospital Naples on the Navy Support Site in Gricignano. On Friday, the hospital honored both.

&#8220;It&#8217;s a tradition to honor the first and last babies born in our hospital every year,&#8221; said Lt. Cmdr. Johannes Bailey, president of the Naples Area Nurses Association, which sponsors the annual event.

The last baby born at Naval Hospital Naples in 2007 was Sophie Renee Heidmann. The daughter of John and Amy Heidmann was born during an emergency procedure on New Year&#8217;s Eve.

&#8220;The hospital did a great job of bringing Sophie into the world,&#8221; added John Heidmann, an Air Force major stationed at the Allied Joint Forces Command. &#8220;We think very highly of this hospital and the staff.&#8221;

The first baby born at the hospital in 2008 was Samuel Aaron Villajuana May, the son of Navy Lt. Ligia Villajuana and Felix May.

The ceremony in the hospital&#8217;s atrium was attended by about 50 staff members and friends.