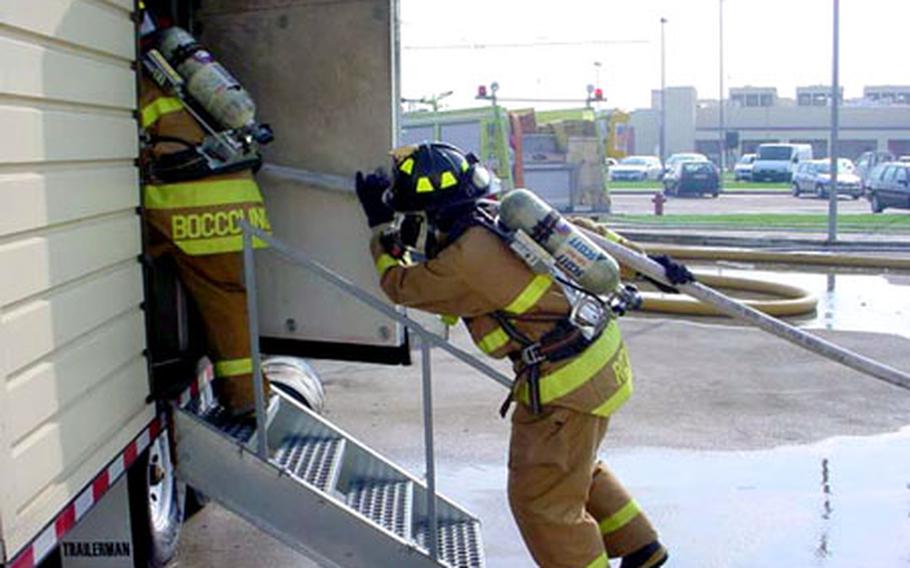 Firefighters from Naval Support Activity Naples enter their “burn trailer” during training near the Gricignano housing area fire department. The NSA Naples Fire Department was recently selected as the best in the Navy and will represent the service in the Defense Department judging Aug. 15 in Denver. (U.S. Navy photo)

The Naval Support Activity Naples, Italy, fire department has been named the Navy&#8217;s Fire Department of the Year for 2004 in its annual Fire and Emergency Services Awards program.

The department and its 58 firefighters were recognized for their work in a wide variety of areas, ranging from their internal training program to their broad community fire prevention efforts.

Morris, who served as the Naples department&#8217;s chief in 2004, said that all of the region&#8217;s departments run similar training and education programs, setting them ahead of many of their Navy counterparts.

Late last year, for example, the Naples and Keflavik, Iceland, departments were awarded Life Safety Achievement awards by the Residential Fire Safety Institute. They were the only two overseas military recipients and this was Keflavik&#8217;s ninth consecutive award.

What may have made Naples stand out, Morris said, was that the department was able to put training into practice after a construction worker started a large fire in a cold storage area for the Navy Exchange food court in September 2004.

The building at the Gricignano housing area sustained about $500,000 in damage, but nobody was injured.

Morris said that through the department&#8217;s internal risk-assessment strategy, they were able to contain the fire early, then further their attacks as other fire departments arrived.

The Naval Support Activity Naples department operated three fire stations in 2004: one in Agnano, which has since closed; one at the Capodichino base; and its largest station at the Gricignano Support Site housing area.

This proved a challenge for the department, as none of the three bases was within 10 miles of each other.

All together, the department was called out nearly 1,000 times in 2004, responding to fires, hazardous-material spills and dozens of cases of people trapped in elevators.