Naples Elementary teacher’s classroom is its own world 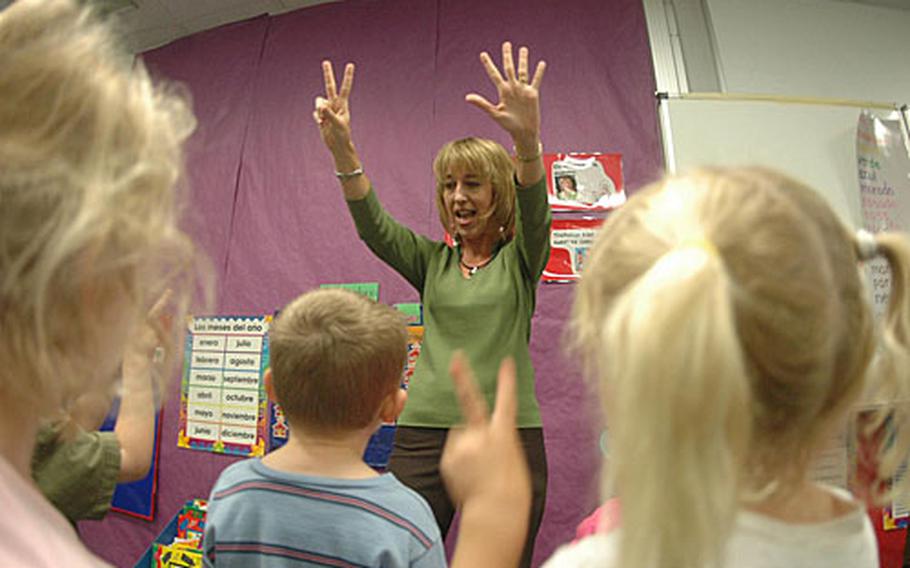 Cathleen Marziali dances and sings in Spanish the “days of the week” song with her kindergarten and first-grade pupils. (Sandra Jontz / S&S)

Soon they stood again, and when Marziali began to dance and sing in Spanish the &#8220;days of the week&#8221; song, they perked right up, getting into the groove of speaking Spanish &#8212; the only language she uses in the Foreign Language in the Elementary School program.

Education officials cited Marziali&#8217;s enthusiasm in naming her the 2008 Department of Defense Education Activity&#8217;s Teacher of the Year.

She has been at Naples for three years, returning to live in the Mediterranean after an absence of more than 20 years. As a college student, she studied for a summer in a foreign language program at the University of Florence and met her future husband while strolling along Via dei Calzaiuoli.

She had studied Spanish and quickly turned her attention to Italian to converse with her husband.

The couple moved to the States and she taught in California in schools with many Spanish-speaking students. For six years of her 20-year teaching career, Marziali also worked the administrative side of education in Hanford, Laton and Lemoore, Calif.

The DODEA panelists, in selecting Marziali, cited her leadership positions on Naples Elementary School&#8217;s technology and school advisory committees and service as the supervisor of student teachers, according to a news release.