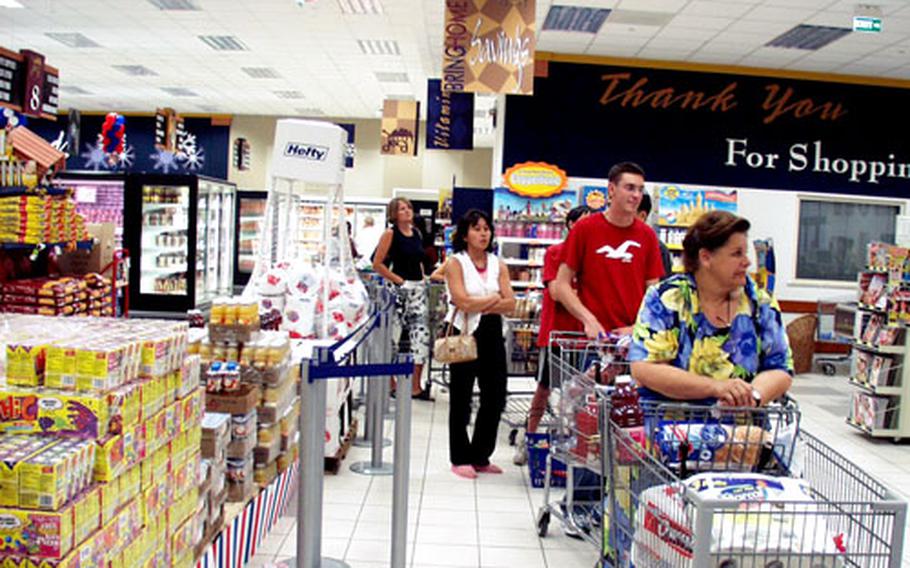 Customers waited in a longer-than-usual line Tuesday at the commissary at the Gricignano Support Site Navy base in Naples, Italy, after Italian employees at the commissary went on strike about 11 a.m. (Sandra Jontz / S&S)

NAPLES, Italy &#8212; Italian commissary workers at the Gricignano Support Site base conducted a daylong strike Tuesday. But despite the walkout, the store remained open.

Employees sought to draw public attention to two labor complaints: one that centers on the termination of two specific employees; the other on the installation of surveillance cameras, which labor union representatives say violate Italian law.

While the strike and protest in front of the main gates to the military base caught some officials by surprise, union representatives Thursday had filed a &#8220;state of agitation&#8221; letter, which served as the official five-day notice for a possible strike, said base spokeswoman Lt. Cmdr. Jacky Fisher, and Robert Cloella, the commissary director.

Regional representatives for the two unions that represent all Italian employees on U.S. military installations throughout Italy said the Defense Commissary Agency local national employees voted in favor of the strike during a Tuesday morning assembly because they felt ignored by base leadership.

But when representatives secured a meeting with the new commanding officer, Capt. Floyd Hehe, for next Wednesday, they called off the public protest but kept the daylong strike in place. Shortly after 2 p.m., employees left the support site and went home. Business was expected to return to normal Wednesday.

The workers are protesting DECA&#8217;s plans to terminate two Italian employees who no longer can perform heavy-duty work such as lifting, said union representative Ernesto Festa. For three years, the unions have been asking for the employees to be transferred to light-duty work, such as cashiers, but the request has been denied, said representative Gennaro Di Micco.

The brand-new commissary, which opened to the public May 7, has surveillance cameras that watch both customers and employees in their work environment &#8212; a violation of an Italian law, Di Micco said. Those issues will be discussed with Hehe during next week&#8217;s meeting, base officials said.

The commissary was open &#8220;with limited service,&#8221; Cloella said. The bakery and deli sections were closed.

The longer-than-usual checkout lines didn&#8217;t upset customer Ronnetta Johnson very much. But she had come for a deli platter, and she was disappointed that section was closed.

She found a solution: Colby jack cheese coupled with smoked sausage to complement the spread of pretzels.