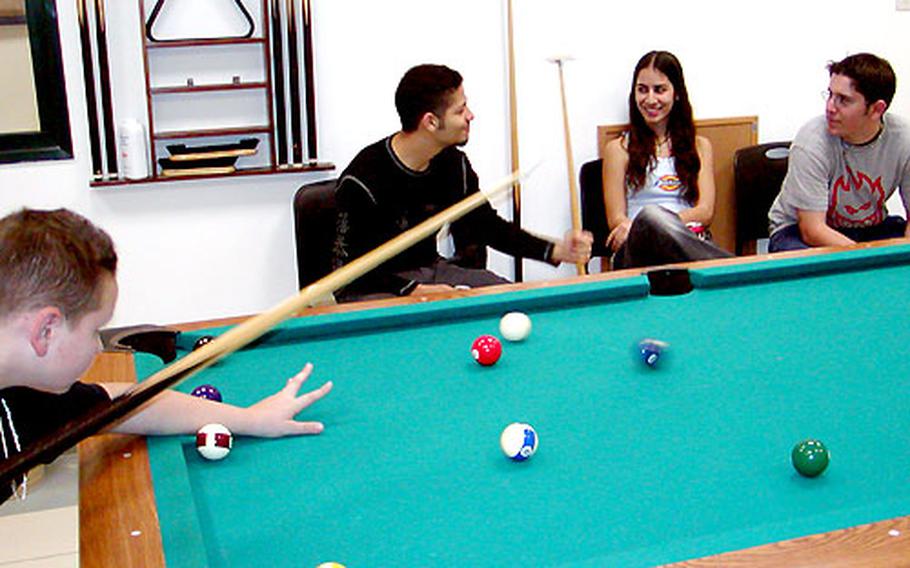 Nick Neumayer lines up his shot in the new Teen Center at the Gricignano Support Site in Naples, Italy, while Xavier Correa, left, jokes with Tamarea Haroian and Richard Johnson. (Leah Bower / Special to S&S)

NAPLES, Italy &#8212; According to many teens in Naples, there has been only one thing to do around the Gricignano Support Site after school gets out. Nothing.

The support site, which has all the on-base housing for families in the Naples area, is not on any major public transportation lines, it is a 20-minute freeway drive from the movie theater at Capodichino, and it is even farther from the center of town.

But a new teen center, a Moral, Welfare and Recreation project, is changing the atmosphere on the base.

The teen center, composed of three rooms and a full-size gym, has anywhere from 50 to 100 young people walk through the door every day, with numbers jumping on weekends and in the late evening, said Soraya Ahrbeson, the center&#8217;s office manager.

The center officially opens Friday, but there has been a steady stream of teens at the center since February.

While video game systems, two big-screen televisions, PG-13 movie selection, and foos-ball, Ping-Pong and air hockey tables are part of the draw, the center&#39;s hottest feature is the gym.

The previous incarnation of the teen center was the size of the new center&#8217;s lobby, Ahrbeson said. The center had much of the same equipment, but couldn&#8217;t host nearly as many teens.

Now carnival decorations in purple, gold and green deck the room with one of the televisions and the 13 computers with Internet connections, while a second movie room gets an Oriental treatment with mini-rugs on tables and Indian-inspired couch covers.

There is little on the walls, however, since the fire marshal had the center remove the cloth wall hangings because they were a fire hazard. A request to paint a mural is still in the works.

Cheap food is also coming soon, Ahrbeson said, but the hot dogs, nacho fixings and other snacks are still in transit.

For a while, morale, welfare and recreation was offering discount pizza slices from the Noble Roman&#8217;s on base, but the practice was halted after a parent complained that she couldn&#8217;t get a pizza at the same price, Ahrbeson said.

Food or no food, the center has helped change attitudes about life on base.

Leah Bower is a news correspondent working out of the Naples, Italy, bureau.