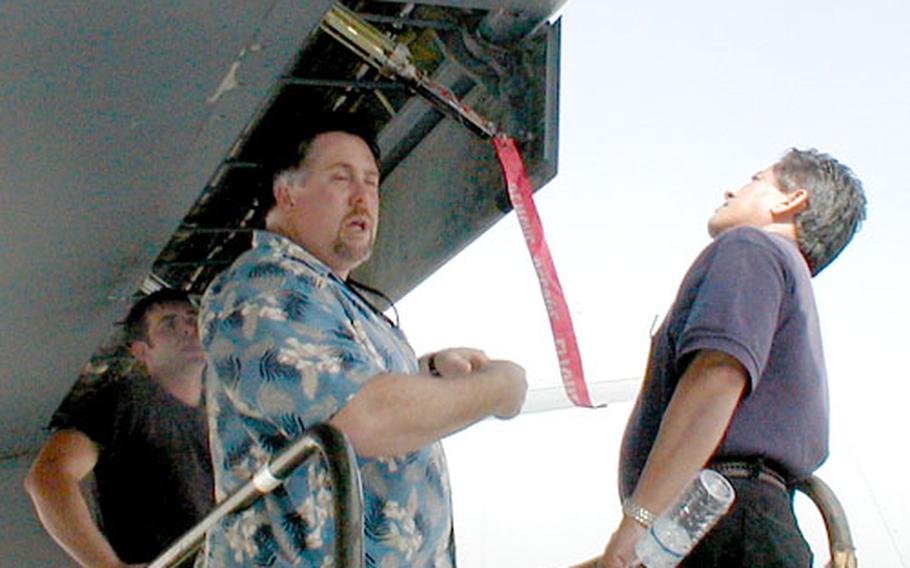 In the desert near the Iraqi-Kuwait border, a Cobra AH-1 anti-tank helicopter had limped back from a mission after taking enough battle damage to guarantee it couldn&#8217;t fly another mission.

The damage was beyond the patching skills of the Marine unit maintaining the helicopter. But members of one repair group deployed to the region had the special equipment and manuals required to to get the copter flying again.

&#8220;Our team went in there during the dark and turned [the helicopter] around so it was ready to go before dawn,&#8221; said Cmdr. Francis Lukenbill from Naples, Italy, where he is in charge of the Naval Air Mediterranean Repair Activity.

&#8220;These repairs are normally done inside, where the floors are white, and it is always clean. The helo was dust-covered.&#8221;

NAMRA, as the unit is known, is the Navy and Marine Corps&#8217; only unit in Europe with the skills and tools to make the complicated structural repairs.

While individual units can patch a hole in an aircraft&#8217;s skin, any damage to support struts, wings and other vital structures is considered depot level and requires a library of books, experience and tools from one of the three giant 6-foot toolboxes that deploy with the Naples-based unit.

Normally aircraft needing depot-level repairs head back to one of the three depots in the United States, or one of the two overseas locations in Italy and Japan.

The unit, which is a mix of Navy technicians and civilian experts, now has two three-man teams aboard the USS Harry Truman and the USS Theodore Roosevelt in the eastern Mediterranean, plus a larger 10-man team in the Middle East that has spent time in Bahrain, Kuwait and southern Iraq.

The unit normally has a staff of 28, including seven civilians, but wartime has swelled its numbers to 52.

Repairs that NAMRA teams handle that change the structure of a plane or helicopter must be approved by an engineer before the depot technicians start work to ensure the changes don&#8217;t affect the aircraft&#8217;s flight.

Alex Balce, a civilian engineer deployed by NAMRA to Bahrain, ended up doing more than his typical duties when the Air Force borrowed his expertise for a repair to two KC-135 refueling tankers, which had each developed 2&#189;-inch cracks in one wing.

Rather than ground the planes, Balce&#8217;s credentials were forwarded to his Air Force equivalents in the States for review and approval.

Another tanker plane, this time from the Navy, required repairs after its refueling hose was reeled back into the plane too fast, cracking internal structures.

In addition to the special tools needed for each aircraft, there are enough manuals and updates on repair procedures to fill several ceiling-to-floor bookshelves in the Naples office. But almost all the manuals are available electronically through the Internet or on CDs, Balce said, reducing the number of books dragged out on a deployment.

It also means, he said, that planes get repaired whether the right manual was along for the ride or not &#8212; as long as an Internet connection is working.

Seeing a repaired aircraft that wouldn&#8217;t have flown otherwise head out on its next mission is extremely fulfilling, Balce said.

Leah Bowers is a news correspondent working out of the Naples bureau.

Sailor's first deployment is as a civilian

After eight years of active duty in the Navy and another 20 years as a reservist, 53-year-old Alex Balce got deployed for the first time &#8212; as a civilian.

Balce, an aerospace engineer, is one of seven civilians assigned to the Naval Air Mediterranean Repair Activity in Naples, Italy.

He&#8217;s also one of the few civilians serving alongside the military during the war, an experience, he said, that has been both frightening and fascinating.

But Balce said his age, a couple of decades older than many of the young men and women deployed to the area, made the tour rougher than it would have been when he was still enlisted.

Balce and other civilians assigned to the Naples repair activity may be returning for another tour in the region. He said he might head to Bahrain in June.