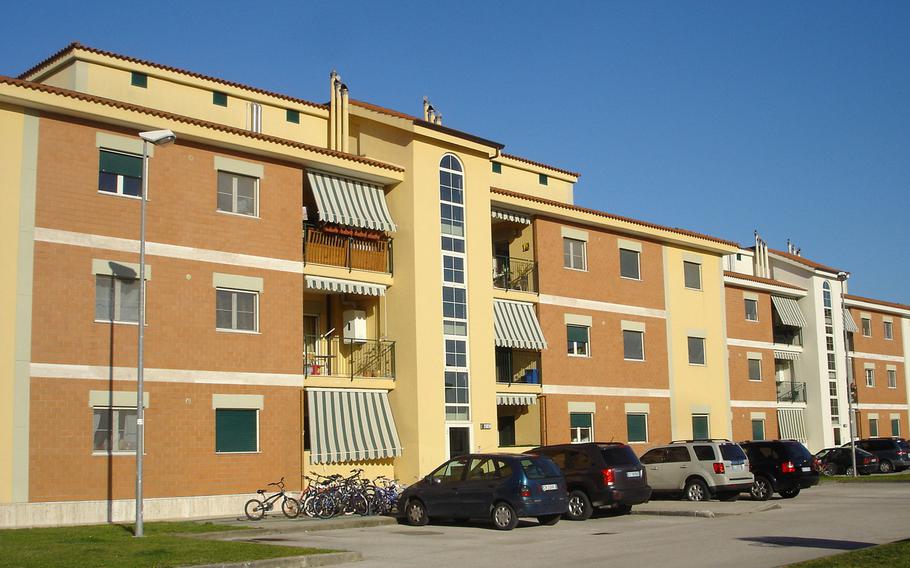 Enlisted sailors living in the main barracks at the Naples base are moving into housing units like these, on the Navy's nearby support site in Gricignano di Aversa. A cost-saving measure, the move will put sailors closer to base amenities like the movie theater and bowling alley. (Stars and Stripes)

NAPLES, Italy — The Navy base here is relocating its main barracks in a cost-saving measure that puts sailors closer to amenities such as the movie theater and bowling alley.

Most of the 227 sailors affected have already moved from the enlisted quarters at the Navy’s base near the Naples airport to family housing at the support site in Gricignano di Aversa, about 20 miles to the north, said Chief Petty Officer Jacelyne Augustine, who is overseeing the move for the base. The remaining sailors will finish moving next week.

The relocation places sailors into 11 unused family housing buildings at the Gricignano site — housing the Navy is already paying for in its property lease. The Naples base has focused in recent years on filling unused housing in Gricignano.

The move is expected to save the base an estimated $450,000 annually, officials say. That figure takes into account the vacancy of the old quarters, which will remain connected to electricity and water, and expanded bus service to ferry sailors between bases.

The new housing is a collection of two-, three- and four-bedroom apartments known as the “Triangle.” Sailors in grade E-3 will share rooms, while those in E-4 and E-5 will occupy single rooms. Single sailors at E-4 and below are required to live on base.

Sailors will have more space under the new arrangement, Augustine said, with full living rooms, balconies and larger kitchens.

They’ll also be in closer proximity to the Navy Exchange, the commissary and a full-sized gym. The airport site, home to the base’s tenant commands, offers little beyond a Mini-NEX, which closes in the evening, and a food court with few nighttime options.

Sailors will have better furnishings in the Gricignano quarters: The Navy’s installation command has purchased sofas, recliners, patio furniture, TVs and Blu-Ray players for the apartments, Augustine said.

The Gricignano site was already home to 146 enlisted sailors assigned to the U.S. naval hospital and other commands. Fifteen of them accepted an offer to move into the newer, more spacious housing, Augustine said.