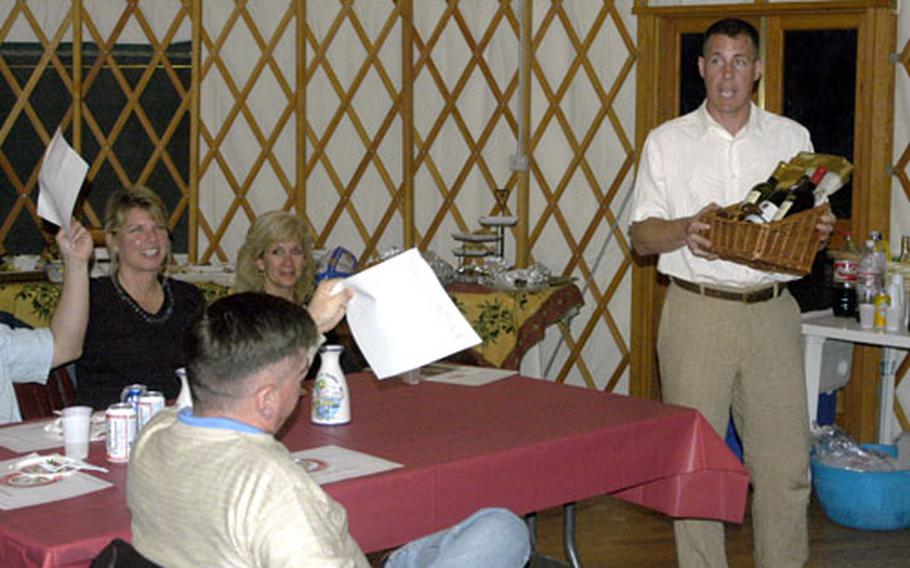 Auctioneer Maj. Jeff Holt holds up a gift basket of wines during bidding at an auction Saturday night to raise money for the Injured Marine Semper Fi Fund. More than $1,400 was raised. (Jason Chudy / S&S)

NAPLES, Italy &#8212; History teamed up with modern&#8211;day generosity to raise funds for injured Marines and sailors.

&#8220;Every Marine, past, present and future, are all part of a family,&#8221; said retired Maj. Scott Olinger about a gathering of the small Naples Marine Corps community Saturday night, which raised more than $1,400.

The Marines, as well as a handful of couples from area Navy, Air Force and Army communities, raised the money in an auction of goods ranging from used golf clubs to Marine Corps memorabilia.

The money will be donated to the Injured Marine Semper Fi Fund, which provides financial grants and other assistance to Marines and sailors wounded in combat or injured in training and their families.

&#8220;This idea of an auction is to pass on from servicemember to servicemember and help our injured,&#8221; said auctioneer Maj. Jeff Holt of Naval Force Europe/6th Fleet Staff plans.

With about 30 Marine Corps families in the Naples area, she said, they had no expectations on what they&#8217;d raise during either auction. About two dozen people attended Saturday&#8217;s auction.

Whatever Hannigan&#8217;s expectations for the auction, those in attendance were more sure.

Some of the higher-selling items involved, not surprisingly, Marine Corps memorabilia.

One package that brought some fierce bidding included a signed Iwo Jima memorial print, a bottle of Fidelis red wine from a nearby winery, a Marine Corps swipe card holder and a bottle of dirt from the Belleau Wood battlefield in France.

Olinger and Capt. Dirk Kuntz bid back and forth until Olinger&#8217;s $140 offer sealed the deal for him.

Out of the few dozen items up for auction that evening, Kuntz had wanted to get his hands on that dirt.

During a previous tour in the Pacific, he collected a bottle of sand from the Japanese island of Iwo Jima and wanted to display the two together.

Kuntz, this time, got his Belleau Wood dirt and the Semper Fi fund got another donation.

The Injured Marine Semper Fi Fund was started by a group of Marine Corps spouses in May 2004 to provide financial grants and other assistance to Marines and sailors wounded in combat or injured in training accidents.

The Navy provides Marine Corps units with chaplains and medical and dental personnel.

The fund&#8217;s Web site states that the Marine Corps can offer only limited funding for family members for a certain period of time, and that funding for immediate expenses is not always readily available.

The fund has given more than $2.7 million in grants to military personnel and their families.

Some of the money goes to families for their expenses in visiting their wounded or injured servicemembers, according to information on the fund&#8217;s Web site, located at: www.semperfifund.org.