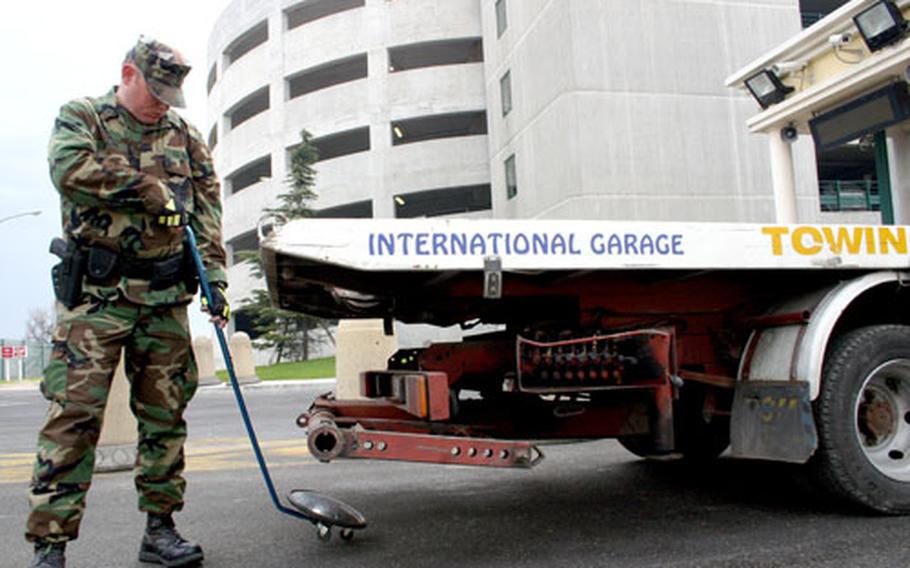 NAPLES, Italy &#8212; The security department at Naval Support Activity Naples is scheduled to lose 44 sailors in the next five months, and the news doesn&#8217;t sit well with the base commander, Capt. Floyd Hehe.

In less than two years, the department has shrunk &#8212; through attrition &#8212; from 374 sailors in fiscal 2004 to 232. By July, the department is slated to shrink to 188 sailors, who must perform jobs ranging from administration to gate guard duty.

But Hehe and Lt. Cmdr. Perry Suter, the security department&#8217;s head, were quick to say the force protection of the base has not been hindered by the downsizing.

What has suffered is what they call community policing &#8212; such as helping residents control stray cats in their front yards or walking through the Navy Exchange scanning for shoplifters.

The Defense Department&#8217;s call on the Navy to provide more ground forces to ease the strain that combat operations has placed on the Army and Marine Corps also has sapped Navy security departments, especially of masters-at-arms, Hehe said.

The downsizing at Naples is the result of a personnel survey done by Commander Navy Installations, Hehe said. Hehe said he&#8217;s asked that another survey be done, but he doesn&#8217;t know if it&#8217;s going to happen.

Naples-based security sailors have deployed to Iraq, Afghanistan, Djibouti and Guantanamo Bay, Cuba. Each time they deploy, it leaves a void that must be filled, he said.

Department leaders have found creative ways to lessen the strain and make sure enlisted sailors don&#8217;t feel the pinch, said Senior Chief Petty Officer Scott Kircher, the operations-leading CPO. For example, they&#8217;ve had to juggle training and vacation schedules between four sections to ensure each 12-hour shift has the proper number of sailors.

They are not out writing as many speeding or parking tickets as they have in the past, although technology such as surveillance cameras has helped pick up the slack, Hehe said.

In spite of the drawdown, Kircher said he&#8217;s never had to deny a sailor&#8217;s vacation request, none is pulling more than the standard 12-hour duties, and the department is recording its highest number of sailors taking college-level courses on their own time &#8212; an indication that sailors have time for extracurricular activities.

But the picture isn&#8217;t all rosy, and some junior sailors have complained about the strain. None wanted to speak on the record for fear of reprisal.

A handful asked, with the department already stressed, how much worse can it get if officials cut another 44 positions?

By getting a new survey completed, Hehe hopes the base doesn&#8217;t have to find out.