Naha plane explosion was a close call for one U.S. military family 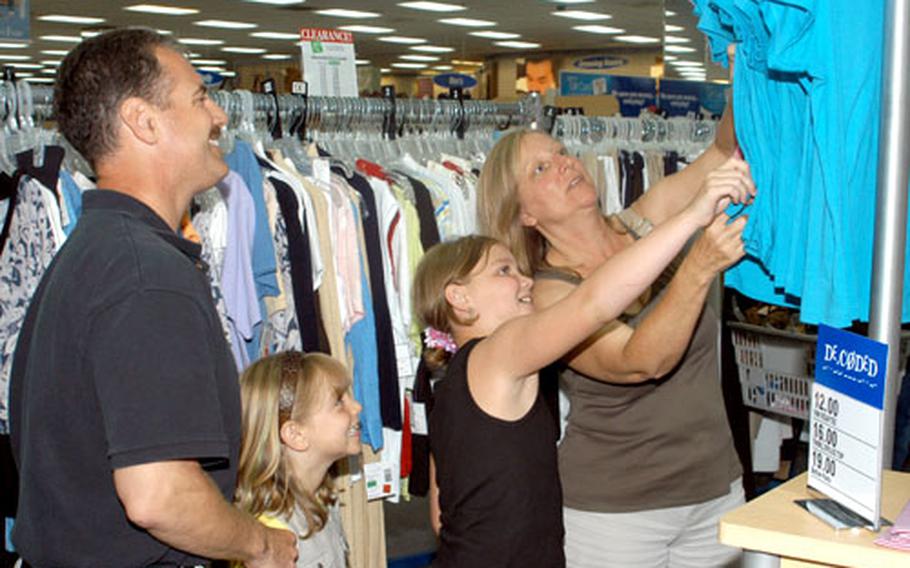 Pamela Caruso, her husband, Navy Capt. Jim Caruso, and their daughters Erica and Amanda shop for clothing Wednesday at the Camp Foster, Okinawa, exchange to replace clothing lost aboard China Airlines Flight CI121. The Carusos were among the 14 Americans on the airplane, which burst into flames Monday shortly after landing at Naha Airport. (Will Morris / S&S)

CAMP FOSTER, Okinawa &#8212; It was getting hotter inside the plane. Outside, the fuselage was sheathed in a rolling, fiery cloud of burning jet fuel. As Pamela Caruso stood in the aisle of the plane with her family, watching the windows crack from the heat, one thought kept running through her mind.

On Monday morning, shortly after landing at Naha Airport, China Airlines Flight CI121 burst into flames. The crew and passengers, 165 people in all, escaped uninjured by sliding down emergency ramps.

Fourteen of the passengers aboard the aircraft were U.S. citizens. All of them are connected somehow to the U.S. military, including a group of Marines, a soldier and least one DOD contractor.

Moments before the fire broke out, Caruso, her husband, Capt. Jim Caruso, a Navy doctor, and their two daughters, Amanda, 6, and Erica, 9, were getting ready to depart the plane after returning from of a two-week vacation to Brisbane, Australia.

But Pamela Caruso, 45, said she knew it wasn&#8217;t going to be a routine arrival when she saw a Chinese woman point at something outside the plane.

Outside the plane, the flame quickly died down and Caruso let go a sigh of relief. But a second later, she said, passengers gasped as an explosion engulfed the outside of the plane in fire.

As fire surrounded the plane, Erica looked out her window and calmly prayed.

Standing in the aisle with the other passengers, Caruso, a critical-care nurse, said she concentrated on what she needed to do to help her family as opposed to what would happen if she couldn&#8217;t.

As the windows began to crack, Caruso feared the worst. She twisted around and saw another woman frantically pointing to an overhead storage bin. Caruso looked up, afraid that the flames from outside had infiltrated into the cabin. Her husband searched in the bin and found a pair of crutches that the woman needed for a man she was on the plane with. He helped the man leave the aircraft.

When she turned back around, she noticed empty places where people had been standing. The emergency exits had been opened. Separated from her children, who were walking ahead of her, Caruso yelled instructions at them, &#8220;Jump on the slide and run.&#8221;

As soon as she saw her daughters running to safety, Caruso slid down the slide, landed on her feet and started running.

When Pamela Caruso was about 100 yards away from the nose of the plane, another explosion rocked the aircraft, sending up a huge ball of fire. She made it to her children and husband unharmed.

The Caruso family lost souvenirs, school supplies and clothes bought in Australia, but feel blessed no one was injured or killed in the fire. They know it could have been much worse.

And Erica said she learned a valuable lesson about life from the fire.